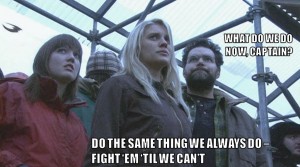 In 1998, I returned to the practice of the Catholic faith. In the same year, I started reading about what was going on in the world.

And it’s all been downhill from there.

The next year, I started working in the political end of the pro-life movement, with the sweet and innocent idea that if you just told people the truth, they would change their minds about the things they believed, and would change their behaviour. They’d stop killing babies and thinking it was OK to kill old people they didn’t need any more.

By 2002, I had learned that this was pretty dumb. I had moved to Toronto and was lobbying the federal government, writing and researching, and finding out much, much more than I ever wanted to know about politics, about the philosophical and moral corruption of the health care world and biomedical research. I liken that part of my education to pulling the camera back, and back, and back… and back… to discover just how huge this cultural catastrophe really was.

In 2004, after removing an episcopal shiv I found between my shoulder blades, (another useful lesson learned there) I decided to retire from lobbying. I started doing the news, which, in retrospect, probably wasn’t the best way to relax.

In 2008, I moved to Italy and began reporting on Vatican and European politics. Over the next seven years I reported and learned, and then one day, the thing we had thought could not happen happened. As I have written elsewhere, while we were distracted, Sauron had got hold of the Ring.

When Bergoglio came out onto the loggia that night, even though we in the piazza had barely been able to catch the name, I knew: that part of the fight was over, and a new one had begun.

This week I got tired of just sitting and watching the Asteroid 2.5 coming at us. But as Gary Cooper once said, I could use a little help. I’m adding a few hand-selected Traditionalist Catholic writers who might be interested in putting in their two cents, their observations, as well as interviews, jokes, memes and anything else that will help us convey the message that Old Narnia is not so dead as old Miraz and his robber baron friends might think.

Whatever happens over the next weeks and months in the Church, no one is going to say that we believers didn’t respond. This blog is a one-off for the duration of the Synod-to-end-the-family. We’ll see what happens together, and maybe do something to respond to the pollyannas and papal positivists too.

This is a ‘blog by and for Catholic Traditionalists and others who just can’t figure out what the hell is going on in Rome. We will follow every step of the Synod and its related happenings, and will try to help readers use their Trad Catholic decoder rings.

What do you do when the war you’ve dedicated your life to fighting is over?

Fight ’em until you can’t.