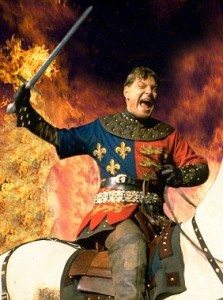 Introducing my little Evil Project for the duration of the Synod.

Later today (I hope) The Remnant will be producing a longish article I wrote explaining in detail (and at length… sorry in advance) why I abruptly gave up news reporting in May this year, literally walking away. In truth, I had gone down to Rome for the March for Life, and the little quiet voice that had been whispering to me for about five years to move on, grew to a roar. I could no longer ignore my misgivings about the value of it. I’m not even really sure what came over me. I had gone to lunch with some friends, and then a couple of us went to the pub for a mojito. Then we went back to my friend’s place where I was staying, and watched a movie.

The next morning, when I woke up, feeling surprisingly refreshed, I simply knew that the time was up. I packed my things, took leave of my friends and got on the train and went home.

I spent most of the summer doing not much more than thinking about it and going for walks. I did a few things for the Remnant, and found a new voice started developing, and a new conviction. We all knew full well that the thing that started today, the Synod, would be a watershed moment in the history of the Catholic Church. We all saw it coming, though even now no one really has any idea of exactly what to expect. For me, however, the one thing remained clear: this was too important to treat as “news”.

But as we drew closer and closer to the day, I found the old urge to report and reveal coming back furiously.

Yesterday, talking to some blogger friends, it was suggested that we set up a war room, a place where traditionally-minded Catholic bloggers, writers and commentators can write and comment about the Synod as it is happening.

And, as things on the internet are generally about three minutes between conception of the idea and realization of the object,

What’s Up With the Synod?

I have recruited some familiar voices who have agreed to help with their examination and analysis of the situation, with a no-holds-barred rule. Names will be revealed shortly (though in some cases, identities will remain obscured.)

I sent around the following note to some of the louder-mouthed among my colleagues:

We’ll run original blog posts as opinion pieces, we’ll steal other people’s stuff from other sites like the pirates we are, and we’ll run original interviews with people on the ground in Rome that no one else will get because we’ll have at least a couple of people on board who will be in situ. I will be inviting people to blog against the highjacking of the Synod … We will give voices to people who would otherwise never be heard

So, beware, beware, oh those of delicate sensibilities, there will possibly be some salty language as well as some unabashed truth-telling, some openly “divisive” posts, some people (I hope) saying things there that aren’t being said anywhere else.

You thought the Mad Rad Trads were the bad kids before? Well the gloves are off today, boys and girls.

I am also opening the commboxes. Get in there, people. Tell us what you really think.

Once more unto the breach!