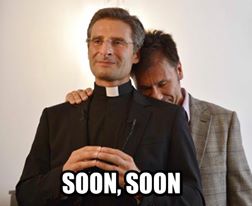 So by now you have likely heard of the “coming out” of a long-employed priest at the CDF. That priest announced he was gay and proud, called on the Church to change Her immutable teaching and called for a presser today.

Outrage!!  All Francis’ Fault!!  Ummm, well not so much Pope Francis’s fault.

Monsignor Krzystof Charamsa has worked at the CDF since 2003.  Err.  That makes this Pole a JPII appointment.  Ah, but JPII – that’s “Saint John Paul II” to you, heathen! – was on his last legs at that point, can’t hold him responsible.  So who was in charge of the CDF at that point?  Ooops.  That was Cardinal Ratzinger, soon to be Pope Benedict XVI.  Wait, are you telling me a whole string of Popes looked the other way at active gay priests in the Vatican?  That is some crazy rad-trad talk right there.

Well, you say, it isn’t like anyone knew who this guy was and what he was doing.

Errr…I mean do you see this guy’s picture with boyfriend?  I mean do  you see it??  I mean they could have appointed George Michael to the CDF and it would be comparable.

So they probably knew about Charasma and they didn’t care.  You don’t say. …

So the Vatican fired him today. No not for being a proud and practicing homosexual priest in contravention of everything Catholic. No no nooo-hoo no, they fired him for protesting and bad timing for his big announcement. BUT, the Vatican wants you to know they still LURVE the gays.

“With regard to the declarations and interview given by Msgr. Krzystof Charamsa it should be observed that, notwithstanding the respect due to the events and personal situations, and reflections on the issue, the decision to make such a pointed statement on the eve of the opening of the Synod appears very serious and irresponsible, since it aims to subject the Synod assembly to undue media pressure. Msgr. Charamsa will certainly be unable to continue to carry out his previous work in the Congregation for the Doctrine of the Faith and the Pontifical universities, while the other aspects of his situation shall remain the competence of his diocesan Ordinary.”

Respect due to what events and personal situations? Do we need the Karma Sutra – WHAM Edition to get the proper picture of what we should be respecting?

But that ain’t what got him fired.  Being a practicing homosexual in contravention of all that is true, good, and holy in the group that is tasked with protecting the faith, that is ok. But putting pressure on the Synod? Unforgivable.

Remember all that talk about a gay cabal in the Vatican a few years ago? Remember When Pope Francis fired the Head of the Swiss guard for pointing out that the “Gay Mafia” was a threat.  They said he was too rigid.  Now I wonder if the opposite was the problem.