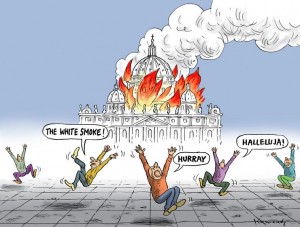 Concern is growing in Rome, where Bishops and Cardinals are gathering for a decisive Synod on the Family beginning on 4 October, that the CEO of the German Church has presided over an emissions fraud scandal set to dominate the agenda in the debates ahead.

It has been revealed that Cardinal Reinhardt Marx, under whose stewardship the German Church has been accused of profiteering from the German pornography industry, as well as simony over the controversial ‘Church tax’, permitted himself and the majority of the German Bishops Conference to be fitted with a device that registered emissions of toxic sulphur (S) when tested behind closed doors.

Now, concern is being voiced that the German Bishops Conference’s cloud of sulphur (S) is set to hang over the decisive second leg of the Synod on the Family, producing emissions that could engulf the debates on the controversial Instrumentum Laboris and seriously damage the Holy See’s public credibility as a sulphur-free zone.

Embroiled in a scandal that indicts the German Bishops Conference as by far the largest and most serious polluters of the Catholic Church, Pope Francis is being advised by nearly a million Catholics to speak up and act now, or face a frightening future for the earth – our common home – of the destruction of human ecology, mass environmental devastation, massive increases in greenhouse gases if such a large gathering of 1st World bishops is allowed to go forward.

Pope Francis was careful, in his address to the UN, to focus on climate change and the need for the governments of nations to act together to cut emissions that could have a detrimental impact on the environment. Beginning his encyclical, Laudato Si, His Holiness stated:

“The Earth, our home, is beginning to look more and more like an immense pile of filth.”

Faithful Catholics petitioning the Pope to give a clear word in defence of marriage and the family maintain that it is now clear that the German Bishops Conference, in the wake of this recent emissions scandal, have to take a large portion of the blame. Audi, a car company now owned by VW have as their advertising motto, Vorsprung durch technik, which is roughly translated as, ‘Progress’ or ‘leap ahead’ ‘through technology’. Obviously, the German Church, by underhand and unscrupulous means, has its own leap ahead in mind and isn’t afraid to use technology to hide its deadly, toxic, sulphurous emissions. Before this scandal brings down the whole Synod, the Pope should surely take action.

There is also the fact that people no longer seem to believe in a happy future; they no longer have blind trust in a better tomorrow based on the present state of the world and our technical abilities. There is a growing awareness that scientific and technological progress cannot be equated with the progress of humanity and history, a growing sense that the way to a better future lies elsewhere. ~ Pope Francis, Laudato Si