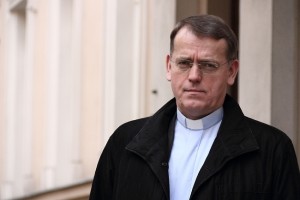 _…and professor at the Pontifical University of John Paul II in Krakow. He is best known for his 2012 paper “With the Pope Against the Homoheresy,” which details a large homosexual network within the Catholic Church that is attempting to undermine the Faith from within._

_Boguslaw Rąpała: Fr. Krzysztof Charamsa has publicly announced that he is gay. And it is you, Reverend Father Professor, that are the target of his sharpest attack. How do you, Father, react to this? _

Fr. Dariusz Oko: After the attack on me, which was launched on Wednesday, I thought that he was gay and it was confirmed. I warned that he could end up like Fr. Węcławski or Fr. Czajkowski, and it also came true…

After the speech, one could see in Fr. Charamsa a disturbed, immature and selfish personality. It is something terrible, that he puts gay sex above God, so to speak.

From Faith in Our Families 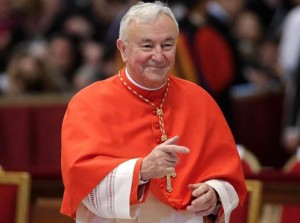 a warning to watch out for the Synod snake-in-the-grass, Englishman Vincent Nichols.

**How Cardinal Vincent Nichols pulled the wool over our eyes just before the 2015 Synod.

** I am reliably informed that the response in many of the diocese to this questionnaire was so low or non existent that those Bishops refrained from submitting anything at all. After all – this was not an official synod questionnaire. I am also reliably informed that at least one Bishop said he wasn’t consulted on content of the finished report before it was released at a press conference by Vincent Nichols.

Did Cardinal Vincent Nichols consult any of the Bishops of England and Wales on the content of this report before its release?

From our Italian friends at La Nuova Bussola Quotidiana

It would be wrong to think that this is a simple episode, the case of Monsignor Krzysztof Charamsa, the official of the Congregation for the Doctrine of the Faith who revealed his homosexuality and introduced his companion: [that it is merely] an extreme case of a frustrated theologian of the Curia who took advantage of the Synod to get rid of the burden of his double life and seek to influence to his advantage the Synod on the family, just started…Too many elements do, however point to this being just the latest episode of a strategy that comes from afar and which aims to use the Synod on the family to make a decisive step forward in the project of the gay lobby in the Church…

And from our new buddies at Denzinger Bergoglio

That is why the Church, with characteristic wisdom conferred by its Divine Spouse, has always decreed that only Catholics who lead a life in accordance with the Faith may be admitted as godparents in Baptism. Therefore, those who publically and obstinately live in grave sin may not be admitted to the special mission of guarding anyone’s faith.