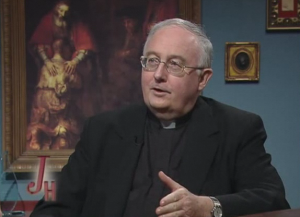 A Synod of Bishops has begun in which the Fathers’ speeches will be limited to 3 minutes and will not be made public; there will be no propositions for the Fathers to vote for or against; and the Committee that will write the “final relatio” has already been named. It includes Cardinal Baldisseri and Archbishop Bruno Forte (main author of the notoriously liberal “interim report” at last year’s Synod), but apparently does not include any prelate known as an outspoken supporter of the traditional doctrine/discipline that prohibits divorced-and-civilly-remarried Catholics from receiving Holy Communion.

Here is an initial report:

If this news is accurate, the Synod is shaping up to be a revolutionary take-over bid, organized in such a way as to impose virtual silence on Fathers who uphold the bimillennial doctrine and discipline reaffirmed by Pope St. John Paul II in Familiaris Consortio, and to turn this three-week gathering into a rubber stamp by which Pope Francis, who has already personally appointed 45 of the Fathers, imposes his will on the Synod under the guise of seeking its advice. Now, this is a Pontiff whose carefully crafted public image is one of humility, ‘listening’, mercy, and open dialogue with all! (Frankly, his style seems more like the iron fist in a velvet glove: it smacks of the populist but authoritarian peronista style of government that the young Jorge Bergoglio observed – and openly admired – in his native Argentina.)

We must pray fervently and make sacrifices that the Holy Spirit will somehow intervene to protect and safeguard Christ’s teaching that remarriage after divorce is adultery. That teaching providentially turned out to be the Gospel reading today (27th Sunday, Year B, Novus Ordo calendar). The Synod Fathers in St Peter’s Basilica assembled under Pope Francis heard that Gospel from St. Mark, ch. 10, proclaimed at the Synod’s opening Mass this morning. Once could scarcely ask for a clearer confirmation from Heaven as to where divine truth lies in this controversy!

If indeed the manipulation of the Synod proceeds as blatantly as this report anticipates it will, one wonders whether we may even see a mass walk-out on the part of orthodox Synod Fathers who would prefer not to have their names used in support of a radical change which they firmly oppose.