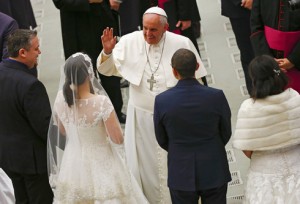 Are you really married? How should I know? Let’s not get bogged down by a lot of disjointed doctrines and little petty rules…Who are you to judge? Eh? No?

The reason why I say that the September 8th Motu Proprio is the de facto abrogation of the Sacrament of Marriage is the fact that it inverts the presumption about ALL marriages from a presumption of validity to a presumption of nullity.

If you don’t believe me, will you believe Professor de Mattei

In Pope Francis’ Motu Proprio this view has been overturned. The interest of the spouses has primacy over that of marriage. It is the document itself that affirms this, by summarizing the fundamental criteria of the reform in these points: the abolition of the double-sentence in conformity, substituted by only one sentence in favor of the enforceability of the annulment; the attribution of monocratic power to the bishop, qualified as sole judge; the introduction of an expedite process [brevior], de facto uncontrollable, with the substantial downsizing of the role of the Roman Rota.

Think about that. In a civil divorce, the divorce declaration says that there was a state of civil marriage that began on X date and ended on Y date.  An annulment says that there was never a marriage. You were never married.  The whole thing was a fiction. God never joined you together, therefore man has put nothing asunder.

Besides sneaking in a list of criteria that can be cited as evidence of nullity – including the universal condition of an undefined “lack of faith” –  and the truly diabolical “etc.” put at the end of the list, which opens the door to absolutely any bullshit excuse anyone would care to come up with, (cf. “mental health” grounds for abortion in US and British law) the Motu Proprio reconfirms the inversion of the presumption by virtue of the appeals process.

And let’s be blunt.  The purpose of the second panel is now to make sure that any “unmerciful, pharisaical lovers of the law” who might weasel their way onto an annulment panel and actually deny an annulment request will be promptly overridden. You know I’m right.

So that brings us to the point of this post, and it is terrifying.  In FrancisNewMercifulChurch, the only way to be assured by the Church that your marriage is, in fact, valid and not presumed null…

…is to file for annulment, have your marriage declared valid by the annulment panel, which will then automatically trigger the “second instance” review by a panel whose purpose and mandate is to override the local panel’s “unmerciful, Pharisaical” finding of validity.

Which means, YOU CAN’T.