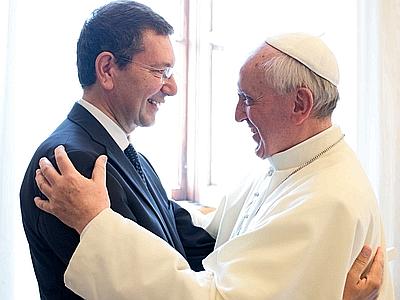 The Mayor of Rome just resigned.

Ignazio Marino was the socialist who replaced the more or less decent Alemanno a couple of years ago. As a crazed social progressive militant expansionist, I’m among those who are not the least bit sorry to see him go.

And neither are the Romans, who have got a bit fed up with being trapped on subway trains that don’t move for an hour while they swelter in 35 degree heat on un-airconditioned cars. I haven’t been down to the Eternal Dumpster for a few months, but even I noticed back in June that things were a great deal more fally-aparty than they usually were. (The fermenting stacks of uncollected garbage bags were at least three feet higher than they were before…)

Of course, the little tiff between Marino and the pope over the latter’s uninvited press junket to Philadelphia last month, more or less went unreported in the MSM, particularly in the Anglosphere. But if I were inclined to pay attention to such things, I’d keep an eye on the Italian press who are no doubt asking whether the Bergoglio regime had any hand in the resignation of the unpopular mayor of Rome.

Also, it will be worth keeping in mind that with this, there’s going to be some bad blood between the Pope and Italy’s leftists, who don’t generally give a damn about the papacy, except to knock it.  But Marino was their boy, and lefties scorned are some pretty forthcoming bitches.

There are lots and lots of secrets in Bergoglio’s Vatican. Secrets that might be of great interest to Italian publications like Il Foglio, the long time opponent of the Italian Radicals, who until last week luuuuurved them some Pope Francis!

[NB: Every time an Italian politician resigns “amid scandal” it is invariably said to be attached to money. In this case, Marino – arguably the most hated man in the country – is being accused of having racked up personal expenses on the taxpayers’ credit cards, a bog-standard excuse in Italian politics. But our friends at Il Foglio are saying that smart readers won’t take this at face value, and are presenting a document that demonstrates it’s about Marino’s “inability to solve problems that have a size different from that of a statement from a paper credit,” namely his inept handling of the pirates who run Rome’s public transport system…

Hey tourists… ever ride the 64 bus down from Termini to St. Peter’s? Did you manage to hold onto your wallet?]