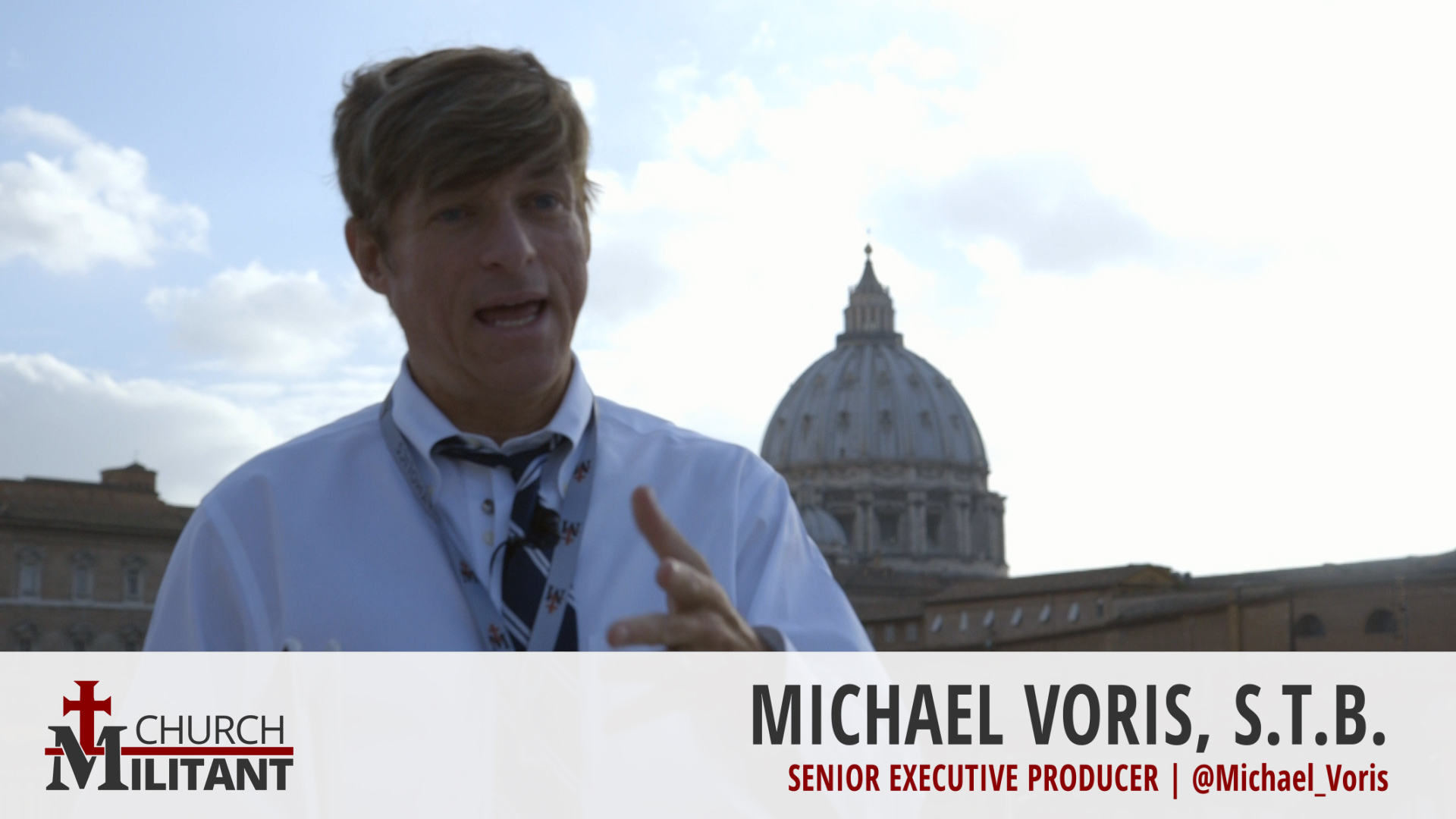 The other thing also is that as the Synod begins to wear on, there’s an awful lot of people right now, faithful Catholics, who are becoming concerned, and many laypeople aren’t really sure what they can do. And they feel right about that because there really isn’t anything they can do on the temporal level. We can certainly pray; as we’ve said on the Vortex every day, be sure to pray your Rosary specifically for the Synod, specifically for the Church.

But outside of that, when we’re dealing with these sorts of questions about what can lay Catholics do, a number of them are starting to get a little panicky about what’s happening. To that end, there’s even one effort, an online petition, encouraging some of the bishops to walk out of the Synod — just do a walk-out. While that certainly may be well intentioned, I’m not sure how that would play out because what happens if the Pope turns around the next day and says, “Get back in here”? They’d look a little silly. But it’s not the question of petitioning to walk out, it’s the point that there are many, many faithful around the world who are starting to get very nervous as they see things unfolding.

I’m going to say it again: I like Mike. I consider him a friend (we have had dinners and drinks whenever we’re on the same continent and he even attended my 45th birthday party, to great hilarity all round) and I like and respect his work. I know he’s done a huge amount of good helping Catholics understand the seriousness of the crisis, and he has done some great work exposing certain prelates, in a Catholic journalistic atmosphere that is almost stifling when it comes to bishops. We don’t agree on every point, (and some of the people he works with can be a little… odd… now and then) but the points of disagreement aren’t at issue for the moment.

But I do want to correct him on a little of the above. First, as I posted the following under his piece:

“Mike, the pope invites bishops to participate. They are free to come or not, or to go. Perhaps a little bit of the papolotry we see so often has crept into this assumption that the pope could or would “order” a bishop to attend a synod once the latter had decided to leave. The idea would be abhorrent, particularly to the liberals who claim to value collegiality and the notion (heretical) that the pope is merely first among equals. They’re supposed to be colleagues, freely participating in a gentlemanly ‘process’ for the good of the Church and the good of souls.

Even from the point of view of PR, it would be disastrous for Francis to do anything like that, since it would severely undermine the careful facade they have all been at such pains to create. The synod, moreover, is nothing like an ecumenical council or conclave, that does have some kind of canonical requirements.

It was all conceived by Paul VI (probably from the Anglicans whom he admired) as a very modern notion of ‘dialogue’ and ‘discussion’ to perform, ultimately, a strictly advisory role. Even in the case of Councils, there have been cases in the past where bishops have deemed the process to be so corrupt or the discussions so dangerous in terms of leading the Church towards heresies that they have left, in protest.

People have asked what good it would do if they did leave. but if nothing else, it would grant them, at least temporarily, a platform in the press to say freely what they want to say. And I’m pretty sure even CNN, the BBC and the NYT would grant them more than the three minutes offered by Baldisseri and his cronies.

Second, I’m afraid he has unfairly characterized the motives of the petition’s authors and sponsors, of whom I am one. The reaction we are expressing in the letter, which can be found here, is not “panic” or “nervousness”. In fact, among all those in the Church objecting to the goings on at the Synod, the self-identified Traditionalists are the least frightened, nervous or worried. And we are far from being “panicked”.

Traditionalists have been expecting precisely this kind of result since the close of Vatican II and all that followed. We are neither nervous, nor panicked. Honestly, we are not even surprised. Weary of being misrepresented… but nothing new under the sun, eh? It is certainly true that many in the conservative Catholic world, perhaps particularly in the US where this phenomenon of “papal positivism” has become so prevalent, nervousness, and even outright fear, seems to be the order of the day. This problem of Catholics being afraid has been one of my main motivators to creating this site, and to taking the bullish and lighthearted tone at What’s Up With the Synod?. We aim to help talk people down from the ledge, give them a laugh, and remind them that a bad pope does not make the Faith untrue.

This petition is part of that effort. It is simply the obvious logical response to a situation that has already got so far away from the purposes of the Church that it has become a public disgrace. My fellow petitioners have been careful to point out that its request that the bishops leave the synod is conditional. The letter says, “if,” the situation deteriorates to the point where participation can no longer be justified we urge them to leave. This action, moreover, has longstanding precedent in the history of the Church.

Personally, I believe that point was reached last year, and confirmed in the intervening year when Pope Francis appointed the same group of men, allowed the Instrumentum Laboris to be published as we have seen it, and then went to the extra trouble of personally inviting Cardinal Danneels and men of his ilk, men who have spent their entire episcopal lives working to destroy the Faith of Christ. Had I been the sole author of the letter, I would not have bothered with the conditional “if”.

This is not a matter of “panicking”. This is a sober evaluation. The Synod is “locked down”. The evidence is clear that the outcome is fixed, and has been fixed since long before they bought their tickets to Rome. A man of integrity does not participate in a “process” that can only end to the destruction of souls.

We have called ourselves the Canon 212 Society, because we are availing ourselves of the means of public communication to address our legitimate concerns, for the good of the Church and for souls, to our lawful superiors in the Faith.

Can. 212 §3 They have the right, indeed at times the duty, in keeping with their knowledge, competence and position, to manifest to the sacred Pastors their views on matters which concern the good of the Church. They have the right also to make their views known to others of Christ’s faithful, but in doing so they must always respect the integrity of faith and morals, show due reverence to the Pastors and take into account both the common good and the dignity of individuals.

Now, Mike appears to disagree with this assessment. He has not signed, and I have just been informed that after my comment, another of the letter’s signatories attempted to post a link to the petition but that it was immediately removed by the site’s administrators. This is also fine. It’s their site. They don’t have to post things they don’t want to post. We don’t have to agree on every method and means. But I do ask my friend Michael Voris to be careful from now on how he characterizes his fellow Catholics who are gravely and soberly responding to the outrages being perpetrated before the eyes of all the world.

I continue to be grateful for the work of Mike and his staff, and send them fraternal greetings, should they stop by WUWTS.