Who’s the pharisee? The ones who want to allow divorce. These are the words of Christ, that divorce was only allowed for the “hardness of heart” of the Jews, “but it was not so from the beginning”. “Mercy” … you keep on using that word…

His Holiness has been bashing those ‘Doctors of the Law’ again.

He’s very hard on the Jews, isn’t he, His Holiness? I do wish that, as well as warning us of “their yeast,” the Pope would remind his hearers that Jesus Christ was rebuking the Jewish leaders of His day, not _the Christians who did and who would come to follow Him who have embraced Jesus’s teachings from the beginning of the Church.

The very Founder of the Catholic Church is Jesus Christ, and yes, He, Jesus Christ, indeed rebuked the Jewish leaders during His Earthly Ministry, but at no time did Our Lord rebuke them for their stubborn insistence that…

a) marriage is between one man and one woman and that no other such union could possibly exist.

b) marriage is a lifelong union of one man and one woman, ordered towards procreation within a sacred union that is indissoluble.

c) homosexual acts are acts of grave depravity, or morally disordered or contrary to nature and such ‘unions’ are gravely sinful.

Here is an irony His Holiness overlooks. On all of a), part of b) and all of c) the Pharisees and Jesus Christ will, ironically, have been in complete agreement. Pope Francis, however, is not addressing Jews but Christians and must know that his words today do not exist in a vacuum but they are timed to perfection within the veritable cauldron of the Synod on the Family.

Unfortunately, His Holiness never mentions that far from rebuking the Jews of His day for observing the union of marriage, rather Our Lord rebuked them for not doing so and for claiming to uphold the Law of God when, in fact, they did not. One way in which many did not was by not ‘going the whole way’ in terms of the covenant that is marriage.

‘And there came to him the Pharisees tempting him, and saying: Is it lawful for a man to put away his wife for every cause?’

And then came the answer. We know the answer. They did not like it. They were told their “hardness of heart” led them to divorce and to permit it, even to extol it.

True it is that Jesus Christ condemned them for their lack of mercy, their self-righteousness and their lack of compassion but not for their religious, if stingy, beliefs on the basics of human marriage. Nor did he condemn what we can assume were their natural feelings on homosexuality, because, remember, the Second Person of the Trinity, with the First and the Third, destroyed Sodom and Gomorrah with fire in the Eternal

He Who is the One True God. 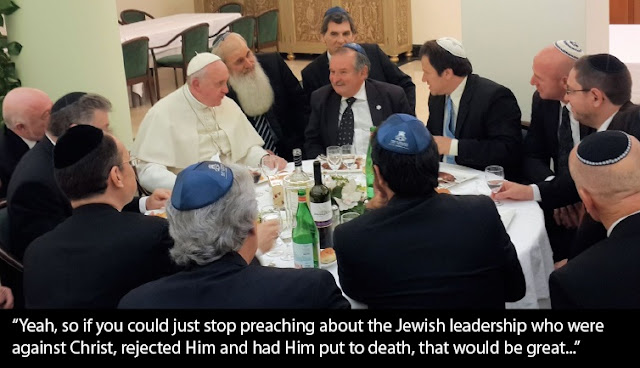 Not only did they not uphold the moral law in its beauty and truth, but they obsessed, not even over God’s commandments, but rather over man-made laws, or, in Jesus’s words, ‘human traditions’ that served only to hinder their fidelity to God, their love of God and love of neighbour. They didn’t obsess over Jesus’s commandments or His Teachings. They didn’t like much His marital teaching. Even the Apostles asked Him again.

Those Pharisees, those ‘Doctors of the Law’ needed a Saviour, but they did not believe they needed Jesus, while here was the Saviour standing before them. They called themselves teachers, yet here was the Divine Teacher Himself standing before them and they, Jewish leaders, not Christian Popes and Bishops, rejected Him and had Him crucified. That might not sound ‘PC’ but that is what the Gospels record.

And more than this, the Pharisees were angered, yes really very offended indeed, by Our Lord’s insistence that “what God has joined together, let no man put asunder,” presumably because among them they themselves had abused the law of Moses and had put away their first wives and remarried according to their own, perhaps not-so-holy desires.

Jesus Christ insisted that Moses permitted divorce only because of their ‘hardness of heart’.

Ouch! Now someone greater than Moses was there, standing before them: Jesus Christ, the Son of Man and the Son of God and He was to make “all things new.”

St John the Baptist: “I defended the sanctity of marriage and all I got was my head cut off…”

Jesus Christ commended, publicly, St John the Baptist who was martyred for upholding God’s vision of marriage, over man’s debasement of it and for condemning the sins of Herod.

As for homosexuality, it is notable that Jesus Christ spoke little of it because if adultery was shameful during His Earthly Ministry, just take that and multiply it by a thousand for today’s enduring cause for the promotion and defence of the right to sodomy.

Of course, when it comes to interpreting His Holiness’s homilies nowadays the key is simple: for “Pharisees and Scribes/Doctors of the Law” just insert “faithful Catholics” or “followers of Christ”. After all, it is Kasper and his followers who are bending to “human traditions,” not faithful Catholics. Jesus Christ’s relationship with the Pharisees is not as simplistic as His Holiness would try to convince us that it was.

Jesus did not condemn them for loving the Law of God, but, far from it, for not loving it or rather He Who gave it. He said to them: ‘But I know you, that you have not the love of God in you.’

For over two years now, we have heard this strange message, with little to no teaching on the dignity and sanctity of marriage and the family, which has become really the message of the Synod, from Pope Francis – and it is one exemplified by his own – for they are truly his own – “law-destroying laws” promulgated in his Motu Proprio on marriage annulments.

Perhaps Francis’ reasoning could be summed up conveniently, thus… Collegiality? No need for a Synod on the Climate, for Peter has spoken with authority…

But here’s the uncomfortable (for modern people) reality:

Whatever Francis says or does during and after this Synod, the Pope is not God. Please allow me to say it again: The pope is not God. He cannot, therefore, introduce any new teaching.

Jesus Christ and His Teachings cannot be improved upon. Either the Church gathers with Jesus Christ as its Lord and with those who bravely re-iterate His teachings, or it is shattered and scattered into anarchy and chaos.

Praise be to Our Lord Jesus Christ. May He make our faith in Him and His Word as solid as a rock.