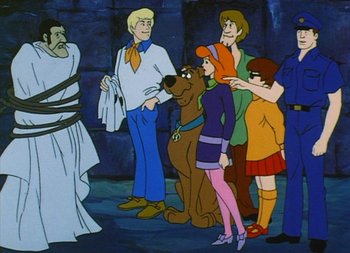 Yeah, and I’d have got away with it too if I’d been the pope… Oh wait…

Do you know that movie cliché wherein after chasing the bad guys for half the movie, the team finally has him cornered only to have one of their own take their pointed gun and slowly turn it on our hero, dashing hopes that this stupid movie would be mercifully short? Even in the best-made movies that employ this story mechanism, it should have been obvious to anyone paying attention that the mole’s loyalties lay elsewhere, that perhaps he is even the story’s true antagonist.

This movie conceit is called the “big reveal.”

The problem is that most movie-makers are hacks and they give away the identity of the true villain when they think they are hiding it, a little too much information here or there that lets you know something is up.

If you love movies and moviemaking the way I do, you become quite adept at figuring out the little signals that show you the identity of the true villain. It can be quite frustrating as, many times, it ruins the story for you as your ability to suspend disbelief erodes under the force of the obvious manipulations of hack directors and writers.

At the beginning of the Pope Francis story, I was willing to suspend disbelief. I gave him copious benefit of the doubt that, like all popes should, he would try and protect the Church and her beliefs from a world that hates them. But over time, the signs just became too obvious. His speeches, his interviews, his phone calls, Evangelii Gaudium, Laudato Si, and in particular the Synod and all its appointments and machinations made abundantly clear to anyone paying attention the Pope’s true character and intentions.

For some time I have felt like a movie-goer who figured out the whole plot ten minutes into the show and is now just eating popcorn while waiting for the big reveal, so everyone else can catch up.

But it seems that the big reveal has happened, the big Scooby-Doo moment wherein the mask is pulled off and we see who is really behind it all.

In a series of speeches, at the beginning of the Synod, at its end, and then again yesterday, along with his recent Scalfari interview, his mask seems to be off and he is telling us exactly what he plans to do.  In other words, he is revealed as the villain in the story, and he is now monologuing, telling us his villainous plans, because that is what they do.

From his opening speech at the Synod.**

“Finally, the synodal process culminates in listening to the Bishop of Rome, called upon to speak authoritatively as ‘Shepherd and Teacher of all Christians’: not on the basis of his personal beliefs, but as the supreme witness of the Faith of the whole Church, the guarantor of the Church’s conformity with and obedience to the will of God, to the Gospel of Christ and the Tradition of the Church.”

Closing speech of the Synod.**

“It [the Synod] was also about laying closed hearts, which bare the closed hearts which frequently hide even behind the Church’s teachings or good intentions, in order to sit in the chair of Moses and judge, sometimes with superiority and superficiality, difficult cases and wounded families… And – apart from dogmatic questions clearly defined by the Church’s Magisterium – we have also seen that what seems normal for a bishop on one continent, is considered strange and almost scandalous – almost! – for a bishop from another; what is considered a violation of a right in one society is an evident and inviolable rule in another; what for some is freedom of conscience is for others simply confusion.

“Cultures are in fact quite diverse, and every general principle – as I said, dogmatic questions clearly defined by the Church’s magisterium – every general principle needs to be inculturated, if it is to be respected and applied. The 1985 Synod, which celebrated the twentieth anniversary of the conclusion of the Second Vatican Council, spoke of inculturation as “the intimate transformation of authentic cultural values through their integration in Christianity, and the taking root of Christianity in the various human cultures”. Inculturation does not weaken true values, but demonstrates their true strength and authenticity, since they adapt without changing; indeed they quietly and gradually transform the different cultures.”

Rorate translation of the Scalfari interview.**

The diverse opinion of the bishops is part of this modernity of the Church and of the diverse societies in which she operated, but the goal is the same, and for that which regards the admission of the divorced to the Sacraments, [it] confirms that this principle has been accepted by the Synod. This is bottom line result, the de facto appraisals are entrusted to the confessors, but at the end of faster or slower paths, all the divorced who ask will be admitted.”

And just this week we have his November 10th speech to the national conference of the Italian church.

“Before the problems of the church it is not useful to search for solutions in conservatism or fundamentalism, in the restoration of obsolete conduct and forms that no longer have the capacity of being significant culturally,” the pontiff said at one point during his remarks.

“Christian doctrine is not a closed system incapable of generating questions, doubts, interrogatives – but is alive, knows being unsettled, enlivened,” said the pope. “It has a face that is not rigid, it has a body that moves and grows, it has a soft flesh: it is called Jesus Christ.”

“The reform of the church then, and the church is semper reformanda… does not end in the umpteenth plan to change structures,” he continued. “It means instead grafting yourself to and rooting yourself in Christ, leaving yourself to be guided by the Spirit – so that all will be possible with genius and creativity.”

The Pope has revealed himself and is telling us what he is going to do.** It is impossible not to see him for who he is and what he intends to do. Nobody has the luxury of feigning surprise at what comes next. The Pope is the hackneyed director and writer of his own story and he has given it all away.

In the movies, the mechanism of the “big reveal” serves two purposes. It serves the obvious purpose of letting the audience clearly know which side this key character is on. It also serves to let the story’s protagonist know that his cause is futile. He cannot possibly win.

It seems we might be at the point in this papacy where the Pope feels it necessary for everyone to know where he stands and to let the opposition know that they cannot possibly prevail.

There is one more common movie conceit I hope to see. Sometimes, after the big reveal, that character repents of his choices and chooses the side of good.

We must always and continuously pray for the Pope as we must also oppose him in his plans.

May God help His Church.