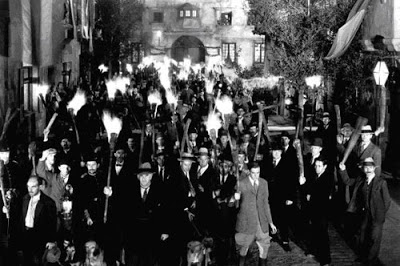 “_At some point, someone is going to have to anathematize Bergoglio in order to offer any credible and meaningful counter to his satanic, murderous utterances. It should be done as soon as possible, which means while he is still alive, which means deposition as well. For the love of God, and for the sake of every human soul now and forever capable of being scandalized into eternal damnation by Bergoglio’s diabolical lies, let an Imperfect Ecumenical Council be called by those bishops remaining who still hold the Catholic faith, and love God above all else._”

Pretty sure that the most recent back-breaking straw was the whole Bonino business. Or might have been that contraception is A-OK in “exceptional” circs. Hard to know, really.

Whatever set it off, it’s pretty difficult to argue against the basic thesis, but I foresee one insurmountable difficulty: it requires bishops willing to step out from behind their battlements and be the guy. No one wants to be the guy.

Now, I realize that Ann was writing in some sense “for the record,” meaning that she stepped in and said what needs to be said that other people are mostly too reticent to say. And the signal it sends to the men in charge of the Church is always valuable:

“We are the last Catholics in the Church who actually still hold the whole of the Faith, and this is where we are. We’re way past, “translations” or any of the rest of the usual, tedious roster of excuses. We have long since lost the kind of reverence for the papacy or the hierarchy that Catholics traditionally held (unless they’re Romans, who traditionally just formed mobs and stampeded whenever a Conclave gave them someone they didn’t like). We’re long, long, LOOOOOOng past having the slightest trust in any of you. If you wanted “respect” from believing Catholics, you should probably have done more to defend the Faith in the last 50 years.

“At this stage, we’re pretty much ready just to lynch-mob your asses.”

But all that being understood, I can’t really see anyone, including Ann, having any realistic expectation that any of those guys, even the “good” ones, will actually step up and do the needful thing.

And if there were even the slightest possibility that this would happen, I have only a few questions:

1) Since we have to have someone as pope, once this deed is accomplished, who’s going to be the new one? I just had a friend on the phone, who said, “This guy is such a flaming narcissist it’s hard to even imagine someone worse…” Ohhh? I said… Is it? How about someone who is in exactly the same frame of mind as Bergoglio, with all his priorities, but who’s way, way smarter? How about someone who doesn’t make a palpable ass of himself in public every time he opens his mouth, who remembers from one day to the next what he has already said and can keep his story straight? Who is, in short, plausible? Now, how about that guy, only 20 years younger than Bergoglio, so we can be sure to have him for a long, long time? Worried now?

2) Do we really think that the people who have committed themselves to the destruction of the Catholic religion over the last 250 years (at least) are just going to quit? How long have this cadre been working on their long term goals?

3) Will it solve the problem? In other words, is Francis a cause or a symptom?

Meanwhile, y’all can go ahead and write a letter to your bishop. Hell, start a whole letter-writing campaign to your entire episcopal conference if you’ve got some time on your hands and there’s nothing much on TV.

Here, I’ll help. This is where you can get the postal address of every bishop in the world. Catholic Hierarchy.org

I’ll be here watching this porcupine with the hiccups eating a banana.

Y’all let me know how it goes.