How many hundreds, Eminence? 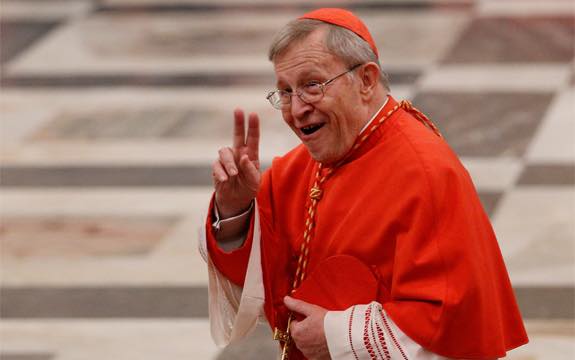 You guys read all of … ummm… what was that thing called again? Evangelii Gaudium, right?… yeah, I bet we all read every single world, right? Because Pope Francis is such a joy to read.

94. This worldliness can be fuelled in two deeply interrelated ways. One is the attraction of gnosticism, a purely subjective faith whose only interest is a certain experience or a set of ideas and bits of information which are meant to console and enlighten, but which ultimately keep one imprisoned in his or her own thoughts and feelings. The other is the self-absorbed promethean neopelagianism of those who ultimately trust only in their own powers and feel superior to others because they observe certain rules or remain intransigently faithful to a particular Catholic style from the past. A supposed soundness of doctrine or discipline leads instead to a narcissistic and authoritarian elitism, whereby instead of evangelizing, one analyzes and classifies others, and instead of opening the door to grace, one exhausts his or her energies in inspecting and verifying. In neither case is one really concerned about Jesus Christ or others. These are manifestations of an anthropocentric immanentism. It is impossible to think that a genuine evangelizing thrust could emerge from these adulterated forms of Christianity.

95. This insidious worldliness is evident in a number of attitudes which appear opposed, yet all have the same pretence of “taking over the space of the Church”. In some people we see an ostentatious preoccupation for the liturgy, for doctrine and for the Church’s prestige, but without any concern that the Gospel have a real impact on God’s faithful people and the concrete needs of the present time. In this way, the life of the Church turns into a museum piece or something which is the property of a select few. In others, this spiritual worldliness lurks behind a fascination with social and political gain, or pride in their ability to manage practical affairs, or an obsession with programmes of self-help and self-realization. It can also translate into a concern to be seen, into a social life full of appearances, meetings, dinners and receptions. It can also lead to a business mentality, caught up with management, statistics, plans and evaluations whose principal beneficiary is not God’s people but the Church as an institution. The mark of Christ, incarnate, crucified and risen, is not present; closed and elite groups are formed, and no effort is made to go forth and seek out those who are distant or the immense multitudes who thirst for Christ. Evangelical fervour is replaced by the empty pleasure of complacency and self-indulgence.

Hooooo-BOY! Just imagine 200 pages of that!

Are you imagining it?