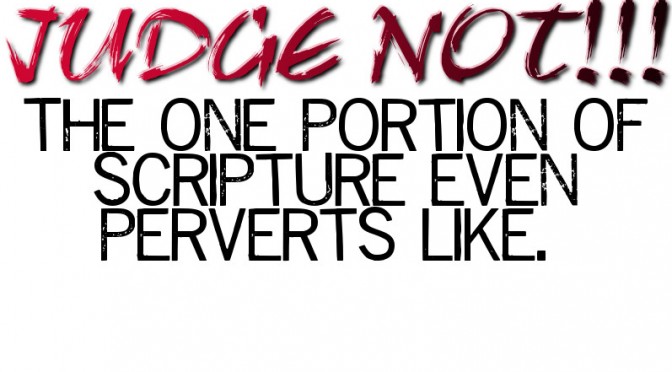 In his Exhortation of Desolation, Francis, unbelievably, trots out the extraordinary assertion that “the Gospel itself tells us not to judge or condemn.”

Catholics, who have spent the last three years putting up with his apparently inexhaustible supply of insults, fall off their chairs laughing in unison.

(Siesmologists around the world dive under their desks.)

The comment comes in the context of how we should be nicer to people who are unable to live up to the “ideal of the Gospel and the Church’s teaching,” and “help them to treat the weak with compassion, avoiding aggravation or unduly harsh or hasty judgements.” [Scroll to para. 308]

But what did we have in the Gospel reading at Mass this weekend?

“It is expedient for you that I go away: for if I go not away, the Comforter will not come unto you; but if I depart, I will send him unto you. And when he is come, he will reprove the world of sin, and of righteousness, and of judgment: Of sin, because they believe not on me; Of righteousness, because I go to my Father, and ye see me no more; Of judgment, because the prince of this world is judged.”

I did a thing for the Remnant’s upcoming (today) print edition double-feature explaining again why I have been calling the pope out on Twitter and here for his blasphemies.

__As Francis’ assertions become increasingly alarming, particularly in his exhortation Amoris Laetitia, an underlying, though previously veiled, theme has emerged that has now gone past mere implication. Francis’ assertions add up to the proposal that the Church, founded by Jesus Christ for the salvation of all men, was just wrong. We have been doing it wrong. 2000 years of saints and blesseds, 2000 years of Christian civilization, and it was all wrong.

We must now, Francis claims, abandon all that. It was too “rigorist,” too “harsh;” it was unmerciful and hard-hearted. Indeed, the Christ we thought we knew was not the real Christ. We need a new Christ, for the new Church to be initiated by this pontificate that will be more suitable, more acceptable for the new world.

We have in this pope not only a man who appears ignorant of, or who even dislikes the traditional teaching of the Catholic religion, but one who malignantly habitually invokes the third Person of the Holy Trinity to propose that Catholics abandon both the Church and her divine Founder. He continually calls, now quite openly, for a new “church” that will abandon the “rigorous” requirements that, he claims, drive people away.

This, ladies and gents, is blasphemy, in the purest sense. It is hatred and disparagement of Christ and the Church, the claim that He is unjust and that His Church was in error for holding fast to His teachings. I didn’t want to believe it myself, but the evidence is before us nearly every day.

_But perhaps most horrifying of all, Francis is proposing that the Jesus Christ, Second Person of the Holy Trinity, who can neither deceive nor be deceived, who is the same yesterday, today and tomorrow, has changed His divine mind and is now opposing that which He laid down for us for all time…

The universe that could have such a “god” as its creator is a Lovecraftian horror of utter chaos and nihilistic meaninglessness in which “god,” if there is such a thing, cares nothing for the final good of man. It is a universe, to paraphrase C.S. Lewis, in which it is as though the sun rose and it were a black sun, or as if we drank water and it were dry water.

You can get it online by subscribing to the Remnant’s e-edition.

And you can read more about the technical definition of blasphemy here.