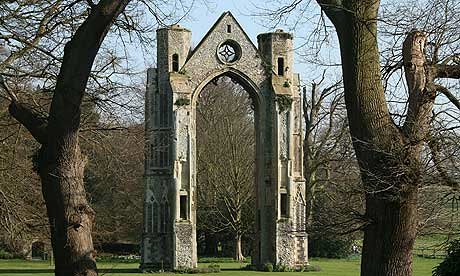 The world will not give you what you want.

Stop trying to please it.

_The Sea of Faith

Was once, too, at the full, and round earth’s shore

Lay like the folds of a bright girdle furled.

But now I only hear

Retreating, to the breath

Of the night-wind, down the vast edges drear

And naked shingles of the world.

Ah, love, let us be true

To one another! for the world, which seems

To lie before us like a land of dreams,

So various, so beautiful, so new,

Hath really neither joy, nor love, nor light,

Nor certitude, nor peace, nor help for pain;

And we are here as on a darkling plain

Swept with confused alarms of struggle and flight,

Where ignorant armies clash by night.

This piece by Jonathan van Maren tells of England’s loss of faith. But that loss has been coming on, in full view, for nearly five centuries. I am reading an interesting book a friend gave me for my birthday, the Records of Romsey Abbey, the long story told from original sources, of the life of a Benedictine house near Salisbury – where my mother was born – from its ancient founding in the time of Alfred the Great, to its dissolution by the dissolute king and it has gripped me again, that almost choking sadness. The sense of loss so great that I couldn’t stand to live there in the mother country. Now when I go to visit, the godlessness, the hatred of God in fact, is like a slap in the face.

England didn’t lose the Faith. She had it ripped from her. And she has been naked and afraid in the dark ever since.

The grass to grow

Where the walls of Walsingham

So stately did show.

Such were the worth of Walsingham

While she did stand,

Such are the wracks as now do show

Of that Holy Land.

Level, level, with the ground

The towers do lie,

Which, with their golden glittering tops,

Pierced once to the sky.

Where were gates are no gates now,

Where the press of peers did pass

While her fame was blown.

Owls do scrike where the sweetest hymns

Toads and serpents hold their dens

Where the palmers did throng.

Whose days are nights,

Sin is where Our Lady sat,

Heaven is turned to hell,

Satan sits where Our Lord did sway —

attributed to the Earl of Arundel, Philip Howard.