I’ve been saying it for some time. This is their time to get rid of us. There are so few Catholics left who believe what the Church teaches that it shouldn’t really be that hard for them.

But make no mistake. They understand exactly the same thing that we do. The sides have lined up. There is no pretense at all now of trying to convert anyone. They know full well that the work they have done for the last 50 years in the Church to undermine and misinform, to dupe and deceive and lull to sleep as many as they can is now complete. All the ones who can be corrupted have been corrupted. The ones that are left – us – are the ones they know they can’t get to. The only thing left to do now, therefore, is get rid of us.

Some of them are now admitting it openly.

This John Paul Shimek character is someone who has previously touted himself as a “conservative” and boasts that he is a major figure in advising bishops and cardinals in the US, as a writer on Catholic issues he has been published by some of the leading Catholic “conservative” magazines. Lately his homophilia has come to the fore, perhaps because he feels now that there is sufficient space for such ideas under the current regime.

Recently, our friend Steve Skojec made public a screen cap of a conversation – one of many… Steve actually seems to like talking to such people – in which Mr. Shimek, being somewhat less clever than he thinks himself, came right out and said it. 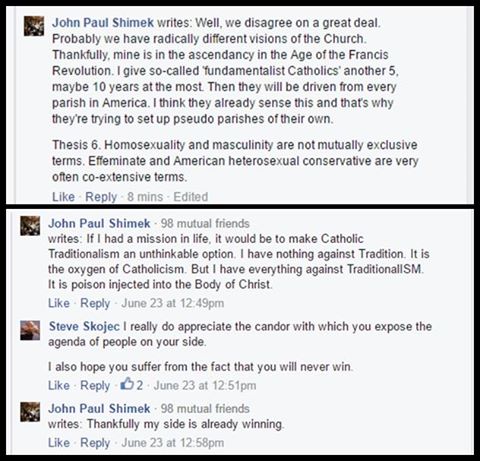 Novusordoist “conservatism” is entirely and completely a fraud, and the work they are currently engaged in is to “drive” people like you and me “out of the Church.” They don’t really seem to have any notion of the supernatural realities of the Faith or the Church. For them perhaps it is some kind of club that they would like, for some reason, to have to themselves without difficult people like us around. The fact that these people have already clearly left the One Holy Catholic and Apostolic Church, the supernatural community of the Faith founded by Christ for the salvation of the world, seems never to have crossed their minds. They are incapable of anything other than purely naturalistic, materialistic thought. To them the Church is merely an earthly collection of like-minded people.

Frankly, I can’t really understand what the appeal of a de-sacralized Catholicism could be. I have trouble figuring out what they imagine the Church is or what it is for, or what “salvation” means to them. I’m not sure there is much to be gained in putting the effort into figuring it out. I’ve had conversations with Shimek myself and the guy can’t string two coherent thoughts together. Figuring out what he “means” is like trying to figure out the meaning of the “word salad,” the disconnected blithering of a schizophrenic. The very disconnectedness of their thought, apparently, is taken among them as a sign of “profound spirituality.” The fact that nothing either Shimek or Francis says makes any sense is, in novusordoland, considered a “feature, not a bug” as our computer buddies like to say.

But it’s funny isn’t it? They tell us all the time how “hate-filled” we are. But do we want to see them “driven out of the Church”? What does that even mean? Are they saying that they want to see us in hell for all eternity? (Do they even believe in such things?)

And yet, what we want for them is their salvation and eternal happiness.

Nope, no charity under here.