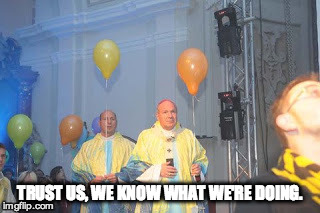 One of them, told by an idiot, full of blasphemy and heresy, signifying nothing…

**“The Pope goes beyond the categories

of regular and irregular couples

They really love this “goes beyond” stuff, don’t they? Remember what happened to Nietzsche when he tried to go “beyond good and evil”? Yeah; went nuts and died raving in an insane asylum. It’s what happens when you try to encompass the nihilistic anti-rational principle. Things and their opposites aren’t the same. Mkay?

Anyway, here’s Cardinal Aye-Luv-Ter-Ghaies Schönborn at his anti-rational, neomodernist best, letting it all hang out for the whole world to see…

Corriere comments by way of introduction:

Francis has repeatedly said that Schönborn (“he is a great theologian; read his presentation [on AL]”) had grasped the significance of the Exhortation laetitia Amoris, written after the two Synods on the family. In the interview he shows the great themes of the text and, among other things, the cardinal said, the avoidance of doubt (and resistance).

The Exhortation is an act of the magisterium of the Pope, not the expression of mere opinions as his critics would have it. It clarifies that those who live an “ojective” state of sin (as divorced and remarried) are not always “subjectively” guilty; and therefore “it is possible that in certain cases it can receive the help of the sacraments,” even the Eucharist.

Q: Some have spoken of “Amoris laetitia” as a child document, almost a personal opinion of the Pontiff without full magisterial value. What value does this exhortation? It is an act of the Magisterium?

A: “Clearly this is an act of the Magisterium! It is an apostolic exhortation. It is clear here that the Pope exercises his role as pastor, teacher and doctor of the faith,

…after having benefited from the consultation of the two Synods… 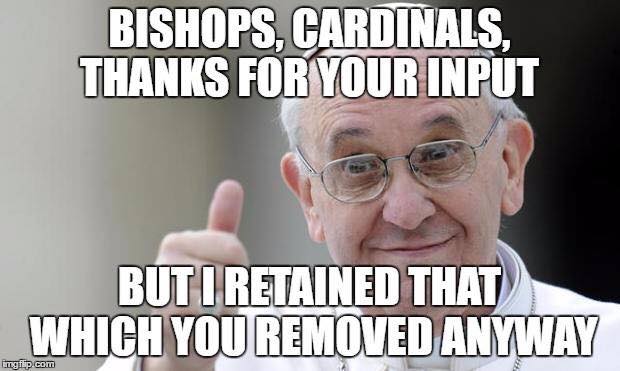 I think, no doubt, we should speak of a high quality papal document, an authentic lesson of sacred doctrine , which brings us back to the current of God’s Word. Amoris laetitia is an act of the magisterium […even those bits that contradict the other bits? Except on Tuesdays?…] which makes the current over time this teaching of the Church. As we read the Council of Nicaea in the light of the Council of Constantinople, and Vatican I, in the light of Vatican II, so now we have to read the previous interventions of the Magisterium on the family in the light of its contribution […Familiaris Con-what-io?… how’zzat?… You got my trick ear there… ooh! cookies!…]. We brought in a vital way to distinguish the principles of the doctrine of continuity in discontinuity of perspectives or historically conditioned expressions. It is the proper function of the living magisterium: authentically interpreting the word of God, written or handed down.”

Q: I’m intrigued by the fact that the Pope speaks of irregular situations putting the word in quotation marks and by preceding the expression “so-called.” In your opinion, this has a special meaning?

A: “The relevant fact of this document is that it exceeds [“esso supera” … “surpasses” … “goes past”] the categories of “regular “and” irregular.” There are, simplistically, first marriages and families that work, which are fine, while the others are not good. Francis speaks of this reality that affects everyone: we are ‘viatores,’ we are journeying. We are all subject to sin and we all need mercy. […] Francis does not deny that there are regular or irregular situations, but it goes beyond this perspective to put into practice the Gospel: who among you has never sinned cast the first stone.” 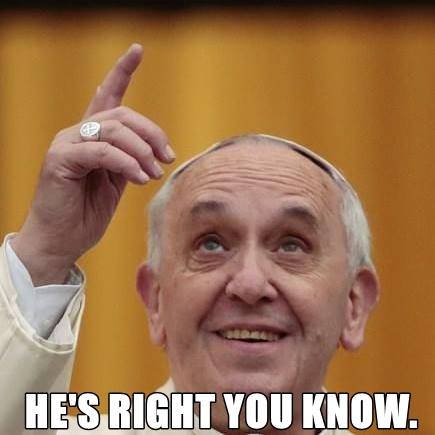 Anyway, that’s enough of that poison. If you really like reading soul-killing, anti-rational, demonically inspired gobbeldygook you can go read the rest. It’s in Italian, but Google can help. Me, it just makes me want to throw rocks at the papal balcony.

But here’s a little point to take home and chew: some are saying <coughcardinalburkecough> that it “doesn’t matter” what the Exhortation of Desolation says. It’s all just a matter of this opinion or that, until Francis says the Magic Bippity-boppity-boo Pope-words to make it infallible. But for all that, it’s funny how much the secular press has grasped just how laser-point relevant the whole business is. It’s almost as if the Church’s enemies know more about what’s really going on than our putative defenders.

(Oh, and another thing, Holiness… he was never “secretary of the CDF.” Once is a mistake. Twice is a lie. We’ve all got Google… you know that, right Holiness? Every single person in the world outside the Vatican is now capable of fact-checking every single thing you say … usually within 60 seconds of your having said it, and then publishing it for everyone else to read. I know this is hard for you old guys to understand. Just think of it as magic.)

Anyway, someone might want to arrange a cage match between Cardinal “Never-met-a-logical-contradiction-I-didn’t-love” Schönborn and Archbishop Charles “who-me-anti-papal?” Chaput.

The Archbishop of Philly just this week has told his flock who can and can’t and why.

“Undertaking to live as brother and sister is necessary for the divorced and civilly remarried to receive reconciliation in the Sacrament of Penance, which could then open the way to the Eucharist.”

“This is a hard teaching for many, but anything less misleads people about the nature of the Eucharist and the Church,” the document says.

Because in NuChurch, we let our yes be no and our no, yes; our up be down and our down, up, and we just don’t talk about it too much, yaknowwhutImean?

It’ll aaaaaall be over soon…