Well, that was a new experience

It was the noise. I’ve never in my life heard such a horrifying noise. It was so loud, I thought for a moment that my worst child-of-the-Cold War nightmares had come true, but then I realized there had been no flash. It took me another second – while this appalling roar was still getting louder – to realize it was an earthquake, and probably a really big one. I curled up into a ball with my arms over my head and prayed the roof didn’t collapse on me. I thought of the kitties, and then the monks and then my good friend who also lives in the centro. But there was nothing to do but hope I didn’t die.

The first really big shock was over in a minute, (a very, very, very long minute) and I got up, shaking, and went around the house. Checked on the kitties (who sleep in their kitty-room at night) and they were fine. Pippy blinked sleepily at me, obviously wondering why I was turning on the lights at that hour. (At the first aftershock, while the house waved back and forth like a ship in the wind, he stuck out all his fur and dove under the covers.)

No damage visible in the house. A few things fell off the shelves and the pictures were askew. The power was still on and a glance out the window told me it was still going throughout the valley.

I started calling people, but realized at that moment that my phone was out of credit. Couldn’t even send a text.

I decided to get dressed and go down to town to see if there was anything I could do. To see if everyone was OK. And maybe pray with the monks. While I was dressing we had our first big aftershock. All I could do was wait it out, while the house rocked back and forth and the roar, like the world collapsing, grew and then faded.

By the time I was ready at quarter to four, I heard cars and motorini already heading down the hill to town. I got on my bike at ten to four and everyone was up along my street. People were in their gardens and congregated in clutches along the roads, frightened faces shining white in the street lights.

There was already a traffic jam to get into the city at the Porta Romana, and that was where I saw the first damage. The stone of the arch was sound, but a lot of the plaster was on the ground in pieces. The plaster and stucco of many of the buildings showed large cracks, and a few facing stones were in the street. I’ve since learned that sections of the wall on the north side have come down and are in the road. There is a large crack down one of the medieval defensive towers. The facades of some of the churches are cracked. I’ll have a walk around town later to see for myself.

But generally, the older the house, the better it held up. My friend’s house in town, where I’m using her wifi, was built originally as a monastery in the 15th century and there’s not a single crack anywhere, and only a few broken glasses on the floor. Houses built in the 20th and 21st centuries range from visibly damaged to uninhabitable.

The piazza was full of a couple hundred people, milling about, some with blankets around their shoulders, many with their dogs. Some older people were in wheel chairs and some of the hotel guests had their luggage piled up around them.

The monks were all there, all present and accounted for. The joke was immediately made, “So, this is what it takes to get Hilary up in time for Matins!” Hilarious, guys. 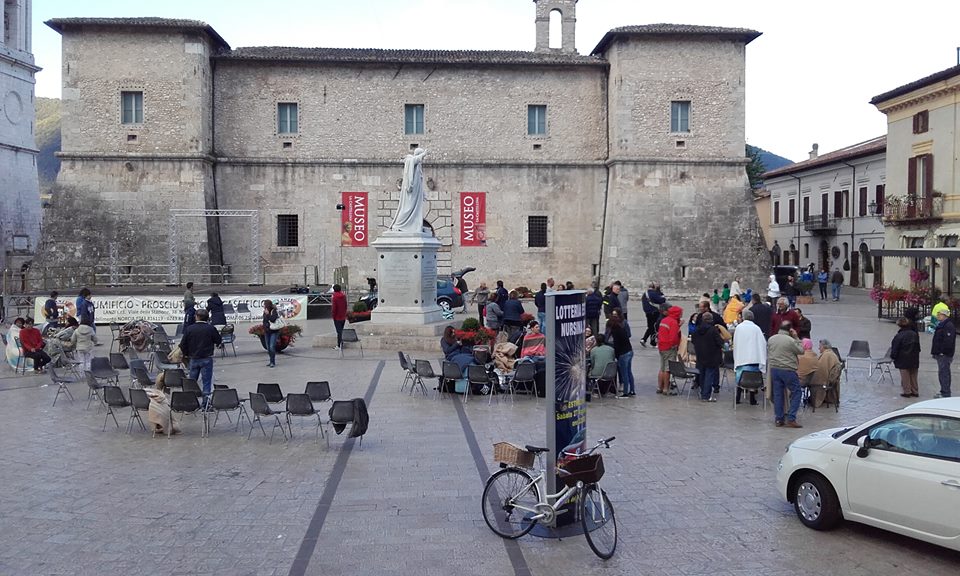 About seven am. Most of the crowd dispersed, monks (and me) singing Laudes in the crypt. Photo: Michele Sanvico, via Facebook.

I parked my bike in the piazza this morning, and not in its usual spot between the wall of the Basilica and the monks’ shop. Didn’t want any rocks to fall on it.

Fr. Cassian told me that no one was hurt, but the monastery was damaged and there was “quite a lot of damage in the church.” 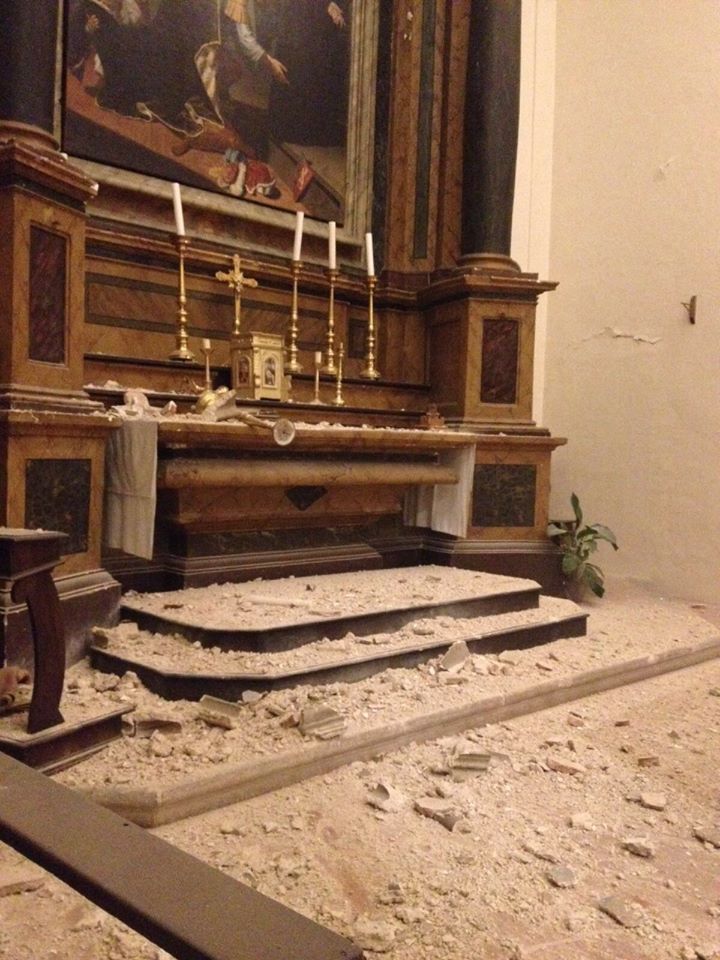 Above the painting, the whole section of decorative plaster, including an icon, is what’s all over the floor. (Not my photo. Taken by one of the monastery guests. When I find out, I’ll credit.)

Later, we ventured inside and saw that the Baroque-era plaster work over the St. Benedict transept altar was on the floor. (Never liked it much anyway.) 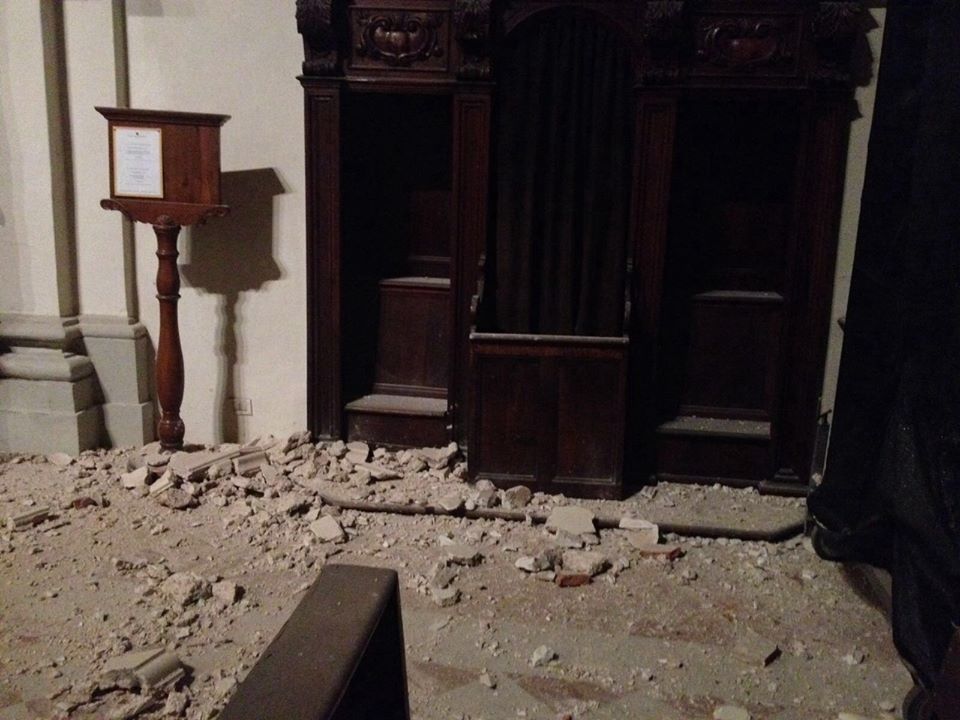 In fact, quite a lot of the ceiling plaster is on the floor too. Our ceiling is undecorated, so no art was destroyed, and all the paintings on canvas seem fine, but there’s going to be a job of work to tidy up and I’m sure we’ve lost a lot of the decorations. We’re just hoping that the restoration work on the side altars is OK. The scaffolding covering three of them is still up and looks solid.

The gathering in the piazza had an odd air. No one was quite sure if there would be another big quake, and we milled around, chatting and making weak jokes. I was sitting on the steps of the town hall when the roar came again. People were screaming with fright as the piazza, normally very reliable and solid stone, suddenly turned into a surface more like a trampoline. We clustered in the centre of the piazza as we watched the cross and the statues on the facade of the Basilica, looming far above our heads, wave back and forth like flags.

The aftershocks have continued all day. I was just now over at a friend’s place helping to sweep up broken glass, when another one came. You freeze as the rumble starts, and consider your options. Dive under the big oak dining table? Seems like a pretty good idea…

The five am tremor was the last of the big ones, though (so far) and we started to get reports from the internet on iPhones about other towns.

The towns of Amatrice and Accumoli were the worst, with most of these towns flattened, people dead and missing, shouts heard from under piles of rubble. The latest count from Amatrice (at eleven am) is 22 dead. 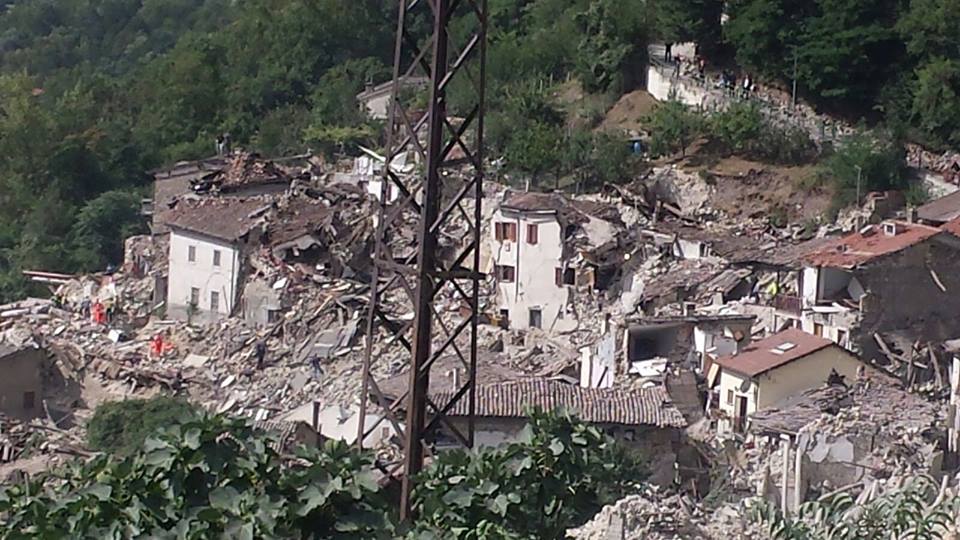 This is a mountainous region, with what few roads there are often winding through steep valleys with high, rocky peaks all around, so steep that in winter whole sections remain in constant shadow. The highways often drive right through the mountains and rock falls are common in winter. We have already seen photos of some of the tunnels partially collapsed. Reports have come in that emergency vehicles are having a hard time getting up to some of the smaller, more remote hill towns. Not many people still live in them, but those who do are nearly all elderly people.

As we started seeing reports of people killed – Amatrice just reported 22 dead and the town “no longer there” – we decided it was time to pray. The early hours of morning before dawn are cold, and the monks were in their hoods. Many of the local people and hotel guests had blankets wrapped around them. We all stood in a large circle as Fr. Cassian, seated on the steps at the base of St. Benedict’s statue, started the prayers in Latin. A number of people joined us, young and old. A girl about seventeen was standing next to me, wrapped up in a blanket under her boyfriend’s arm. Both were praying the old Latin prayers. All knelt and received the blessing after we sang the Salve Regina through another aftershock.

Some people from the city arrived in a truck and put out chairs. The hotel people came around with blankets. The chief of the Carabinieri arrived in his civies, the mayor was there with his wife. I helped hand around some pastries and fruit. We were asked to stay out of the buildings until at least 15 minutes after the last aftershock. It’s nearly 11:30 and we’re still getting them.

While it was still dark, but the sky was lightening, the monks and friends went to the shop to have something to eat and figure out where we were going to have Laudes. The painted plaster in the ceiling was cracked and much of it was on the floor. A few bottles were broken and we swept up the glass. Someone brought out bananas, pears, cornetti and coffee. We stood around talking and joking. It’s a funny thing that though we were scared, and with fairly good reason, the mood was cheerful. The first big tremor was over, and we didn’t think there would be another really big shake. We were mostly thinking about all that needed to be done to clean up and get life started again.

Fr. Cassian led the way down to the crypt church – the family home of Sts. Benedict and Scolastica – that has a sturdy vaulted ceiling and has withstood earthquakes since the 2nd century BC. It was an experience I’ll not soon forget, singing the Divine Office, Laudes for the Feast of St. Bartholomew in that ancient place, the monks voices strong and deep, resonating off the stone. Not one beat was skipped as another large aftershock shook us during the Benedictus. No one even glanced up.

Afterwards, I got a call from Vatican Radio, a friend who works in the English section wanted “local colour” for their story. I might post it if I can find it and if I don’t sound like too much of an idiot.

People are still pretty jumpy. Each aftershock, coming every ten or fifteen minutes, is incredibly unsettling. But the mood in town is still very cheerful. We are aware that other places near by weren’t so lucky and there are people here who have gone off to help with trucks and winches and digging equipment. Meanwhile, I was glad to run into friends in the piazza who told me that all their family are fine – including their dozen-odd pets – but that their house was un-livable. They have a kind of family compound outside town in the country, right at the base of the mountain; mum and dad in one house, brother and sister-in-law in the next, and the two of them in the third. There’s lots of work to be done to fix things up.

But this is Italy, and everyone knows we have earthquakes here. People will help each other, they’ll sweep and tidy, and help to rebuild. They’ll take each other in and make meals and look after the kids while the grownups work. It’s always been this way. It always will be this way. Thank God.