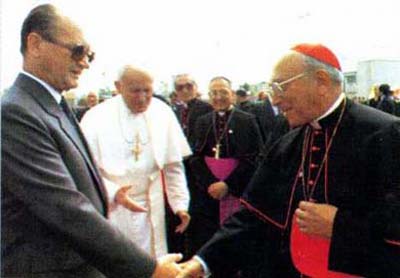 According to Chris Ferrara, Francis’ Prime Minister, Pietro Parolin (another formerly “conservative” weathervane,) has sold out the Catholic Church in China to the communist regime that wants them dead.

Wait, that sentence wasn’t clear. I meant, Parolin has sold out the persecuted Catholics in China to the Chinese government, which is the particular communist regime that wants them dead to which I was referring. These days one has to be specific. There are quite a lot of communist regimes around who want the Catholic Church dead. Including the one in Rome.

But I’d like to expand a little on what Chris has written. Chris has a habit, especially when he’s writing for Fatima Perspectives, of assuming quite a lot of background and historical knowledge of his readers. He mentions in passing, for instance the Vatican’s Secretariat of State having been “elevated to unprecedented prominence by the post-Vatican II reforms masterminded by Cardinal Villot,” that have “endangered the integrity of the Faith in order to serve the worldly dictates of Vatican diplomacy.” Without knowing who Villot was (a notorious Freemason, undersecretary and major moving force for the “progressives” at Vatican II, principal opponent of Archbishop Lefebvre, and Secretary of State for Paul VI) and what Paul VI did to the Curia on his instructions (placed the entire Curia under the thumb of the Secretariat of State, including the Holy Office – later the CDF) it would be difficult to understand the significance. This is one of those bits of historical information that is known mostly only to Trads.

The point for the newer reader to take home, though, is that whatever is going on now in Stato is not new. It isn’t product of any “new direction” or “reform” by Bergoglio, particularly regarding the situation in China. It is just the carrying on of the same plan that has been in place since about 1963, a plan enthusiastically executed under John Paul II and Benedict with those pontiffs’ full knowledge and approbation.

All this stuff stopped being a conspiracy when the conspirators won the Conclave of ’58 and then jumped out of the shadows declaring an unopposed victory in ’65. Once you’ve got that basic idea into your head, everything else stops being “confusing.”

I’m going to repeat that, so we can all remember it: What is happening now with Parolin throwing the Chinese Catholics under the Communist bus is just the carrying on of the Vatican’s policy in China since the early 1960s.

The Vatican has been doing everything possible to sell Chinese Catholics to the Chinese communists for decades. It’s not FrancisReform. It’s not a conspiracy. It’s just normal policy.

Now we hear from the current Vatican Secretary of State, Cardinal Pietro Parolin, that there is really no difference between the underground bishops and faithful, who refuse to join the schismatic CPA and suffer relentless persecution on that account, and the adherents of the CPA, both clergy and laity, who obey men rather than God by worshipping in accordance with the dictates of a communist and atheist regime that forces women to abort their own children.

As Cardinal Parolin declared in a recent interview with Avvenire, the newspaper of the Italian bishops’ conference: “The claim that there are two different Churches in China does not correspond to historical reality or to the life of faith of Chinese Catholics. There are in fact two communities that are both eager to live in full communion with the Successor of Peter. Each of these carries with it the historical baggage of moments of great testimony and suffering, which tells us something about the complexity and contradictions that exist within this vast country.”

Some years ago, I read a long article by a former Vatican journalist, Wilton Wynn, one of the guys who pioneered the field before there was a press office on Via della Conciliazione. Back in the day, one simply had to know people and talk to them at lunch. Some of Wynn’s connections were people in Casaroli’s Secretariat of State. It’s definitely worth a read.

I wrote a pair of blog posts, “Church of Traitors” and “Church of Traitors II,” about Wynn’s description of the origins of the Vatican’s longstanding policy – called Ostpolitik, basically meaning “appeasement” – with Communist regimes, and particularly in Paul VI’s time with Hungary’s Soviet leadership, Paul’s betrayal of Mindszenty that was the crisis that determined the direction not only of the Church until this day, but of much of the western powers. Basically, the Vatican has been selling out the Communist martyrs for the last 40 + years.

The story, if someone were to take it on as a project, goes back to the vile Freemason Villot, and then moves on to Cardinal Casaroli, Paul VI’s Secretary of State, and on to the JPII years when the Vatican started looking pretty schizophrenic. John Paul II (thanks mostly to George Weigel’s unreadable hagiographic fakery) is widely believed to have been a staunch and historically significant opponent of Communism. This might have been true in Poland, but emphatically didn’t extend to China. In ’80s and ’90s the Old Policy of Stato took the form of Cardinal Roger Etchegaray, John Paul II’s “special envoy” to China.

One of the “fruits” has been the steady withdrawal of the Vatican’s diplomatic support of Taiwan, a nation the Chinese refuse to acknowledge the existence of. Until recently, pretty much the only friends the Taiwanese had against their Communist Goliath neighbours was the US and Rome. I haven’t recently looked up Obama’s policy.

The Vatican’s Chinese Ostpolitik came under fire as late in the Jay-Pee-Too!-Wee-Luv-Yoo period as March, 2005. Sandro Magister wrote, a month before JPII’s death, “A Cardinal’s Flattery Doesn’t Set Any Bishops Free.” Of course, Magister’s mistake was imagining that this had been the goal of the Vatican’s policy in China in the first place.

Off the top of my head two incidents come to mind about one of Cardinal Rog’s trips to China. He gushed about how impressed he had been with the good manners and warmth of the Chinese government officials who showed him such a great time. He commented that on a Friday of his trip, he was astonished when at dinner, one of them mentioned that they were having only fish because, of course, they knew the good Cardinal would want to observe the Friday abstinence. The good Cardinal joked in an interview afterwards that these Communist officials were better informed than he was, since he hadn’t observed the Friday abstinence in decades.

Another memorable moment was the speech he gave in which he asserted that the old idea that there were two “Catholic Churches” in China was a grave error. No! No!, he exclaimed. “There are not two churches in China; but one Church with two faces…”

An apt but perhaps unfortunate choice of idiom. But oh, so very familiar.

One little piece of that trip keeps coming back to mind; that the Chinese government, while Cardinal Rog was being squired around for his carefully staged photo-ops, had ordered six Christian churches bulldozed…

Indeed, the Chinese government was better at sending messages than the Vatican men could have expected. Magister notes in his 2005 piece, “The latest Chinese Catholic bishop to leave prison is John Gao Kexian. He was arrested in 1999, at an undisclosed location. Last August, his family received his lifeless body.” The Chinese commies have a habit of rolling the prisoner’s naked body in a sheet of plastic and depositing it, dumped off the back of a van, on the doorstep of the nearest relatives. They’ve “released” quite a few Catholic bishops this way.

“There are now 6 Chinese bishops in prison. 13 others are under house arrest. 19 priests have been imprisoned or have disappeared, and three more have been condemned to the concentration camps. All of them are members of the clandestine Church, which refuses to be part of the “patriotic” Church controlled by the communist regime.”

The cardinal is Roger Etchegaray, from France, president emeritus of the Pontifical Council for Justice and Peace, and for many years the pope’s personal envoy to the world’s hotspots. On four occasions – in 1980, 1996, 2000, and 2003 – Etchegaray traveled to China, sometimes with the consensus of John Paul II. In the book he has just published, he gives an account of “what I have seen and heard” during his trips.

Evidently he saw and heard little, and that poorly. The China that he recounts – Etchegaray writes at the beginning of his book – is only the “little patch of sky” that “a frog from the bottom of a well” can see.

But then why did he not set this “little patch” beside the facts that his hosts carefully concealed from him, but which he could have learned from other sources, and if not at the time, then later? Why didn’t he dismantle the deception that these visits were composed of?

He didn’t do it. And with this Cardinal Etchegaray added his name to the disreputable list of illustrious pilgrims – from the world of politics and culture – who in past decades have visited the USSR, Cuba, China, and other such destinations, punctually making reports enthusiastic, naive, or in any case far from reality.

Why didn’t he dismantle the deception?

Some day, if you’ve a mind to read a little history, a book worth getting from a second hand bookseller is “Political Pilgrims” about the long history of western pinkos traveling to worship Marxism in those countries where it is fully practiced.