The bad news is that the tremors STILL haven’t stopped. Another 4.4 yesterday with the epicentre near by.

The good news is that the town isn’t waiting to get things going again. The people of Norcia are truly resilient and the readiness to help of the people outside is inspiring. I know that I would not now be OK if it weren’t for you all. My readers have been so generous that really my biggest problem is boredom and homesickness. But thanks to you all, I’m back to work and the kitties are OK. It’s just a matter now of waiting. It’s looking like maybe the end of January. But I’ll be going up next weekend to check things out in person, and bring up some supplies that you guys have helped pay for.

In fact, I get a lot of quite cheerful updates from many friends in Norcia. The town is certainly going to come back to life, and it’s already looking like it’s going to be sooner than we expected. The engineers have found that between 65 and 75% of the buildings are unsafe or destroyed, but this is probably mostly inside the walls. I know that a good many residences outside were damaged too, but a lot of them are OK. The old town, the centro storico, will probably be unusable for a long time. Probably at least several years.

But the town of Norcia is a lot more than the buildings. 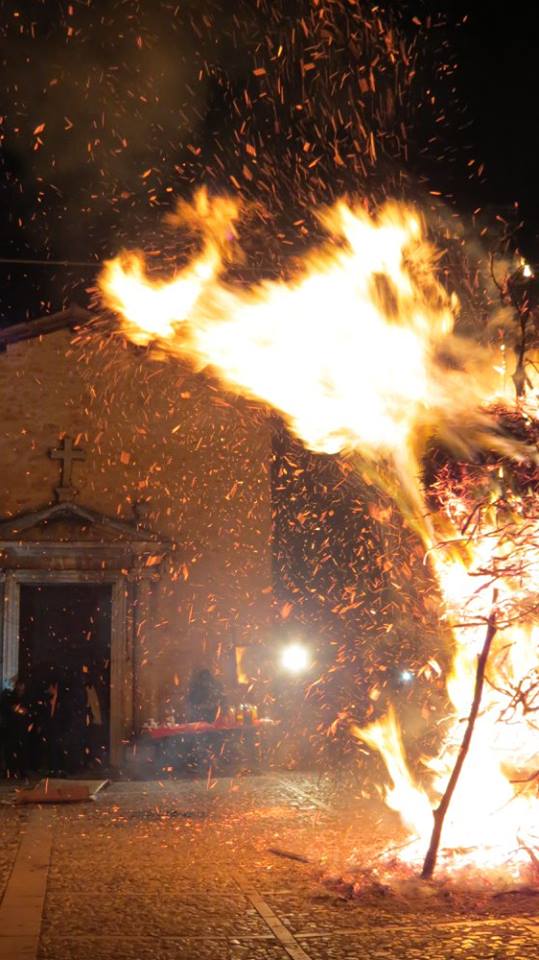 Not the biggest of the bonfires, but the most fun. Huge fire in the teeny, tiny piazza in front of San Lorenzo. You run through the little gap between the fire and the buildings, and you go and venerate Our Lady in the church alcove, and then you get a glass of mulled wine. It’s SO fun! 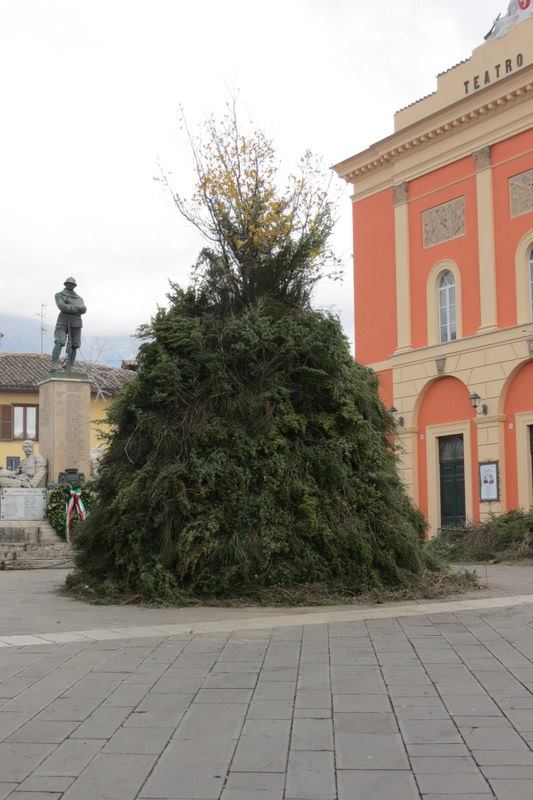 Last year, in the piazza del teatro, all ready to go.

I’ve heard from some friends up there that they’re doing Bonfire Night. It’s our annual winter festa on December 9th – in Italian I Faoni – that kind of kicks off the Christmas season.

Here’s the blurb from the FB page:

Rooted popular tradition that resists even the earthquake. An ancient tradition, this Valnerina to the legendary transfer of the house of the Virgin Mary from Nazareth to Loreto. The night between 9 and 10 December, called the Coming, every year in the country and in the countryside are lit fires that recall the miraculous passage of the Holy House carried by the Angels in 1291.

In brief, they build huge, house-size bonfires in a chain through the town, and with it, they set up big barbeque grills and on the night of December 9th, they light the fires in sequence and we all have a blast. 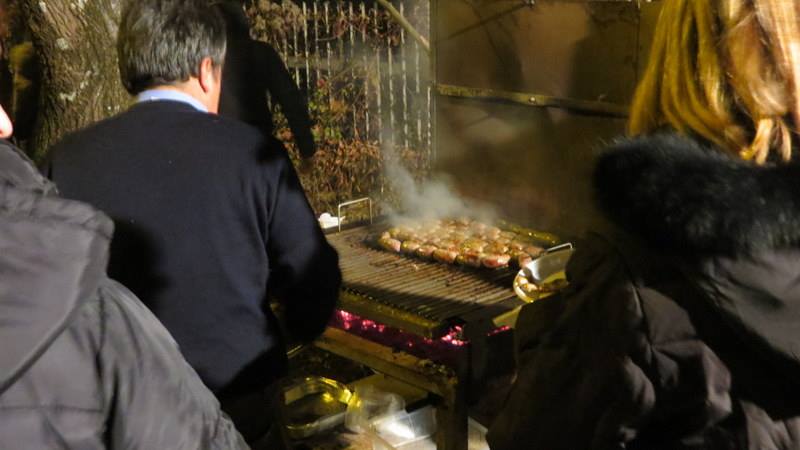 You go down the hill to the first fire, in a field outside the Porta Romana, about eight pm, and they give you hot grilled sausages and pork belly, dishes of lentils and truffle fritata and mulled wine. You stand about and chat with everyone and (take a few belts from the big jug of moonshine one of the farmers always brings). 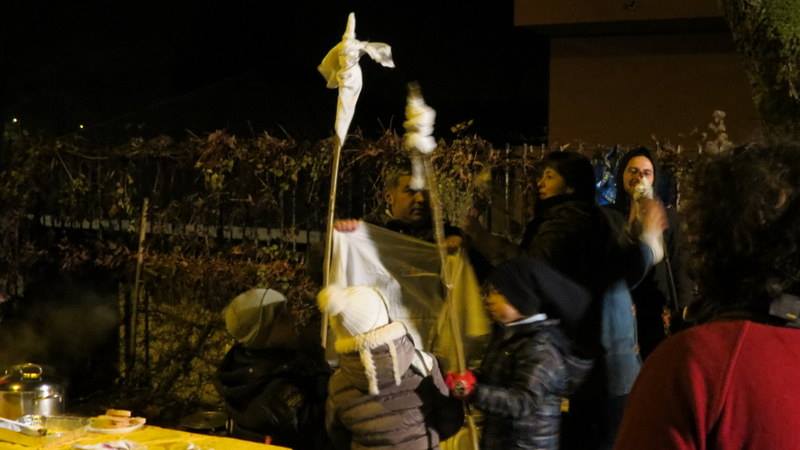 Then about nine, they give the kids long poles with a bit of cloth wrapped around the end. They bring out a bucket of gasoline and the kids dip the torches in. (I am SO not making this up!) 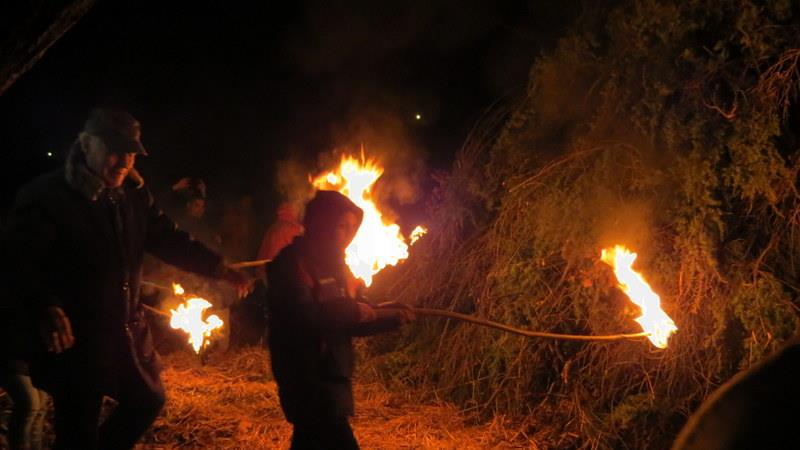 Then, standing well back, they light it up, and everyone cheers and laughs and has a great time. After it burns down a bit, you walk to the next fire inside the town, and do it all again. There are five through Norcia, and then you get in the car and drive to San Pellegrino where they have a few more, and so on down the villages in the valley. The kids let of firecrackers and have sparklers and there’s always a bit of home made music; a guy turns up with his hurdy-gurdy and there are bagpipers and huge fun for everyone.

Why do we do this? Well, I guess basically just because it’s fun to set things on fire and be outside at night and eat grilled pig.

The official excuse is religious and historical. It’s in aid of the Feast of Our Lady of Loreto. When the angels were carrying our Lady’s little Holy House across the dark Umbrian mountains, the people of the villages there thought they could use a bit of help seeing their way to Loreto. So in the 13th century, the vigil of the feast became Umbrian Bonfire Night when the villages all have a festa to light beacon fires to help guide the angels.

No one could stand the idea of the custom being interrupted this year, and as a signal that even the devastation of the earthquake can’t stop the Nursini doing their thing, we’re going to have a bonfire this year too.

Longer article on the history of the festa here.

The organization of the evening was always busy and its handing down from generation to generation is the exclusive result of the desire of some groups of people that just to relive moments dear to their parents and grandparents they sacrifice much of their time to the success of evening.

The evening of December 9 was always a feast for all, a big party waiting for midnight, the time when all the bells of the city move to announce the passage of the Holy House of the Madonna of Loreto . In fact, the sense of tradition, for the inhabitants of Norcia and the Catholic tradition, is right here. The fires are lit to commemorate and illuminate the path of the angels who, as far back as December 9, 1291, being occupied Palestine by the infidels, led rescue the house of the Virgin, traslandola miraculously up to a grove of laurels, Loreto today.

The fire is the symbol of love that descends on Mary and the Apostles in the Upper Room, transforming the disciples into courageous preachers and able to make himself understood by people from various countries. Symbols and rituals, forces of nature and good will, everything is enhanced in this night of Norcia ground.

It’s hard to explain such a mystical event. In the village Norcia, despite the passing of the years, a sense of tradition is still strong and you can feel it in the streets and people for many days before. Each of the seven districts, one for each port city, it gives the representatives that they can, for enthusiasm and ability, giving life to faoni.

And here’s an inspiring story about how the internet has made it possible to help people directly and immediately, bypassing bureaucracy and red tape. The story of a family farm and prosciutto business. Neither government nor insurance companies were going to act fast enough to save the family’s business and farm, and particularly their pigs. Their animals were threatened with cold and the wolves (yes, the four footed kind) when the quakes destroyed their barns and farm buildings. An inventory of proscuitto worth thousands of Euros was going to spoil.

But here comes the internet to save the day, and a crowd-funded appeal means the business is up and running again, animals safe and stock sold off.

The Farmers, Their Little Pigs And The Wolves: An Italy Earthquake Survival Tale

A damaged building in a production of traditional ham (prosciutto di Norcia), on October 31, 2016
Norcia, Italy: Italy’s earthquakes would not leave the Fausti family alone.

The first of this year’s devastating tremors, on August 24, left their farmhouse on the outskirts of Norcia looking like a bombed-out shell.

Asleep inside at the time, pig breeders and award-winning ham producers Ada and Giuseppe Fausti were lucky to get out alive.

Three months later, Ada allows herself a wry smile as she inspects a first floor bedroom that is now open to the elements on two sides.

“We did have a pretty miraculous escape,” she says. “What we didn’t know was that just the start of it.”

This time the epicentres were much closer to Norcia, a town with medieval roots that has long been synonomous with production of the cured hams, salamis and pure pork sausages that are cornerstones of Italy’s culinary heritage.

In the space of six days, the Faustis lost the use of their pig barn, their curing store and the shop where they treated customers to tastings of prosciutto crudo (raw hams) and other acclaimed products from their stock of indigenous, free range Suino Cinto and Rosa Perugino pigs.

To add insult to injury, the quakes also disrupted a supply of spring water that had kept 400 pigs watered while they foraged freely across 100 hectares (about 250 acres) of wooded mountain side in the Monti Sibillini national park.

With no barn to shelter sows before and after giving birth, new-born piglets suddenly became vulnerable to the threat of wolves that roam the rugged Appenine highlands.

The trauma of the quakes also took its toll: most of the sows carrying litters at the time miscarried.

Central Italy was struck by a powerful, 6.2-magnitude earthquake on August 24. (AFP)

The Faustis meanwhile were left desperately wondering what to do with more than 200 valuable prosciutto legs they had no place to store.

With the total damages running into seven figures and virtually none of it covered by insurance because of the region’s record of seismic activity, it seemed for a while as if the business would be reduced to rubble just like St Benedict’s basilica in the heart of Norcia.

A month later, however, the family business is up and running again, their savoury delicacies once more being dispatched to discerning customers around the world.

A media appeal launched by daughter Valentina ensured all the hams without a home were sold, friends pitched in by offering temporary shelters, the curing centre has been patched up sufficiently to resume operations at around half capacity and a new wooden barn is on its way to the farm.

“Solidarity worked well,” says Valentina, but she admits it has not been easy. “It has been non-stop, I think the worst thing is never having any time when you can just relax.”