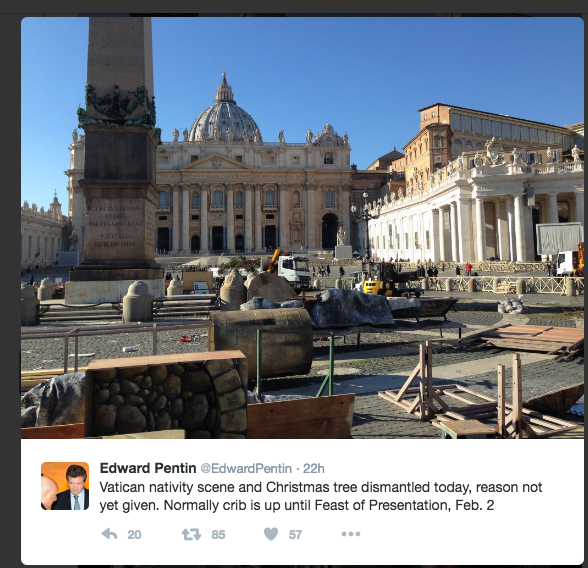 We must have been bad children.

Or maybe he just figured Christmas is over now that he’s finished his own list of public browbeatings and has run out of creative insults to fling at his employees, officials and assorted serfs.

Those are nine major moments when the eyes of the world, especially the ecclesiastical part of it, are on the pope. Moreover, they come at a time when people are usually in a festive mood, more inclined to let bygones be bygones, so they create a natural chance for any pontiff to do some fence-mending if he perceives the need…

However, reaching across the aisle wasn’t quite the spirit Pope Francis exuded this holiday season. Instead, he appeared to project resolve to keep going.

He can also be genial, funny and compassionate. But this side of his personality is increasingly reserved for his inner circle and his allies.

All popes have inner circles, it goes without saying. What distinguishes Francis from his recent predecessors is the nature of the alliances he forms. He is far more brutal in the exercise of his power than, say, Pope John Paul II, who certainly had an authoritarian streak in him.

Bergoglio divides the church into those who are with him and those who are against him — and if he thinks you’re in the latter camp then he’ll come after you,’ says a priest who works in the curia…‘

It’s not hard to detect a Latin American flavour to the deal-making and settling of scores that has become blatant over the past year. Most Catholic bishops had thought Francis was a plain-spoken and perhaps touchingly naive reformer. Instead, they are confronted by a pope who is simultaneously combative, charming, bad-tempered, idealistic and vengeful.

I think the reported conversation Muller tried to have with him about the sacking of three priests at the CDF probably summarizes the character of the Holy Father.

He [the Prefect of the Congregation] was very perplexed because it was about three excellent priests who are among the most capable professionally. He first avoided obeying and several times asked for an audience with the pope. He had to wait because that meeting was postponed several times. Finally, he was received in an audience. And he said: “Your Holiness, I have received these letters, but I did not do anything because these persons are among the best of my dicastery… what did they do?” The answer was, as follows: “And I am the pope, I do not need to give reasons for any of my decisions. I have decided that they have to leave and they have to leave.” He got up and stretched out his hand in order to indicate that the audience was at an end.

I read it and thought, “What does that remind me of? I am the something… Something-something…”

I have described what I call “The Dictatorship of Mercy” — the unrelenting Vatican agenda-by-diktat, couched in the terms of “mercy” and “accompaniment” but as authoritarian as any program implemented by an autocratic regime. We have been given several recent examples — from the exile of Cardinal Burke to the purges at the Congregation for Divine Worship and the Pontifical Academy for Life to the assault on the John Paul II Institutes for Marriage and Family to the unexplained, papally-ordered firings at the Congregation for the Doctrine of the Faith — that opposition will be crushed.

As John Allen and Damian Thompson both note in their own ways, there is a never-ending stream of indications that we’re looking at someone who is totally absorbed in his agenda, to the exclusion of even the most basic niceities, a man, as a former Vatican nuncio to Argentina put it, “sick with power”.

But one small indicator stuck in my mind this year, from a pal who works inside one of the Vatican’s offices. He said that normally, long in ages past, Vatican employees would get a nice little Christmas card from the papal office, a panetone and a bottle of prosecco. Well, the panetone and prosecco have disappeared in the last couple of Christmases, but this year the pope topped his Scrooge routine by sending out…

Yep. The Vatican’s lay employees got an emailed form letter. I suppose it’s better than the annual beatings the Curial officials get.

More and more, Francis can be parodied with simple Youtube clips of the great Vaudeville villains of the screen.

Too bad he lacks Alan Rickman’s flamboyant charisma, though.