Today’s list of little shakes, up to nine thirty this morning, includes a not-so-little one. I have found that you can feel anything over 3.0 and in fact you can even hear them coming towards you, like waves, from the epicentre. I’ve learned that, on the whole, you can’t feel anything under 2.5; over 4.5 you can get structural damage; at 5.5 you’re running for the door while the dishes leap off the shelves around you; over 6.0 and things start collapsing and people die. The geologists and seismologists have said conflicting things, but it seems from our experience on January 18 that we’re not out of the woods yet. 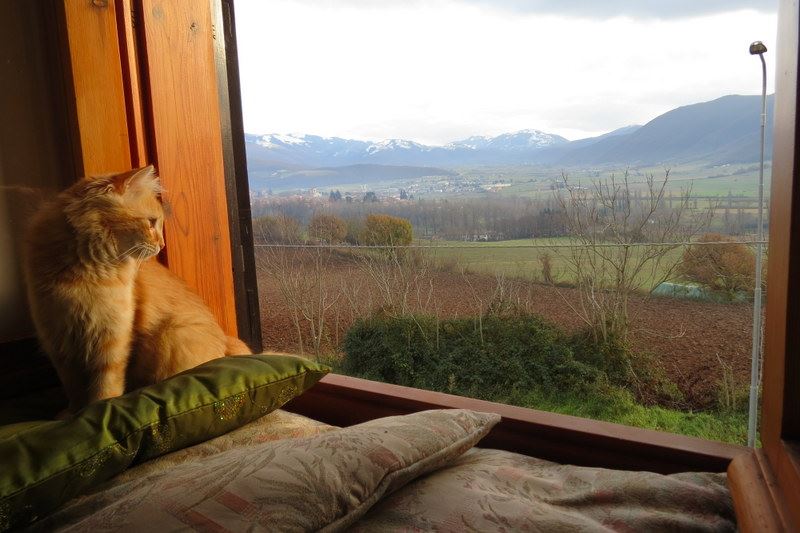 But I figure if my house laughed off a 6.5 – which is pretty much the strongest quakes Italy ever gets – it’s going to stand up pretty well to whatever we’ve got left to endure. At least, that’s the red I’m putting my money on. Eventually you have to just man up, go home and get on with things.

That being said, I’m more grateful than I normally express for the many notes I receive assuring me that people out there are praying for me and the wee beasties. I’m going back in a couple of weeks, and though I am happy beyond words to go home, I haven’t forgotten what it is like to feel a hundred earthquakes a day, to wake up five or six times a night to the house shaking and the dogs barking, to have nightmares of being trapped in falling buildings, unable to rescue friends from their houses. I was pretty cheerful about the whole thing until the October quakes, and we had to run for it. PTSD is for the weak. But it does catch up with you eventually.

I did still point and laugh quite a bit after the Jan 18 shake (5.6) when I read in the Italian news that the Romans were “flooding” the emergency services lines asking for psychological help because of being “terrorized”… Uh yeah… guys… Rome was 200 km from it. Grow a pair, ya pathetic city-slickers. Try it 24 hours a day and directly under your feet for three months and see what’s left of you.

I did have some pretty awful recurring nightmares for the first month or so after we left. Nearly always involving trying to flee while carrying a huge box of cats. But now the nightmares have shifted to being unable to get home, which I think is my brain’s way of telling me it’s ready. So, yes, please do keep praying for me. I’m amazed this is happening out there; and thank God again for the internets so no one is ever really alone.

I’ve got some plans for when I get back, but they don’t involve very much writing online. I’ll see what sort of thing I can get set up for the internet, but I don’t think I’ll be having it at home at all. I don’t plan to go silent entirely but I want to shift my focus onto other activities, including income sources other than news writing. (I’ve actually been painting quite a bit, and have some good ideas for larger pictures.) Or at least, writing about the catastrophe. Other people, with a lot more energy than I have, are doing a much better job of keeping y’all informed and I can’t recommend them strongly enough.

But this, increasingly, is not something I can keep doing. For a very long time, while I was involved in political activism, I had the nagging suspicion that we were doing it wrong. That if the solution were to organize rallies, write articles and lobby parliamentarians, then Our Lady would certainly have mentioned it at Fatima or La Salette. Instead, she said something quite different. But we like to do our own thing, don’t we.

I will share that for the two years I was in Norcia I was caught in a more or less permanent state of interior conflict between two alternatives that I think – given the makeup of my character – are actually opposed. In short, I was being asked by God to choose, and not being willing to do so, I fudged, avoided and chose distraction from the conflict instead – the internet being more or less the equivalent of crack for people with brains like mine. This did not produce a good result, and the many times I sat down with Fr. Spiritual Director and had him gently berate me for my fence-sitting seemed to produce no breakthrough or decision.

Then the quakes came and decided for me. So in a sense, going home now is like a re-boot, a chance to re-make that fundamental decision and start over. And this will be in a place and condition where the same pleasing distractions are no longer available. God in His permissive will, has solved my interior problem for me by making it exponentially – “orders of magnitude” being a phrase that has a lot more meaning to me now – more difficult to avoid Him.

So, I guess I’m saying I’ll still write, but I’m not sure yet exactly how much or where or on what. We’ll see how it plays out as we go along, OK? But as I said to a friend a while ago, Don’t abandon us. And I won’t abandon youse.

The other day the bishop of Norcia-Spoleto issued a brief letter reminding Catholics to put themselves in God’s hands, and recommending prayer and fasting. On the Facebook list where the Nursini diaspora goes for news and information, many people reacted with anger, as though his suggestion of fasting was somehow outrageous and strange. It seems they had never heard of the normal Catholic spiritual practice, and were outraged that the bishop would suggest to the already suffering Nursini that more privation and suffering could be good for them.

At the time I didn’t want to put up a note refuting this. I’m a straniera and can well imagine in such an atmosphere how it would look for a foreigner to lecture people who have lost their homes. But it does say a lot about how far things have gone in Italy that Italian Catholics have never heard such a wild and outrageous suggestion that prayer and fasting could be of spiritual benefit in a time of crisis.

Today someone put the bishop’s letter up again, and I ventured to say:

I was surprised to see the shocked reactions to the suggestion of fasting. I agree that it would not be the most thoughtful suggestion for people who live in cold conditions in tents and campers – certainly that is penance enough for anyone – but it’s not a strange or bizarre idea in itself. Traditional spiritual teaching fell silent in the Church over the past 50 years, so maybe people have forgotten or never heard – this is a gross negligence of bishops and priests – but fasting is a normal spiritual practice in the Catholic Church. Lay people who have never heard of this and they get upset when a man of the Church suggests that we do not think twice to be told by a doctor or a fitness trainer to go easy on the bread or chocolate for their physical health. I do not like this bishop, and for the same reasons as most people who do not like him, but as the English say, a stopped clock is right twice a day, and it seems unfair to get so upset the only time he does say something authentically Catholic.

In fact, I would suggest that coming from such a flawed source the suggestion seems even more powerful. Bishop Skinny McFancypants, addicted to his mirror and the attentions of the cameras, could not possibly have made the suggestion without the prompting of the Holy Ghost to speak with authentic apostolic authority. I have spent the last few months trying to figure out what God wants me to do next, vacillating between this or that idea, wondering if I should look for another monastery in a safer place, or perhaps just go back to full time activism. However, I had forgotten that God normally speaks through His authoritative delegates. Fr. Spiritual Director, and my superior in Oblate-religion, has told me to come home as soon as possible, and our bishop has now told us plainly what to do. Since none of these instructions in any way impose a moral difficulty, nor are they physically impossible (since I got the call from Realtor-Sandro about the house being OK), I’ll take that as clarified. Thanks Lord, that was nice and clear.

But yeah, do keep the prayers coming, and thanks.

(And, though it grates on my English soul to be such a pest, donations are always welcome.)