Despite their obvious seriousness, their great import, it is still true that some of Our Lady’s warnings at Fatima remain somewhat mysterious. Right now, we can look just at the warnings that were about what would happen if the consecration of Russia didn’t happen.

For instance, what exactly did she mean by “annihilation of nations”?

Now I’ve had a few ideas pop into the old brain, and I’m just putting them out here for some consideration. I’m about as far from a Fatima expert as can be, and I’m really just thinking out loud here, so feel free to get into it with me, or throw out your own ideas.

The other day I posted a video of our friend Brian McCall talking about this phrase and its relation to abortion. Of course, he’s quite correct. The last time I looked it up they were doing about 50 million a year around the world. That’s 50 million people killed every year, totally innocent of any kind of wrongdoing, with no means of self defence, and no one defending them. In sheer numbers, that’s the populations of whole nations, every year. There are 60 million people in Italy right now, or thereabouts. It’s one and a half Canada’s every year.

This is perhaps a legitimate way of looking at the “annihilation of nations” thing, perhaps. Certainly the proliferation of abortion as a keystone of the Sexual Revolution is a product ultimately of the “errors of Russia.” So that also fits. And I guess when people who are interested in Fatima talk about it, that’s what they talk about most often, and rightly so.

Still, I think there are one or two other points that could be made about the current situation that still have a strong connection to the “errors of Russia” theme. But these other things that are going on right now don’t pertain quite so directly to abortion.

Of course, this child of the Cold War isn’t ever going to forget the most obvious. Nations, in the sense of geopolitical, legal entities could be wiped out at the turn of a key, as we have known all our lives.

The Wiki definition of a “nation” will do for now:

“A nation (from Latin: natio, ‘people, tribe, kin, genus, class, flock’) is a large group or collective of people with common characteristics attributed to them — including language, traditions, mores (customs), habitus (habits), and ethnicity. By comparison, a nation is more impersonal, abstract, and overtly political than an ethnic group. It is a cultural-political community that has become conscious of its autonomy, unity, and particular interests.”

What is happening to the unique nations of the world? How English are the English these days? What about the Germans, the Italians, the Spaniards…? I’m thinking about homogenization, cultural erosion on a global scale. It’s called “Westernization” in places like Japan and Korea. In Europe we call it globalization. Pundits sometimes call it Disnification. But it all amounts to the same idea: the same-ification of the whole world.

I saw it a lot in England. Even the Guardian complains that English people are losing the sense of who they are; 30 year old housewives who can’t make a pot of tea; school children who think Chicken Tikka Masala is the “national dish” of Britain. Tory MPs complain that the curriculum is being ethnically cleansed of English, Welsh and Scottish history. And don’t even get me started on the “Church of England.”

I just remember the time my Auntie Gill and I went shopping in Chester some years ago, a beautiful medieval/Roman market town, for presents for the kids, my cousins, at Christmas. I wanted to get some Winnie the Pooh stuff for the youngest, Ben. There was loads… all of it the American, Disney version. EH Shepard’s drawings were nowhere to be seen, and none of the shop people had any idea what I was talking about.

And we know that “national identity crisis” is the kind of cultural assault perpetrated quite deliberately by the people running the show to grind down a nation’s sense of self. It’s what Pierre Trudeau (on orders, no doubt, from his puppet master, Lester Pearson, Maurice Strong and God only knows who else) did to Canada. Until the Trudeau revolution, that coincided, btw, with the anti-Catholic, secularist cultural pogrom in Quebec that we now know as the “Quiet Revolution,” Canada knew fine well who we were. We were the proud colonial English, Scottish and French synthesis, the grand success story of peace, order and good government, a great and prosperous, peaceful jewel in the crown of the Empire, ready to fight tyranny ferociously for the mother country.

And what has been the source of this cultural dissolution, the corrosion of the cultural uniqueness of nearly all nations that the “West” has touched in the last century?

All the nations of the world are slowly being sucked into the great maw of “Westernized,” “globalized,” post-industrial, Buzzfeedified, culturally-marxified sameness. Take just one aspect, one of the most essential; launguage.

The 20th/21st century has seen the exponential increase in what anthropologists call “language death”. Even the lightweights at Ted talks have figured this out.

“Political correctness” (the polite term for cultural or Gramsciist Marxism, voluntary self-censorship) has helped a great deal. We see many news articles in Britain describing, for instance, “British girls” running off to join ISIS. But in what sense is a Muslim girl, born of Pakistani parents, raised speaking Urdu, attending a school with 80% Pakistani Muslim pupils, completely bubbled-off from British culture… “British”? The Swedes are almost legally obliged to refer to their Islamic invaders as “New Swedes,” perhaps one of the more obvious examples of this increasingly heavy handed, anti-cultural imperialism.

This, for want of a better title, is the Geroge Soros Dream, and the dream of all the followers of that strange anti-creed of theirs; the “borderless society,” the one world culture, the global state… All the conspiracy-nut theories about what these people want to do to the world can be summarized, can it not, in the phrase “the annihilation of nations.” 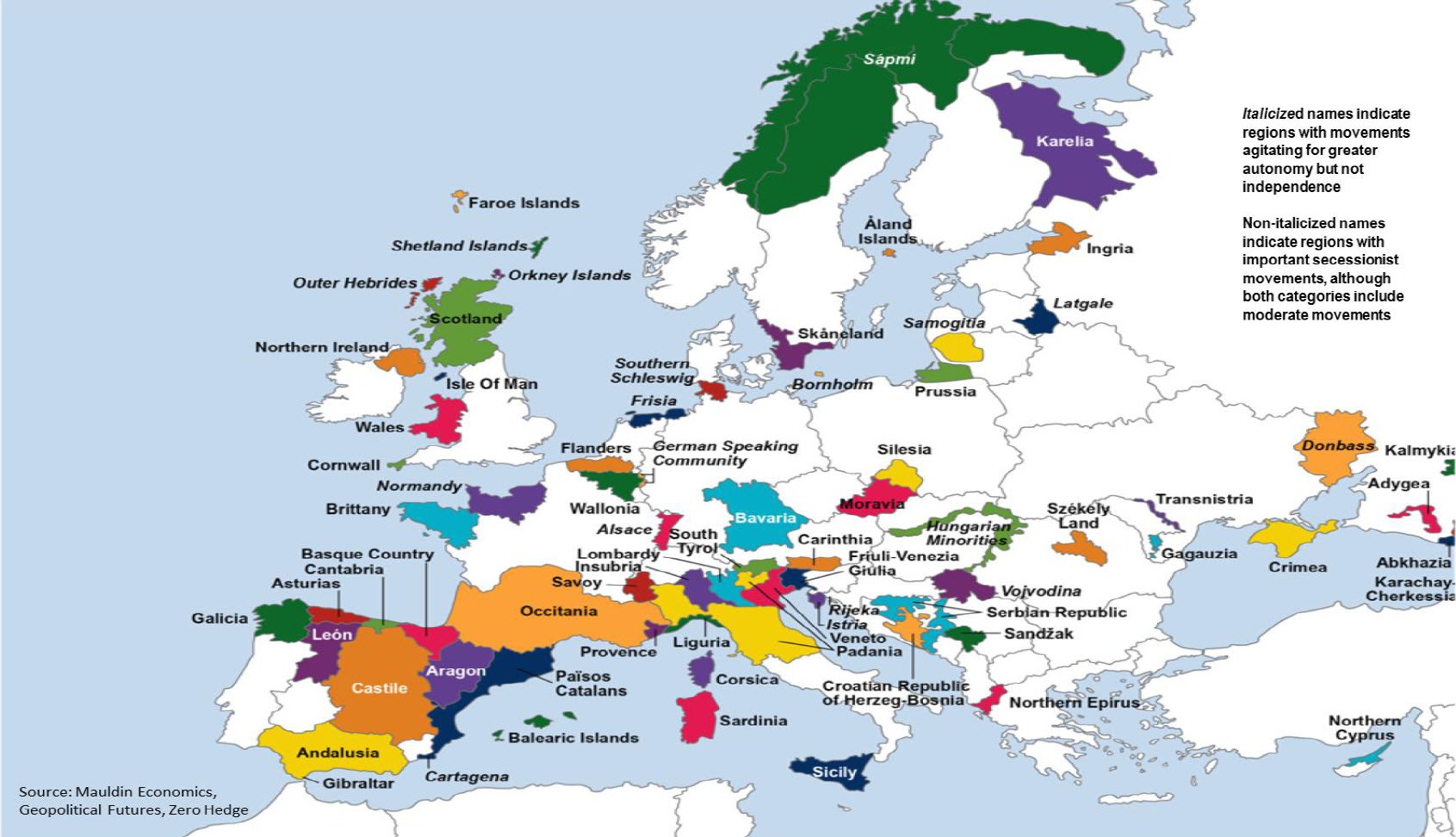 The European Secessionist map. These are all the regions – many of which are defined culturally and/or linguistically, that are in small ways and big currently trying to secede from the countries they are now part of.

Now here’s another way in which perhaps the Annihilation of Nations could be brought about. It seems that Europe is busy breaking up, into hundreds of nationalist/separatist/regional divisions. Mostly in response to the absurd and destructive policies of the European Union.

An Explosion of Localism: An Effect of the European Union

One of the Europeans‘ mantras is that the Union will ensure stability and peace. In fact, if we examine the facts, the Union, through the weakening of the national states, kicked off a series of conflicting local interests and local and claims that take more and more ground and can also lead to conflicts. Just remember what happens between Spain and Catalonia, or the Scots claims, but in reality the problem is broader…

Just a few things to think about…