I was involved in the SCA for about 20 years, between 11 and 30, and I met people who dreamed all the time about “living it full time,” but SCA people are almost exclusively city folk – often with computer-related jobs. I know a few who took what they learned in the SCA and took the plunge. A guy who had a very illustrious career in the SCA and was an IT guy IRL quit his horrible desk job and started a hand-made wood furniture and interior carpentry business that is flourishing. I met another guy who trained in finance and joined the SCA, got himself apprenticed to a smith, and finally quit the banking world, grew a huge beard and built himself a portable smithy, and now travels up and down the I-5 corridor making metal things in front of fascinated crowds in summer, and makes metal things in his garage workshop in winter. Happy as a clam. A very furry clam.

It’s possible to just chuck it and live differently. What’s really hard is the will. You can want to do it, and you can wish you could do it, and you can sigh enviously when you see other people doing it, but to actually do it is really just a matter of using your will to do it. Which is why it sort of vaguely annoys me when people write to me and say things like “Oh you’re so lucky.” Well, in one sense yes, a bit. I was lucky enough to be born a British citizen, which because of the EU – which we don’t like – means I can live in Italy without any kind of immigration restrictions. (Not that that means anything these days!) But other than that, it was just me deciding to do it.

It wasn’t easy, by any means. It took my boss and some friends quite a long time to talk me into moving over here, and quite a bit more time to mull things over to move to Norcia (the decision to move away was made for me…) I take a long time to think about things, and I’m kind of a chicken about doing something new. New and different things scare the crap out of me, to be honest. And there’s that whole part of it in which doing one thing means not doing all the other things. Positively doing one thing necessarily requires a kind of relinquishing of “options” that might be what modern people are most afraid of.

But a long time ago, when I was breaking out of the pagan fatalism I’d grown up with, that is what’s left of “western values,” I came to the astonishing realization that you could do things if you just decided to do them. It sounds a bit silly to put it that way, but the idea that there is such a thing as human volition really drives against the entire victim-culture that the secularists want us all to adopt. Pagan Fatalism and the misery, depression, helplessness and victimhood it engenders (cf: Islam) is the condition of mind these people want us to have. Doing things independently, coming up with an idea of how you want to live, figuring out the steps it takes to get to it and doing them one at a time until you’ve done the thing, is something they don’t want us to discover.

If I were to put this idea into the kinds of terms commonly used in our current political discourse, I’d say, “Doing things is conservative; giving up, quitting, complaining and being helpless, dependent and miserable is liberal.” Keeping this in mind means even “failure” doesn’t stop you. The word becomes meaningless.

A few years ago people started asking me if I would start writing books. Of course, my instinctive reaction was that I can’t possibly write books! I don’t know how, and I’ve never done it before. Those old quitter-instincts die hard. But then someone said, “How much have you written in just the last ten years?” No idea. A lot. “Could you write ten articles about one topic?” Yeah. “Then you can write a book.” Then he gave me $2000 (Canadian, so, you know, like about 50 euros) and I wrote him a book. In two months. It financed my move to England.

Well, now I’m writing another one. Or at least, “ghost writing,” large sections of it. For money. So I guess my childhood “dream” of being a writer when I grew up has come true. But it wasn’t because a fairy godmother or a welfare state appeared suddenly and tinged me on the head with a wand.

I wonder what else it’s possible to do if you decide to. I’ve always wanted to live in the country and do country things. Apparently you can do that if you decide to do it too. Who knew?

It reminds me of that guy who quit a superstar career as a football player and bought a farm. An interviewer asked him how he had learned farming, he said, “YouTube!” And his neighbour farmer friends helped him. (I suppose zillions of bucks from being a football superstar didn’t hurt either.)

This guy was seriously inspirational for me.

How do you want to live? What do you need to do to make it happen?

A while ago I “wished” I knew how to make beer. 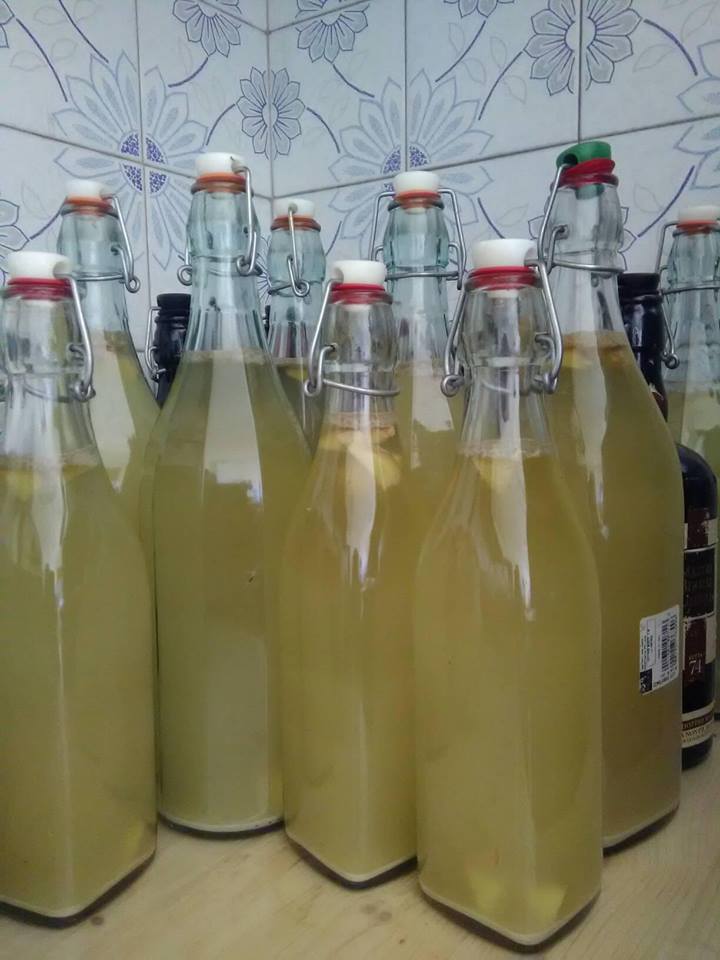 I couldn’t find any beer yeast in the village shops, so I used this thing, “lieveto madre” that I think is the equivalent of our sourdough starter, but it said on the packet that it was made from beer yeast, so I figured what the heck. It smelled a bit like pizza at first, but soon smelled nice and beery. It sat in the big bucket for a week, until, as per instructions, it had mostly stopped its mighty fizzing, but I could see it was still active. Tasted like beer too. Into each bottle I put a few little pieces of this super-strong fresh organic ginger we’ve got around here, and I mixed up a little more yeast with some honey and spooned it into each bottle.
Bottled it up last night, about 25 litres worth, I think. (All the bottles were different sizes, so I don’t really know.)