So they decided to offer a paraliturgy… 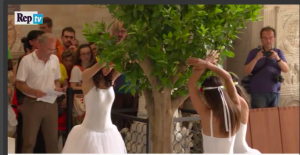 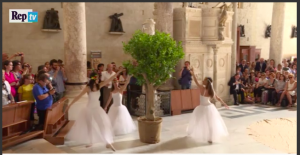 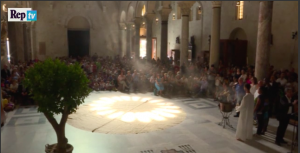 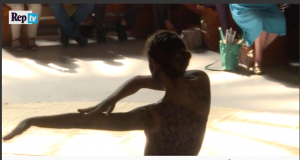 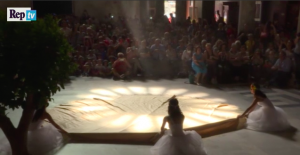 I’m helpfully informed by the history people that actual paganism involved a lot more slitting the throats of animals and looking at their entrails, (which must have made temples smell pretty bad) so I guess Catholic paganism is an improvement. I’m sure animal-sacrifice wouldn’t be so popular with the tourists as the naked snake-lady doing her sexy-dance. (But you never know, right?)

There’s not much more, but you can see the rest here.

Here’s a Google translation of the blurb:

It has always been the festival of light, it is the start of the new season and coincides with the longest day. On June 21, in the Cathedral of Bari, on the occasion of the Summer Solstice, at 17:10 the sun’s rays coincide with the circular image of the rose window designed on the floor before the altar. An event that attracts hundreds of faithful and curious: on this occasion the parish has organized a series of activities and events before and after the event.

You know, another feature of pre-Christian classical paganism – and contemporary paganism in India – was temple prostitutes.

One has to wonder…

A friend who lived there for several years until recently, helpfully helps with useful information: 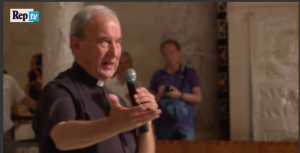 The idiot in question

The idiot who runs the Bari cathedral is terrible.

He had Muslim prayers in there last year. Shame to spoil such a beautiful Romanesque building.

Ironically 3 min walk from there Don Nicola Bux celebrates the traditional Mass every week. (The age cohort at Fr. Bux’s mass is much younger than the cathedral’s.)

My friend points out that the (beautiful) baldachino in Bari cathedral dates to the times when the area was under constant assault by Islamic invaders trying to conquer and subjugate Europe.

It does rather bring Monsignor Bux’s comments to Ed Pentin the other day into high focus:

“If the Pope does not safeguard doctrine,” he adds, “he cannot impose discipline.”

Seriously, I think we’re a bit past that stage, but thanks for helping.

It strikes me that there’s a sense in which there’s not much point in getting one’s knickers in a twist over what’s going on in Rome.

The farm got sold a long, long time ago.