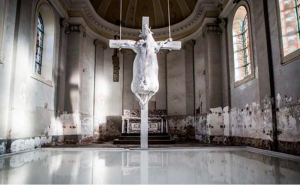 Yes, it’s real dead cow. Painted white. The shiny white surface in the foreground is a big pool of milk.

It’s been installed in the church of Saint John the Baptist of Kuttekoven, in the Flemish town of Borgloon. In case you’re really interested, here’s some more work by the man who did it. Click on it if you really need to be more outraged than you already are, but really, I’d recommend against it. And here’s a local news item about the protests by local “conservative” Catholics, in case anyone is still shouting fake news. (Though really, how “conservative” does anyone have to be?)

The guy said it was about “modern wastefulness”. “The cow on the cross, surmounting a basin containing 5,000 litres of milk, is supposed to symbolize industrial breeding and thrown-away food. Visitors are welcomed with beef and cheese appetizers.” Of course there was absolutely no way to object to “modern wastefulness” except to create a blasphemous mockery of a crucifixion in a Catholic Church.

ahem… sorry… something caught in my throat…

I don’t think we really need to talk too much about this. LifeSite confirmed it’s a real thing, and that this “artist” has the permission of the bishop to have this going on. One point by our friend Jeanne Smits at LSN was worth repeating: “Herck openly admits he is particularly seeking to attract attention to the ‘innumerable’ churches that remain empty in Flanders on Sundays because, he says, the Flemish are no longer interested in ‘insufferably tedious Masses.’”

Some of these stories just take the stuffing out of you. They can make you feel legless and hopeless, as though there’s not even any point in protesting. I don’t know. Go sign the petition, I guess… I think after 20 years of this stuff, I’m kind of all outraged-out.

This is in fact only one tiny little thing, a drop in the bucket of the incredible tsunami of blasphemous “art” – always directed at Catholicism’s iconography – intended to enervate and depress us. People are protesting it, I’ve seen some coverage in Italy too, but even a two minute sweep of Google news will uncover dozens a day in a similar vein. One of them was a “piece of performance art” that featured a naked man using a cheese grater to destroy a small statue of the Virgin Mary while people sat around and took selfies. What’s the point of it? To demoralize, and nothing else.

The petition is here, for what good it will do. A bishop – Mgr. Patrick Hoogmartens – who thinks this is a good idea is already so far gone as to be obviously and ipso facto impervious to any complaints of sacrilege. But sign it anyway, because it’s a good thing to object out loud.

But to stop the wholesale slide of the Catholic Church of Europe into outright satanism, I’d suggest offering a Rosary and doing a little fasting as being quite a bit more efficacious than an online petition.

Also, let’s not forget what this kind of “art” is actually about, even on those increasingly rare occasions when it’s not a straight-up spitting in the face of the Catholic Church.

(Language alert: completely fed-up person who doesn’t hold back and is from Sheffield.)

And Mike has a few interesting additions here.

But really, how much more do we really need to hear?