Sneak peek of my next for the Remnant print edition, to be made available online next week: “The unique horror of the Bergoglian pontificate for laymen.”

A friend… “having married instead of going forward into the priesthood, took a degree at the late, lamented Pope John Paul II Institute, and began work in the great effort to restore the Church’s public voice on “life and family” matters. He has done this work for many years now, he has married and bought a house and now has four small children. He wrote to me a short time ago in a kind of agony of indecision. Faced with the Filial Correction, he felt obliged in conscience to sign; as a representative of a bishops’ conference, he believed it would jeopardize his employment, his home, the spiritual and material wellbeing of his wife and children, their hopes for a secure future.

My friend is certainly one of those who have been helpfully proving my thesis that this pontificate is the wake-up call “conservative” Catholics have been needing. He asked if I had been joking when I wrote recently that there is no reason not to think that the current situation will continue – and continue to worsen – following the end of the current pontificate. “No, sorry; there’s no end in sight,” I replied. “This is the dark night of the Church, the valley of the shadow of death.”

Well, not if you talk to this guy. 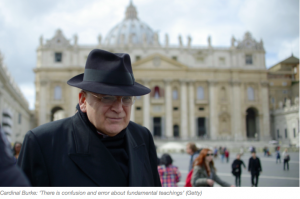 The latest rumours are that the Dubia is a dead issue, finished. Caffarra and Mesiner are dead, Brandmuller is refusing to go forward. Burke is alone. (And as for Brandmuller, imagine being that age, believing in God, and knowing you are soon going to meet Him and also knowing you were one of four people on the planet who had a chance to do something to save the sheep being eaten, and you just didn’t because it was too scary to confront the wolves. Just let that one sink in a moment.)

Your Eminence, you have recently referred to our times as “realistically apocalyptic”. And you added that the “confusion, division and error” within the Catholic Church coming from “shepherds” even at the highest levels indicate that we “may be” in the End Times. Would you help us to understand what you meant by this?

CARDINAL RAYMOND BURKE In the present moment there is confusion and error about the most fundamental teachings of the Church, for example with regard to marriage and the family. For instance, the idea that people who are living in an irregular union could receive the sacraments is a violation of the truth with regard both to the indissolubility of marriage and to the sanctity of the Eucharist.

St Paul tells us in his First Letter to the Corinthians that before we approach to receive the Body of Christ, we have to examine ourselves, or we eat our condemnation by receiving the Eucharist in an unworthy way. Now the confusion in the Church is going even further than that, because there is today confusion as to whether there are acts which are intrinsically evil and this, of course, is the foundation of the moral law. When this foundation begins to be questioned within the Church, then the whole order of human life and the order of the Church itself are endangered.

So there is a feeling that in today’s world that is based on secularism with a completely anthropocentric approach, by which we think we can create our own meaning of life and meaning of the family and so on, the Church itself seems to be confused. In that sense one may have the feeling that the Church gives the appearance of being unwilling to obey the mandates of Our Lord. Then perhaps we have arrived at the End Times.

In the end, my friend signed the Filial Correction; we still don’t know what the fall out will be for him.