What he says doesn’t matter. The one thing we’ve learned is that reality doesn’t interest him in the least.

_“‘The presence of God today is called Rohingya,’ the Pope said after speaking to an interfaith audience in Bangladesh.

“He did not use the term in public earlier in the week in Myanmar, to the dismay of campaigners for the Rohingya, whose stories of escaping violence in the country have provoked international condemnation.”

What does it mean? Frankly, it doesn’t matter. Meaning isn’t the point and never has been. It means Greg Burke was whispering in his ear that he was getting criticism for not saying the R-word in Burma. 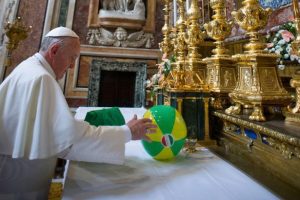 It means pretty much the same thing as this photo.

It’s intended to do one thing, the same thing that everything else he does is meant for.

To produce more or less this result.