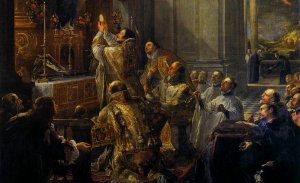 It was the conflict, the contradiction, that the FFIs tried to avoid, but that was finally forced on them: a choice between the New Catholic Paradigm so energetically promoted by Pope Francis and co., or the Faith of our fathers, and all its goals. In the 70s this incompatibility was perhaps not so clear. But it’s pretty clear now.

I’m just revisiting briefly the terrible, awful but extremely informative tale of the Franciscan Friars of the Immaculate. Not many have talked much about the money angle of course, with the ideological aspect of it being the main point of interest for believers. And its perfectly clear that the FFIs were attacked for their refusal to go along with the Novusordoist New Paradigm. But the money is pretty significant too, not least because the final tally amounts to nearly 30 million Euros. It’s worth looking into.

But getting back to the Hilary Thesis: that this pontificate is intended by God to “sift” and “winnow” the faithful, to force people finally to choose a side and get off the “conservative” fence, to stop trying to appear “moderate”. The word “moderate” is popular in our times. Newspaper reporters have only two political categories to talk about parties in Europe; you are either “centre” or “extreme,” with it being very obvious that these are substitutes for “good” and “evil”. Of course one never hears any reference to the “extreme left”. No, that epithet is only ever attached to the “right”. It’s barely OK (that is, they won’t call the cops) to be “centre-right”.

Naturally these terms are applied more or less arbitrarily, because, as we have learned, whether you are “centre” or “extreme” – as with being “conservative” or “liberal” – depends entirely upon who is standing next to you. We’ve been trained to unconsciously assume that “centrist” in politics and “moderate” in religion is the human ideal. That “moderate” = good. But the whole thing is smoke.

In our degenerate times, however, Catholics have failed to recognise this smoke and have unconsciously adopted these criteria, internalising them and applying them according to a completely made-up set of standards to everything they see. Thus, the Franciscan Friars Immaculate could be “extreme” or “rad-trad,” or “conservative” or “centre” or “moderate” all depending on which publication you are writing for.

Hot, not cold, and decidedly immoderate.

What Catholics never do in these degenerate times, is ask themselves how they are seen by Christ. But the Second Person of the Holy Trinity was fairly clear about how He feels about Catholics being “moderate”:

And unto the angel of the church of the Laodiceans write; These things saith the Amen, the faithful and true witness, the beginning of the creation of God;

Now it seems like a funny thing to be accusing the FFIs of being on the fence. They certainly have a great reputation for an evangelical Catholic orthodoxy, and for asceticism and fidelity to their charism. But look more closely. It was on the most important question of our times that they refused – programmatically refused – to decide. The same question that we are all now being forced to decide on.

My piece from a few months ago for the Remnant investigated the financial end of things, but this is right in the middle of it:

All sources say that it was fear of being labeled “traditionalist” in the theological sense – as opposed to merely having an aesthetic preference for the smells and bells – that Fr. Manelli most feared. They say that he was “at pains” to always be seen to celebrate both the old and the new rites, and that it was forbidden in the institute to say negative things about Vatican II. And I think, reading the Traccia, that Fr. Manelli’s discomfort with the New Paradigm of Vatican II, if it exists at all, must have been a later development. The Traccia is full of positive references to Pope Paul VI, not something one would be likely to find in a “crypto-lefebvrian” document. It is possible, I suppose, that their protestations of “acceptance” of the Council were genuine. Indeed, it is hard to imagine such a man dissimulating for political reasons.

It is well known, however, that in Italian ecclesial politics, merely being accused of any sympathy for or likeness to Archbishop Marcel Lefebvre is the equivalent of an accusation of communism by the HUAC committee. But the documentation shows that the FFIs were extremely careful never to criticise the Ordinary Form or any of the outcomes of Vatican II, had introduced the Old Rite incrementally and had never issued a blanket order for it in every house.

But stop a moment; what are you really doing when you’re hotly denying being a Traditionalist? What is the one thing that separates the Traditionalist Catholics from the merely conservative novusordoist Catholics? It’s not the Mass. It’s not a matter of preference for Latin, incense or any other external thing. It’s the Social Reign of Christ the King; the “conquest of all souls for God,” as Fr. Manelli’s Traccia put it. Traditionalist Catholics believe that it is the purpose of the Church, founded and mandated by Christ, to convert every single human being on earth to the Faith, and to have Catholic principles guiding every nation.

Now, what is the one thing that the Francis Vatican is most energetically doing lately?

You will see immediately the problem. It was the conflict, the contradiction, that the FFIs tried to avoid, but that was finally forced on them: a choice between the New Catholic Paradigm so energetically promoted by Pope Francis and co., or the Faith of our fathers, and all its goals. In the 70s this incompatibility was perhaps not so clear. But it’s pretty clear now.

It is, in fact, the choice that everyone is going to have to make at some point, because it seems clear that the Francis machine isn’t going to stop until everyone is either with them or out. And the fact that the FFIs were chosen, alone among all the communities of religious, to be made an example of, says a lot both about them and about all the other “conservative” communities that weren’t attacked.

It also indicates that the bold approach is not only more honest, but more effective. All the tiptoeing around on VaticanTwoist eggshells, the self-censoring, accommodating and attempts to walk that friendly, we’re-harmless, “conservative” middle way between the contemporary Church’s two competing proposals didn’t avail them much. So, lesson learned, hey? Be a traditionalist and don’t apologise. They’re going to hate you anyway, so you might as well go all in. Spring the trap before it gets you.

In short, it is the very act of sitting on the fence that raised them up to the level where they could be more easily targeted. They tried to hide in “moderation,” thinking it the same thing as prudence. But who are the “moderate” saints? Do we point to Thomas More, the calm and rational gentleman? Beheaded of his own free will. Do we like St. Francis de Sales, the saint of gentleness? Spent his life refuting heretics. There is nothing of moderation in our religion. Prudence, yes. But it is sometimes prudent to be martyred, which anyone would regard as extreme.

No incident of the Francidian pontificate more aptly proves my thesis than what happened to them, and what they did – or failed to do – to bring catastrophe upon themselves. What is the lesson of the FFIs? Decide freely now, one side or the other, because you will have the choice forced on you eventually. 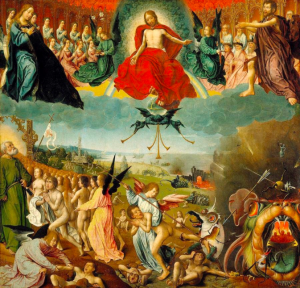 The day is coming. And this is the reason I am grateful to God for this monstrous pontificate; it is providing every Catholic with the opportunity to choose for Christ now, before that terrible moment when we will know it is too late. 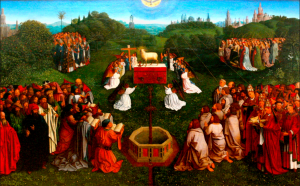 Our Most Gracious Majesty has, in His infinite mercy and patience, allowed us to choose between life and death, between, as He put it above, being “hot or cold”. But I would strongly suggest choosing the former. The immediate pains may be great, but the long term rewards are more glorious than any of us is capable of imagining.