Today we have a report from Tosatti, based on the anonymous blogger who claims inside sources (yes, this is actually how the “news” about the Vatican works) that Our Dear Leader has called a meeting of his media advisors to launch a campaign to discredit and smear the reputation of the three Kazakh bishops + 2 who dared to reiterate Catholic teaching in public and call for the pope to start doing his job. (Mercilessly forcing us all to learn how to spell “Kazakhstan.”)

Church Militant has helpfully done a helpful thing on it in English, putting together some of the early responses to the call to arms.

The report went on to summarize it as a “campaign of denigration” against the bishops, conducted through various media friendly to the Holy Father. The pope “has given carte blanche to his official and unofficial ‘press officers’ to start a ‘media campaign’ that denigrates opponents,” which will serve to “discredit” the bishops, causing them to “lose their credibility.”

Here’s Marco’s original in Italian. And here’s the money quote from his source, “Anonimi delle Croce.” (No, I have no idea who he is.)

My source in the Vatican told me that last night [Pope Francis] stayed in Santa Marta with several Vatican “press officers” and various “advisers” for a meeting on how to deal with this new and “unexpected” Correction from the Bishops of Astana. The source told me that [the pope] was furious. He went on a rampage — because he cannot stand any opposition. They heard him scream: “They will regret it! They will regret it bitterly!“

However we take these anonymous inside sources, certainly the picture of the paranoid pope, purple-faced and screaming for the heads of his enemies, is very much in keeping with what we already know about his character and governing methodology.

And wasn’t our friend Massimo hot off the mark! Well done him. 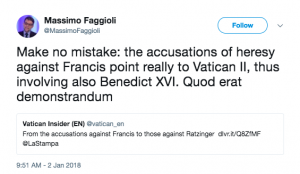 And coopting Benedict XVI into the discussion is clearly a mandated talking point. 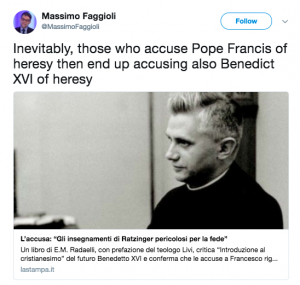 As we see here with Jesuit fellow traveller Thomas Reese

I can tell you from my professional experience that in many cases the actual story is more or less irrelevant, and that the entire point of posting something is to get the headline out there. The purpose is to create a psychological connection, mostly subconscious, in the minds of ordinary readers “People who don’t like Amoris Laetitia = ‘dissidents’.” Ironically perhaps, it is these very people – who spent decades opposing John Paul II, Cardinal Ratzinger/Pope Benedict on these very questions – who made the concept of the theological “dissident” part of daily Catholic discussion.

I think this one from Fr. Tom Reese SJ is especially entertaining since it was not really that long ago when the self-same Jesuit was called on the carpet and sacked from America magazine, the dissident Jesuit journal par excellence, because of his continual attacks on both Cardinal Ratzinger, as was, and perennial Catholic doctrine, especially on sexual morality…

I’m becoming rather warmly disposed to Massimo, however, since he ‘s been so helpful. Alert readers will recall that Massimo Faggioli – FrancisRegime’s resident Jack Russel Terrier – is the one who recently admitted that the Catholicism of the post-Conciliar era is radically different from – and even opposed to – the Catholicism of the previous 1965 years. That it is, in short, an entirely new religion. 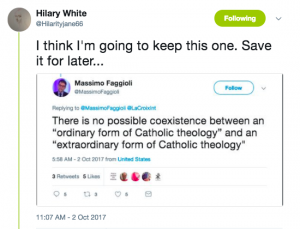 It does help, I find, when one’s ideological opponents helpfully make one’s point for one.  I should send him a Hershey’s Kiss or something for being so helpful. And it’s not like it’s something he only said once and then backed away from or avoided. No indeed; he brays it out to the Twittface world every chance he gets.

But it’s Max Beans who has really taken the talking points and run with them. 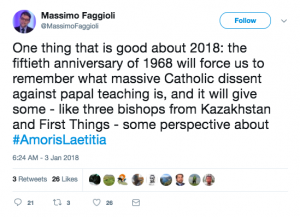 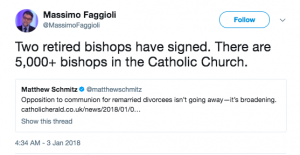 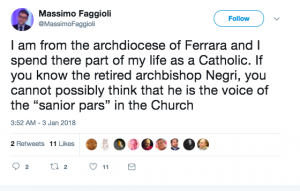 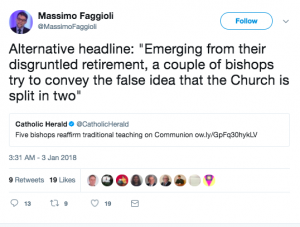 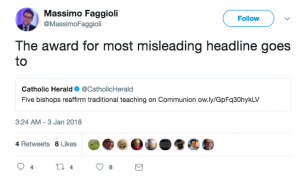 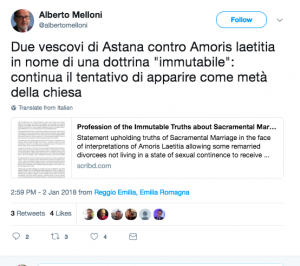 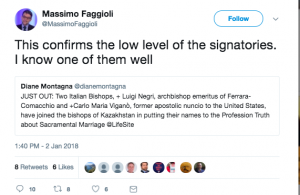 Not that it’s anything new. These are the ones who have been working night and day to try to create an equasion between orthodox Catholicism and “fundamentalism” (and every other insult they can think of) for some time now. Remember this article from La Civilta Cattolica? (It’s the Jesuit-run magazine, officially vetted by the Secretariat of State, whose editor is Antonio “2+2=5” Spadaro) Spadaro working to create the equation: “Hey, you know those retarded and probably evil ‘fundamentalist prods’? Yeah, well, ‘orthodox Catholics’ are just like those guys.” So it’s OK to be mean to them. No mercy for those guys, amirite?”

So, since this is pretty much what these people do, and have done for a long time, it’s debatable whether all this verifies the story from Anonimi delle Croce/Tosatti that there has been a direct papal mandate for these attacks. But the existence of a campaign, papally mandated or not, to discredit faithful Catholics opposing the now-obvious plan to undermine Catholic teaching on sexuality can’t really be convincingly refuted.

Meanwhile, out in the real world, it seems that people who haven’t had their wits addled by anti-rationalism and papal positivism seem to be catching on that there’s a little game being played. Mark Steyn has asked His Holiness what all this fiddling is about.

I don’t know if His Holiness ever gets into street clothes and leaves his impressively walled city-statelet to wander the streets of Rome, but, if he did, he would see, in Italy as in France as in Spain as in Germany, that Christendom is dying on his watch. In 2016 I attended (as the Pope did not) the funeral in Rouen Cathedral of Père Hamel, the eighty-five-year-old Catholic priest whose throat was slit during Mass by two Muslim men. The service, for all its protestations of unity and forgiveness, chilled me: I felt mostly the absence of faith, or at most its exhausted remnants. Père Hamel had shared, enthusiastically, his Holy Father’s illusions: In Saint-Étienne-du-Rouvray, he had given land next to his church to the local Muslim community to build a mosque. So no “closed” heart there. And he was repaid for his generosity with ritual decapitation.

Here’s our old buddy, the clear thinking Stephen Walford’s contribution to the campaign in La Stampa

Apparently someone told Walford to see how many times he could fit the word “dissenters” into each paragraph.

(Be careful. I’d turn off your irony detector before you read it. It might blow sky high and make a mess on the carpet.)