On a somewhat more serious note…

One of the biggest problems we in the anglo nations have understanding Bergoglio is that we have no equivalent to Peronism. Politics is about policy to us. In Argentina, politics is about the leader.

Fr. Ray Blake has a post up today that does a good job of giving people the key to this pontificate. Go read it. 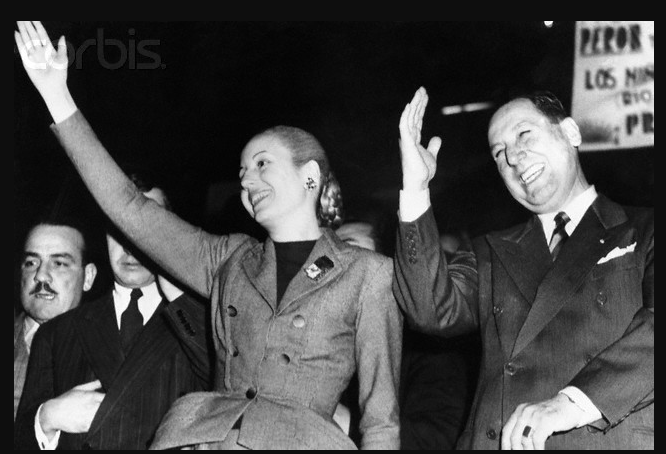 For those too lazy to click, here’s a bit of it:

I had a lesson in Peronism from an Argentinian waiter recently, in Argentina he was a PPE graduate.
Peronism, he said, was the most corrupt form of politics, because you could be a Communist, or a Facist, or a Capitalist, the only thing that mattered was support for Peron, [and] post Peron any other head of State. It is a remnant of 1920/30s Fascism, where the will of the Fuhrer or Il Duce was all that mattered. Right or Wrong, Good or Bad, Custom or Tradition, Law or Morality or anything else pale into insignificance and have no validity compared to the Will of the Leader.

I think I see where this is going…

To the Peronist the old elite, who based their authority on intellectual expertise or their understanding, or knowledge, even their fidelity to the law must be supplanted, nothing other than the leaders will matters. They represent an alternative authority, and therefore a possible alternative source of power, and certainly a source of evaluation and criticism. Peronism hates intellectuals.  They [Peronists] are always totally arbitary and concerned with what is expedient, what adds to or deepens the leaders power.

The trouble with Peronism as my waiter friend explained is that far from being a cure for corruption it becomes a source of it. The corruption in the Vatican is based on nepotism and patronage…

Peronism thrives on this because relations with the leader, rather than integrity, honour or honesty, are all that matters. It does indeed reduce everyone to slavery because personal integrity is always subject to whatever the leader wants. North Korea is perhaps the Peronist ideal or at least the reductio ad absurdum.

What is hated are upright men of integrity, those who are approved of are the servile and weak and those who are either stupid, indebted in some sense or lack integrity, who are therefore always and corruptible. One could list a huge number of Papal courtiers who fit into this category…

As the pseudonymous Marcantonio Colonna wrote in the book, “The Dictator Pope,”

“In fact his patronage of Monsignor Ricca fits the pattern which was well established when he was Archbishop of Buenos Aires, whereby he surrounds himself with morally weak people so as to have them under his thumb.”

So, today I got a message from someone asking about the situation in China. (China is on the article list for this weekend. I sort of feel like there will be a development maybe, so I’m letting it float for a day or two…).

I’ve been wondering, what’s Bejing handing over to Rome? There’s got to be an infernal exchange of filthy lucre on some level…

Demonologically speaking, the thing they hate the most is the validity of the sacraments, which they have always sought to extinguish… this would be the chance to virtually destroy whatever the Faith could be in China… think of the billions of souls lost… it’s like a treasure trove…

Here’s my take. (I’d like to add that this is speculation on my part, just the putting together of a lot of puzzle pieces until they show a more or less coherent picture.)

Oh… Nothing. The Vatican gets nothing. The Chinese Catholics certainly get less than nothing. That’s kind of the crux of the objections. The Vatican has conceded everything for exactly nothing in return. It’s all a vanity project for the Peronist in Chief. He gets to go to China on a papal trip, presumably, and be the first pope in history to tame China.

This is what we have to understand about Bergoglio. He doesn’t care about Novusordoism because that would require that he care about the Church of has some kind of vision or intentions about it, qua the Church. Bergoglio cares about Bergoglio and Bergoglio’s personal aggrandisement. That’s the lens you have to hold up to understand what he says and does. So, he doesn’t give two figs for what the Chinese Catholics/Patriots do in their churches.

This is really important to understand about him. Everything we worry about, liturgy, moral teaching etc, are tools to him. Everything and everyone, every situation, every trend, are all means to ends, and the end is Berogoglio. Bergoglio is about Bergoglio, and nothing else. If he thinks about Trads at all, he thinks only about whether they are for or against him. At the moment, we’re against him so he’s against us. [Which is why, btw, he had no problem with the SSPX in Argie. They were pals because they weren’t in his way at that moment.]

It seems he has a personal taste for what the English might call “low church” liturgy. He likes the dancing and puppets, but he’s also into “folk devotions”. But that’s like saying Hitler had a personal taste for a particular kind of cheese. It has nothing at all to do with – and has no effect on – what he does as pope.

Fr. Blake has a very good article about it last night. I think one of the best that’s been offered yet.

Everything the libs think Bergoglio’s about – immigrants, women, the environment – are all tools to him. He knows those issues are the way to gain the greatest number of followers. And it’s not “support” he’s after for any political programme. There is no programme. He wants followers in the sense that a guru seeks them. Not to legitimise what he is doing or wants to do, but purely to consolidate power and exalt himself.

This is THE most important thing to understand about Bergoglio. He doesn’t care about any of it. Every single word that pops out of his mouth is a lie. Which is why he doesn’t bother his wee head about contradicting himself constantly. He’s completely Maoist in that respect. We have seen that he does not consider words as a means of conveying meaning. He adhere’s to Mao’s doctrine that words are entirely used for emotional manipulation; words are “little sticks of dynamite in men’s heads”. You put them in there in order to trigger emotive responses, so you can make them riot or join the Red Army or go live in a collective farm.

Anyway, read that post from Fr. Blake. He really hits it out of the park.

This is also, btw, why nothing ever moves him other than newspaper headlines. The reason we got that carefully worded and orchestrated (Oh yeah… O’Malley just happened to be the guy to issue the “rebuke” to the pope over the “calumny” comment… sure…) “apology” in Chile. Keep this lens in front of your eyes while you look at him, and you’ll start to get it.