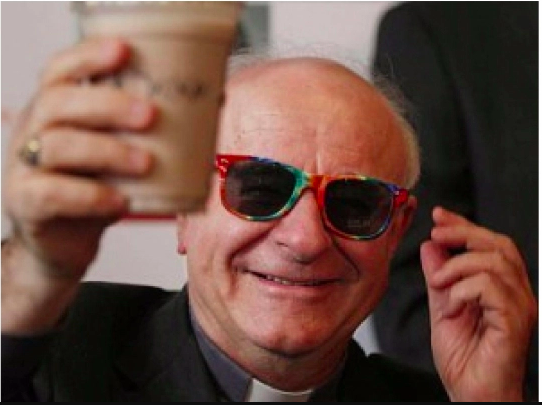 So, the pope is on again today about “contemporary man” and his friend Vincenzo Paglia – remember, the guy who commissioned a painting for Terni cathedral from a homosexual that included a depiction of himself naked – except for the zucchetto – in some kind of weird apocalyptic orgy… I don’t even know. Anyway, Buddy Vincenzo is now in charge of BOTh the Pontifical Academy for Life AND what used to be the John Paul Institute for Marriage and Family (that was one of the ONLy voices in the Catholic world unambiguously opposed to Bergoglio’s plans at the Synods) and one of the latest little projects is to revisit Gaudium et Spes.

Oh, you don’t remember Gaudium et Spes? If you’re under 50 I guess you wouldn’t. It was the Vatican II document – one of the ones labelled “pastoral” so that no one has any idea of it’s “level of authority” – that talked about how GREAT the “MODERN WORLD!” was going to be for “MODERN MAN!” and how all the “MODERN THINGS!” were all set to become the BEST THINGS EVAH! Because in those days everyone talked in Broadway Musical headlines. But it was going to be GREAT!

Yeah, well, then the rest of the 20th century happened, and the hippies, commies and dupes who thought Gaudium et Spes was a blueprint for a New Age of Enlightened Wonderfulness are now mostly laughed at by a generation of people who grew up without parents or siblings, career prospects, hope of ever owning a home or ever having any kind of stability, no moral centre and no idea what life was for.

So, thanks feckin’ hippies, but can you just please hurry up and finish dying off? That’d be great, thanks.

The new academic Chair was established as part of the Pontifical Institute, itself a new foundation, brought into being in September of last year with the motu proprio “Summa familiae cura.”

The Inauguration of the Gaudium et spes Chair was marked by a Pontifical Letter from Pope Francis, which was published by Archbishop Vincenzo Paglia, the President of the Pontifical Academy for Life, and Grand Chancellor of the Institute.

In his letter, Pope Francis expressed his appreciation for the work of the Institute and his hopes and best wishes for the new Chair. He noted that Gaudium et spes was promulgated on the final day of the Second Vatican Council, and was, he said, “able to express and give form to the profound intentions that guided the calling and unfolding of the Council.”

Yeah… how’d that work out, eh?

Anyway, since it’s early in the year, we’re still collecting the papal conkers he’s throwing let us know what’s coming in the Great and Glorious Fifth Year of the Pontificate of Mercy, and apparently “modern man” and “contemporary man” is the latest to be chucked at our heads.

One of my contacts Inside texted me this morning:

“Modern man” is the word of the day, apparently.

Yeah, PF is on about him this morning.

Ugh…These people really are just trapped in the 1968 amber. What boring little minds they all have.

Well, “minds” is being very generous. I mean, at least the hippies had the excuse of having used mind-altering drugs.

Oh yeah, morale is high in the curia all right…

“Ah yes, the Clerical Woodstock That Never Ends. The ‘Modern man’ that over-celebrated essay was talking to died in 1968 and his grandchildren are insane. It’s like watching a cargo cult try to conduct a seance.”

Anyway, here’s something fun to do while we’re waiting for the Asteroid. It’s a sort of journalist game to play with Vatican documents, (or anything that claims to be Catholic on the innernet, in fact.) I used to do this as a way of breaking the mental ice when I was figuring out how to start an article. “Hmmm…” I would think. “I wonder what a quickie word-search would turn up on this one.”

It’s pretty simple; you just take a document, like … oh I don’t know… just for fun let’s use “Gaudium et spes” and you do a keyword search. Open the link and go “cmd-F” and the word search window opens and tells you how many times the word appears in the document.

Go ahead. Try it. It’s fun, in a mirthless, dark and despairing sort of way.