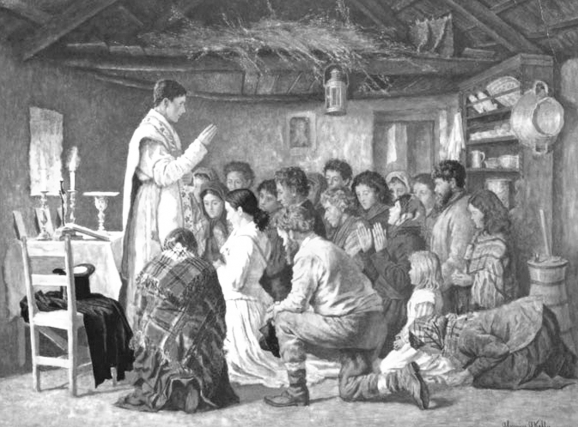 Continuing on with our little collection of responses to my question, “What do we do?” an interesting response comes via the WUWTS FB page.

“Every good Catholic should read this. The answers needed are in this. This is my plan. I’m ready. I’ve been studying and receiving the Sacraments. I’ve been learning to pray without ceasing. The contents of this article will carry me through. It is a priest caring for the few faithful during the French Revolution. God willing, we will become saints.”

This is what I’m talking about. I’ve had people on Twittface responding to this question with just more shrieking and howling about “those guys in Rome!!!” Yeah, OK. Thanks. We’ve identified the problem. Maybe we could move on to the solution. I don’t have any power to depose a pope, do you? Right. So let’s talk about what we can do.

For many, many people in the Catholic world, this is the situation as it is now. And as it has been for a long time. The reality for Catholics we have had to call “traditionalists” has been this in many cases since the Council; but that reality is now spreading outward into the rest of the “mainstream” (for want of a better term) Church. More and more people are coming to understand that they cannot follow where this pope is leading.

Again and again in modern history the story is played out; the clandestine priests of the Communist period hearing confessions, saying Mass, teaching catechism while holding down factory jobs; the heroic escapades of a Fr. Miguel Pro, disguising himself as the dustman to evade capture; the wit and courage of Edmund Campion… the list can go on and on. These priests and the laymen who helped them are rightly held up as heroes. But in between the stories, in the time of priest holes and Mass rocks, what did people – ordinary Catholics – do in such situations to keep the Faith in their day to day lives? In times when the normal Catholic life is not available, what do you do?

For an answer to these questions, Lynn gives us a link to a very interesting document that I had never come across before. It was written by a French priest in 1801, a time when priests were still under heavy persecution in many places in Europe, a situation that didn’t really improve much through the 19th century, (when many, many ancient monastic houses were also forcibly closed by secularist anti-Catholic governments as “useless”.)

During the French Revolution very many Bishops and priests were martyred for their faith as were many outstanding laymen also martyred. Church property was seized by the Masonic government. That left the people without their priests and without a place to go to Mass and receive the sacraments. It was during that period that a Father Demaris wrote the following letter to the concerned Catholics of his day. At the present time (the year 2018), the Church is in a situation which is EXACTLY parallel to the time of Fr. Demaris. If he were writing this letter today, he would in all probability write exactly the same words. Hence, Fr. Demaris’ letter is given below in its entirety. Read it with an eye to history and an eye to the present. May it bring you courage and consolation.

Letter from Fr. Demaris to Catholics
Who Have Been Deprived of a Priest

3. You are frightened, my children, at what you see: all that you hear is frightening, but be consoled that it is the will of God being accomplished. Your days are numbered. His Providence watches over us.

4. Cherish those men who appear to you as savages. They are the means which Heaven uses in its plans, and like a tempestuous sea, they will not pass the prescribed line against the countering and menacing waves. The stormy turbulence of revolution which strikes right and left, and the sounds which alarm you are the threats of Herod. Let it not deter you from good works, nor change your trust, nor wither the shower of virtues which tie you to Jesus Christ. He is your model, The threats of Herod do not change the course of his destiny.

5. I know you can be deprived of your freedom that one can even seek to kill you. I would say to them what St. Peter said to the first faithful, What pleases God is that with a view to pleasing Him, we should endure all the pain and suffering given to us unjustly. What glory would you have if it were for your sins you endured maltreatment? But if in doing good, you suffer with patience that is pleasing to God. For this is why you have been called, since Jesus Christ has suffered for us, leaving you an example to follow … He, who had committed no sin; Whose mouth no wrong had spoken: When heaped with curses gave none in return; when ill-treated made no threats, but gave Himself into the hands of one who judged Him unjustly.” (1 Peter 2: 19-23).

6. The disciples of Jesus Christ in their fidelity to God are faithful to their country and full of submission and respect for all authority – adoring the will of God, they must not coward-like flee persecution. When one loves the Cross, one is fearless to kiss it and even enjoy death. It is necessary for our intimate union with Jesus Christ. It could happen any instant but it is not always so meritorious or glorious. If God does not call you to it, you shall be like those illustrious confessors of who St. Cyprian said, That without dying by the executioner, they have gained the merits of martyrdom, because they were prepared for it.

It’s pretty long. And it’s certainly worth the time and effort to read the rest…