So, now people are all upset that Vigano didn’t really get the sack.

Father Zed writes about it moderately huffily. Though I see that even he can’t get himself a full head of steam on this. 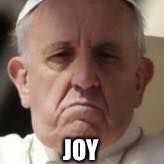 The face of a man who Does. Not. Care. what we think.

See, they don’t think the way we do. In their eyes, Vigano didn’t “screw up” at all. He made a clever decision to help the pope and we bloggers and news people – always sticking our noses where they don’t belong – screwed it up for him. They only think of themselves as the victims of unjust bothering by gnats and unimportant people who keep getting in the way of their great plans. It TOTally would have worked, too, if it hadn’t been for us meddling kids.

To us Vigano’s a liar and – possibly worse – clownishly incompetent. But to them, these things are irrelevant to the point of invisibility. To them, he’s the guy who got Wim Wenders to make a movie about the pope, and was re-branding the public image of the Vatican in the minds of the People Who Count from being a bunch of nay-saying fuddie-duddies into being a Big Important Player in the Cool Kids Club. They’ve got international fashionistas, movie stars and heads of state coming to hang out. They’ve got innovative high-tech art-projections of World Wildlife Fund things zapped in a cool high-tech way on the facade of St. Peters!

But what really happened? Once again, not quite what we might assume. It’s probably a good idea to remember that the ideological lens we tend to use when looking at the Vatican – looking for signs of the Catholic Culture War under every stone – is not in fact the only interpretive mechanism, let’s say. I was speaking to some of the people I know inside, and they have a slightly more nuanced view of this “re-hire”. I’m told it’s true, yes, Vigano is “definitely being protected”. He’s the pope’s man. But in fact this business is a huge setback both for him professionally and for the larger re-boot plans. It’s extremely rare that a Dicastery head gets publicly forced from office because of this kind of scandal.

(I can think of only one example in the last 10 years, and that was Abp. Fisichella who was forced out of the Pontifical Academy for Life for publicly supporting abortion. But let’s not forget that it took two years of struggle, intervention by the prefect of CDF and a direct order from the pope – AND then he was given a sinecure as a reward that later Francis picked up and made into one of his little projects. Fisichella is the ideal man for Francis’ habit of surrounding himself with the compromised. And I can’t imagine it was an accident that it was Fisichella who was given the job of telling the world at a press conference about the dissolution of the PAV. Payback’s a b…)

Anyway the inside skinny is that this “re-hire” of Vigano is actually a face-saving measure – the pope really can’t be seen to be bowing to public pressure, ESPECially not since it comes from the likes of Steve Skojec, Edward Pentin, Catholic News Agency, Father Zed… et al. But at the same time, it’s unlikely he will have any real power. If Francis sticks with his usual methods, Vigano won’t be down long. He’s been quite useful, and I’m sure he will continue to be useful.

And it could actually work out, in a tiny and more or less totally insignificant way, to be a good thing. Given his toxic reputation – a combination of a bull in a china shop, blundering around knocking the valuables onto the floor, and a peevish micro-manager sticking his nose into every detail. Vigano, by all reports, is a man whose management style fits nicely with that of Bergoglio., so he’s not going to be sidelined for long.  And a man like this pope can’t allow himself to be seen to be defeated by a bunch of nobodies, not even on something trivial, particularly given the strong show he has made of being totally unaffected by us pipsqueaks.

But the take-away for now is this: Vigano was, up til yesterday, like a CEO with absolute power over every aspect of the communications departments. Then he was forced to resign, and given a meaningless title, like VP, with no real power. He’s being protected, certainly. But he hasn’t exactly been re-hired. This is more a face-saving move, to reward him for taking one for the team. He’ll no doubt re-surface, but not with communications. Probably with something better, and more high-profile, if the pattern is to be trusted.

But there’s one really, really important rule to keep in mind. It’s an old trick of Parliamentary politics to stir up a scandal over something trivial – and trust me, this whole thing is so trivial it’s almost painful to be wasting my time typing about it – in order to create smoke to cover something important. It’s an old rule: when everyone is shouting and hollering over something that makes no actual difference to anything, go read Hansard; find out what those bastards in the House of Commons are slipping through a vote while the cameras are pointed elsewhere.