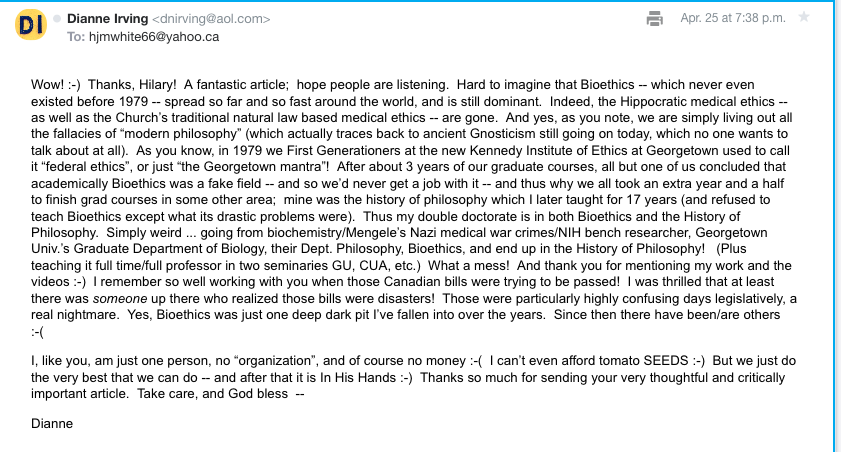 Posted with permission, this is the quick note I got from Dianne in response to my piece the other day. Mostly, she’s the one from whom I learned that our current difficulties and controversies emphatically do not date from the 1960s. She cites Gnosticism – the heresy that will never die because it is based on the infinitely expandable human ego – but I have also read about the corrosive effect of 13th century Nominalism, a poisoned present from William of Ockham, on Scholasticism. 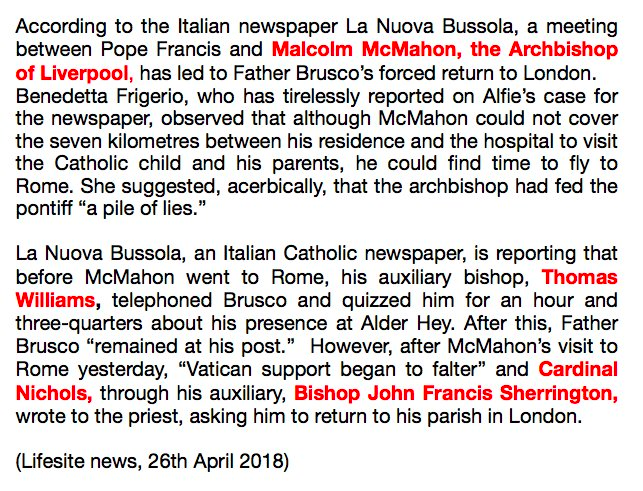 It seems clear there is a pricetag attached to pastoral care from the Catholic Church of England and Wales (thinking about your chances of a seat in the House of Lords, perhaps?)…

“We’ll support you, whatever decision we make…”

The Archbishop of Liverpool goes to Rome to reassure the Pope about the bravery of the doctors of the Alder Hey Hospital and the correctness of the British judges who sentenced to death Alfie Evans; and in the meantime he drives away Gabriele Brusco from the hospital, leaving Tom and Kate without any spiritual assistance and concrete testimony of human closeness.

The Evans family will receive all the smiles and hugs they could want the instant they agree to play along nicely, like good little soldiers, with their own son’s death pathway. “Just submit… Then we can all be friends…”

An Alder Hey doctor has apparently said that the whole problem has been the “bad attitude” of Alfie’s parents, Tom and Kate. Indeed. “How dare they question us and our decisions?” seems to have been the entire working principle here.

A report from The Telegraph indicates the hospital staff is not interested in what’s best for Alfie, so much as proving a point to the parents, who have an “attitude” they don’t like. Here’s the revealing bit, buried in the Telegraph report:

Instead, the judge said the best Alfie’s parents could hope for was to “explore” the options of removing him from intensive care either to a ward, a hospice or his home.

But a doctor treating Alfie, who cannot be named for legal reasons, said that for Alfie to be allowed home would require a “sea change” in attitude from the child’s family, and they feared that in the “worst case” they would try to take the boy abroad.

And the Bishops of England and Wales could not agree more. The Church and the State would get along so well if it weren’t for these uppity Scouser lowlifes! (Class-hatred is as big an issue in UK as race is in the US. Mostly it’s distinguished by accent. Use the wrong kind of vowels, and you’ll be treated like Alder Hey, the bishops and the judge have treated the Evanses.)

Tom Evans to the press yesterday – the first time he has spoken in these terms and tones, and the first time he has spoken to the press by reading from a prepared statement instead of in his own words. It’s difficult not to put these dots next to each other to ask, “What did they threaten him with to force this?” What did they promise him? I’m not the only one calling it a “hostage statement.”

La Nuova Bussola suggests that Father Gabriele will eventually be banished from England and sent to mission territory. It observes that the Archbishop of Liverpool has guaranteed chaplaincy support to the family but asks who is willing to believe someone who does nothing but tell lies.

McMahon has startled Alfie’s supporters in Liverpool, further afield in England and beyond by siding squarely with Alder Hey hospital.

And finally, Buddy-Skodge asks, “Could the Alfie thing happen here?”

Srsly… What part of “Hippocratic ‘do no harm’ ethics is dead” did I fail to clarify? The protocols that are at work right now in Liverpool have been at work for 20 years. Helpless patients are _routinely “_deep sedated” and dehydrated to death in hospitals across the western world.

We are watching one of the milestones in the descent of Western Civilization into madness play out before our very eyes, and despite the massive worldwide attention, nothing seems capable of staying the hand of evil. Court arguments have been tried and failed; appeals have been exhausted. International medical professionals and ethicists have weighed in. Diplomatic efforts have been attempted.

But Alder Hey Hospital and the British government are determined to kill a helpless toddler rather than let his parents take him somewhere people actually want to treat him and give him the ongoing care he deserves as he lives out the rest of what will be, barring some miracle, his far-too-short life.