It would be easy to quit. It would be easy to get a job writing for a Catholic news service, doing nice easy non-controversial stories about the pope visiting various countries and handing out gelato to the homeless. (I’d probably have to spend the rest of my life writing under a pseudonym…)

But there’s this thing going on that I can’t seem to leave alone. It’s been a long time now, and I just can’t stop watching the train coming at us, for some reason.

There are going to be a lot of people talking about it all. There’s a lot more to be said about Pope Francis’s Tweets, and about the nature of the relationship between the UK bishops and Rome. The story of the Liverpool bishop going to Rome to put the pope off the Alfie case isn’t over.

Meanwhile, a couple of things catch our attention…

There are still men.

Tom Evans surprised us all. A man. A real man. And amazingly, he’s just 21.

To a generation often depicted as a bunch of whining, posing slackers: you have been vindicated. And most especially to the young men of the Millennial generation — so often slandered as porn-addicted, self-indulgent and without honor:  a real life hero, far better and nobler than any Anime or video game fantasy, has arisen.

A teenager when he learned of his girlfriend’s pregnancy, Tom did not send her to an abortion clinic. Instead, he stood by her, and when their 8 month old Alfie fell ill, he did what every good dad would do — he stood by his son.

Now, Tom is a working class guy in an England where the ‘Labour’ Party once championed the rights of the working classes. It was Labour, after all, which brought in the National Health Service in the 1940’s as the crown jewel in their working class victory; after losing their sons to two pitiless world wars, England’s working men and women would have their government-paid health care.

Today, Tom’s baby son has been targeted by a new kind of Labour Party — and their Conservative counterparts — who want him to sit down and shut up, and accept the ‘reality’ that Alfie has to die in the dubious care of the NHS their grandfathers fought for.

Tom, Christ-like, has been made a public spectacle. For pleading for basic care for his son, he’s been threatened by lawyers, vilified in the national press, clucked over by the nation’s chattering classes and abandoned by the high priests.

‘Poor Tom‘, the professional chatterers say, and the unspoken is palpable:

‘Just a chav who won’t accept his lot in life.‘

They finally broke that poor, brave young man, and whatever they promised him, or threatened him with, at the very least the world saw what real fatherhood looked like. Seriously, apart from my own cousins, Danny and Mark, and my Uncle Mike, I didn’t think there was that much testosterone left in the entire country.

Matt Archbold, brother of sometime WUWTS contributor Pat, talked a bit for the Register about that aspect of it too:

One of the most haunting sights I’ve seen in a long time was Tom Evans, the father of Alfie Evans, coming out to the street in front of Alder hey hospital and robotically reading words on a page asking those who support his efforts to save his son, to stop, go home and live their lives. What sticks with me are his hollowed eyes. The way he simply read the words and failed to make eye contact with all around him. It sounded like a letter read by a hostage. This, coming from a man who has inspired thousands in the way he has defended his son’s life…

This is the plight of the modern man facing the secular state behemoth. It was a desperate and beautiful act of love in the hopes that the oppressive heel of the state would ease slightly off his child’s throat.

There are still priests 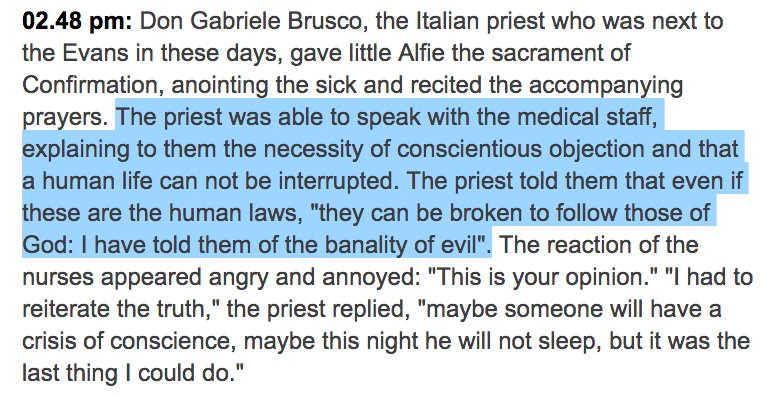 I can well imagine that no one at Alder Hey had ever had anyone from EngBishCorp speak to them like that in all their lives. “Pastoral accompaniment” indeed!

Everything about what happened to Alfie, Tom and Kate – including the incredible deluge of hatred for them from Britain’s ever-lingering class-war pouring out in smug, sneering contempt on Twitter – was exactly the reason I got out of pro-life activism. We saw it coming 20 years ago. I was going to let this one go by, knowing the steps of the Eugenics Tango only too well, knowing there was only one possible outcome once The Machine had hold of that child.  And knowing exactly how this was going to end didn’t make it one tiny iota less awful to watch. And one of the worst things about it all was seeing people who simply had no idea what was really happening, or why, talking utter, utter ROT on Twittface.

I suppose you can’t help the urge to try to tell people the things you know, but the hopeless futility of it all… It’s why I call it Cassandra Syndrome; what did I learn in that time? That you just can’t tell people things. They have to find everything out the hard way… or not at all. I can’t believe that back in the day – back in my naive and innocent 30s – I really thought it was possible just to tell people something and have them understand it. I got into the pro-life movement assuming that was all there was to it. You just had to point out to people that they had been misinformed, and the natural human impulse to love the Truth would win. Natural Law and all that… I guess that’s why I’m still writing, and not just happily painting for a living.

But oh man, the temptation to stop is strong…There’s something that lives in the back of my brain all the time, and gets very loud on days like this, that says, “This is basically your fault. You participate in this every day. You’re part of the problem. There’s only one possible response to evil of this magnitude.You need to go live in a hut in the mountains, never talk again, and do nothing but pray and fast…”

After 9-11 I actually tried this. I packed up and gave away nearly everything I owned, and went to live in a (weird, “New Movement” quasi)monastic community for three months. That was when I had to choose between pursuing contemplative religious life and activism. It was a hell of a struggle – I was 36 and there was still a mountain of stuff I didn’t know that was all to come later – and I’ve never been convinced I made the right choice.

But at least after I chose activism and move to Toronto, I really started learning. I carried on reading, and going to conferences, talking to people. It was as though I’d had a camera focused on the six square inches right in front of my feet, that was suddenly pulled back to reveal a vast panorama of horror. It wasn’t just us. It was the whole world.

It says in the Big Thick Book that if you know something that other people need to know to save themselves, you’re obliged by that knowledge to try to share it. To try to tell them what you know to warn them. If you don’t try, then it really is your fault.

The word of the Lord came to me: “Son of man, speak to your people and say to them: ‘When I bring the sword against a land, and the people of the land choose one of their men and make him their watchman, and he sees the sword coming against the land and blows the trumpet to warn the people, then if anyone hears the trumpet but does not heed the warning and the sword comes and takes their life, their blood will be on their own head. Since they heard the sound of the trumpet but did not heed the warning, their blood will be on their own head. If they had heeded the warning, they would have saved themselves. But if the watchman sees the sword coming and does not blow the trumpet to warn the people and the sword comes and takes someone’s life, that person’s life will be taken because of their sin, but I will hold the watchman accountable for their blood.’

More plainly, if you see the train coming and the children playing on the tracks…

Who could quit after watching that awful video of an obviously exhausted and defeated Tom Evans reading that appalling hostage note? I was up to the city yesterday afternoon. Took a walk around the touristy centro, leaned on the stone parapet at the very top of the mountain and out toward Assisi and thought, “None of these people knows.” I went to the Duomo’s adoration chapel to pour it all out, then to the Mass. None of it made me “feel” better, but that’s irrelevant. Looking at the haunted eyes of Tom Evans, it’s clear that feelings aren’t what’s important here.

As one of the generous supporters of this blog included a brief and to-the-point note yesterday:

Of course we carry on. What else is there to do?

We’ve almost reached the budget goal, so my thanks go out again to all who have donated. It wouldn’t be possible to carry on without your help.

If you haven’t already, and have found some of this useful, please consider making a donation: