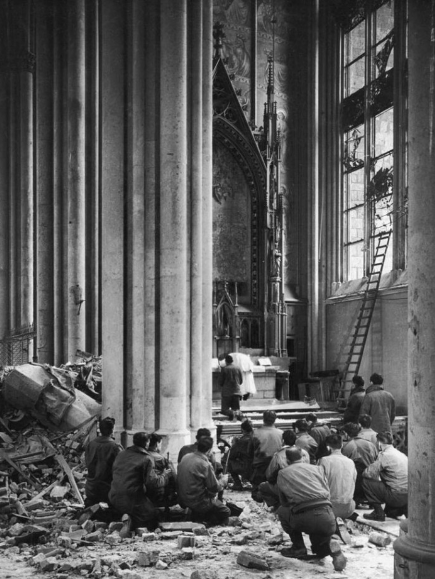 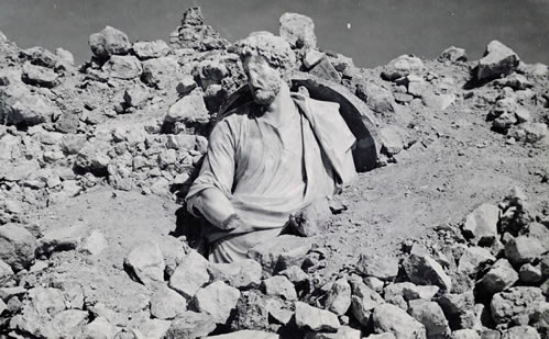 Monte Cassino after the bombing.

Everyone who tries, even a little bit, to live a liturgically-ordered life, especially anyone who tries to make a habit of saying the Divine Office, in whole or in part, will know just how incredibly screwed up everything is. Trying to keep up a regular life, that is, a life organised around the liturgical year, is like picking through the rubble left behind by bombing raids, trying to piece together a gigantic jigsaw of smashed stained glass and masonry. If you are familiar with the ground, either by memory of what was there before, or by careful study of old maps, you can usually get the general gist of where and what everything once was. We are like people standing in a bombed-out church using our imagination and memory to mentally reconstruct it enough to live and worship in it.

I think people are pretty resilient. My Uncle Mike told me stories of how he learned to fix bicycles. He and my mother grew up in in Manchester after the War. He said when he was a kid he used to pick through the bombed out buildings to find bits and pieces of old bikes and would take these home and piece together working bicycles for himself and his friends. You do what you have to do. As Mike would say, you stay calm and get it sorted.

In many ways, the post-conciliar Catholic Church is like a post-apocalypse movie in which gangs of the men, successors of those who brought the catastrophe on us, are still roaming around looking for things to destroy. But they’re the last. The pitiful, mutated and half-deranged survivors of their own holocaust, gibbering insanely in their last days, doing as much damage as they can before it’s over. They’re going to be gone soon, and we waste our energies wondering why they have done what they have done, what demon might have possessed them and their predecessors. It’s done. There’s work to do. 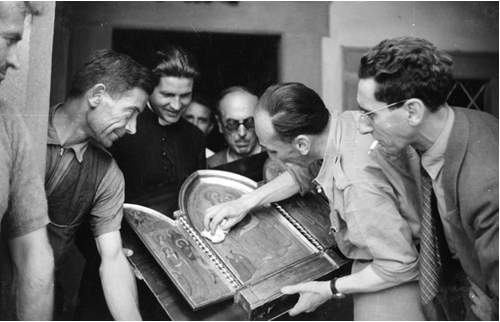 Meanwhile, there are still normal people who love beautiful things, truth and reality, who are looking for the remaining pieces, to preserve and rescue them, and even hide them away while the danger remains.

Imagine being the first professional archivist to walk into this room. You look at the pile of ancient precious pages, and you know exactly what you will be doing with the rest of your professional life. I think vocations in times of crisis are a lot like this. Once you find a work that must be done, you just do it because there is often no one else to do it and it has to be done.

It is sometimes painstaking work, picking through what remains, leaf by leaf, preserving every scrap we can find, piecing it all back together. It’s true that it was all brought low by wicked men, but there’s nothing we can do about that, fifty years on. That was the work of our parents and grandparents. Our job is to preserve the things we can find.

There are little bits and pieces lying around that have miraculously survived the bombing. As Mike was when he was a kid, we are technically forbidden to climb around in the ruins looking for stuff to save, but we do it anyway, even under cover of darkness if we have to, because who wouldn’t, right? We all know that after the bombing it will really never be the same again. The continuity has been interrupted. 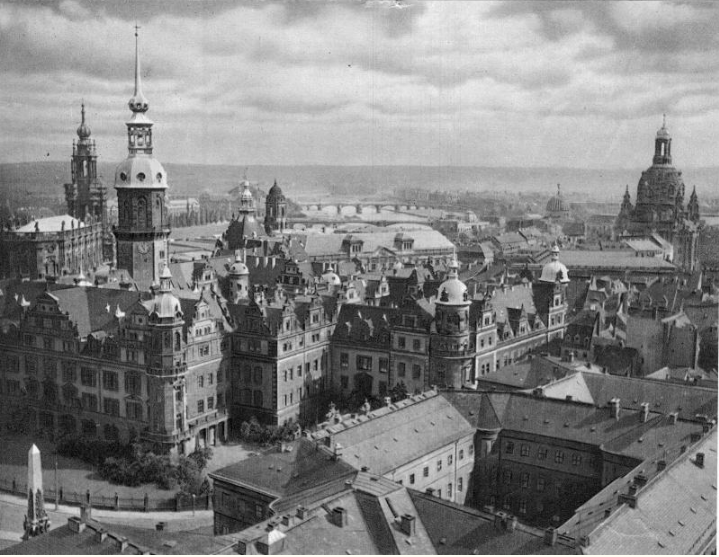 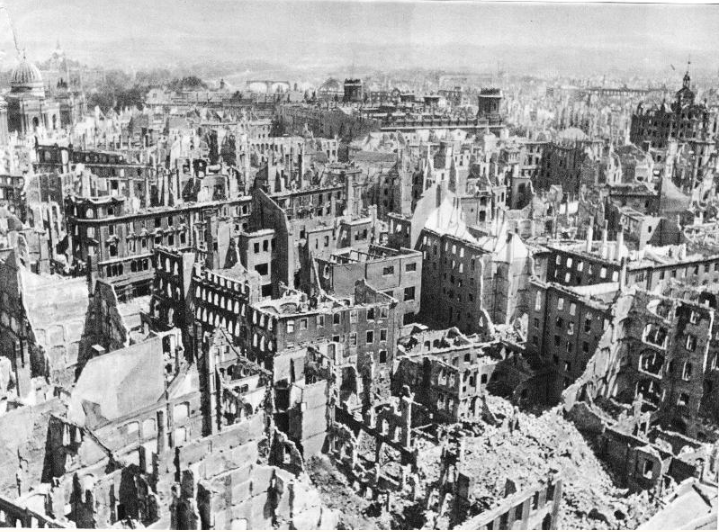 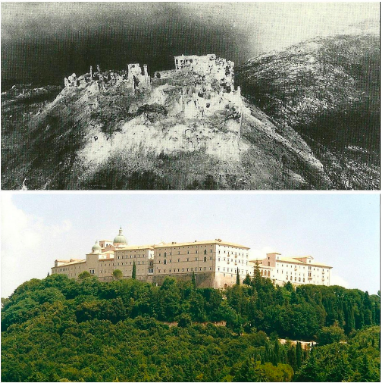 But it is possible to rebuild things, pretty damned close to what they were…

…if we can wrest it all from the people with Bright Ideas, that is… 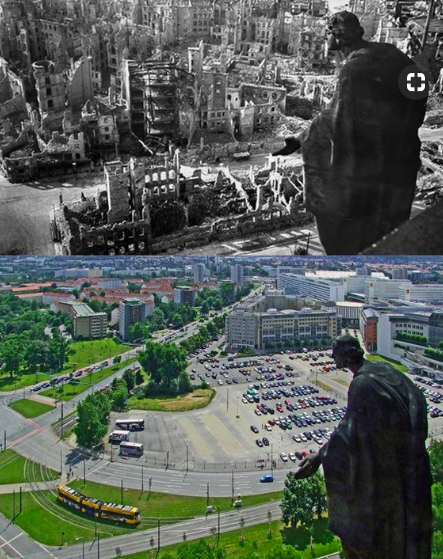 “Urban planners wanted a new look for Dresden, deciding to rebuild only some of its historic buildings. (The Frauenkirche church, arguably the city’s centerpiece, didn’t get completely rebuilt until some 60 years after the war.) The rest of the city center and much of the suburbs were cleared for more modern architecture that reflected a Communist era, with prefabricated slabs…”

Meanwhile, all that is for the future. Right now we’re in a different phase; we’re at the stage of collecting things and hiding them away from the iconoclasts, the thugs and wreckers and thieves who are still out there and want to destroy it all. I realise that five or so years ago we thought we’d seen the last of them, and that they’re gruesomely, horrifyingly resurgent now. But this really is their last gasp. Meanwhile… work to do.

Yesterday I went with a friend up to Perugia centro for the Mass. The Mass is offered on Saturdays at five but we had gone up a little early so we could go to the museum to see some Gothic art.

It was the feast of the Precious Blood.

What we didn’t know was that it was also this day. 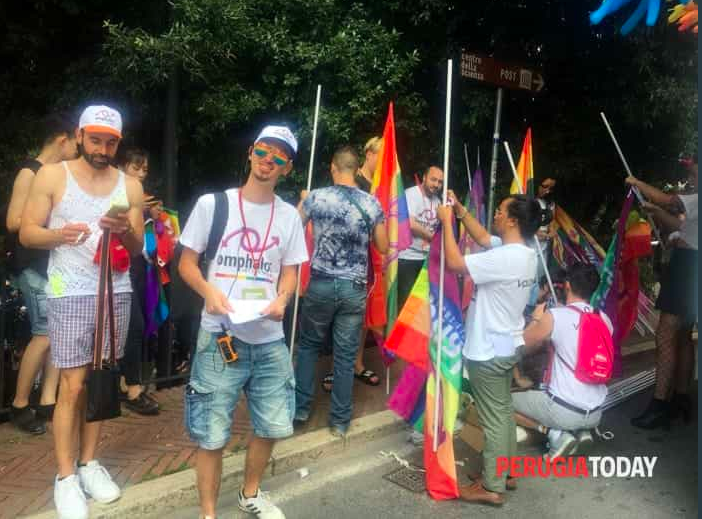 But, thank God, we didn’t notice this until we’d seen the art and gone to Mass. 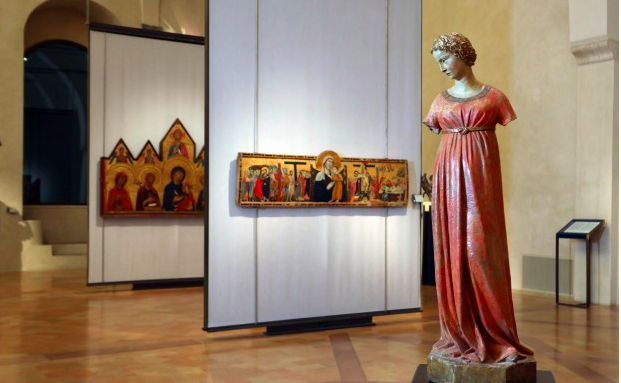 In the Perugia museum, in the glorious 14th century Palazzo dei Priori, the very first thing we saw was this.

I nearly burst into tears. She was the great gothic treasure of the Museo della Castellino in Norcia. The Annunciata of Norcia, by Jacopo della Quercia. I spent many, many hours sitting on a little chair in front of her gazing up and memorizing and drawing her. She was picked out of the Norcia catastrophe by the firemen, and came to Perugia through the intervention of the Lion’s Club, where most of the other art was looted removed down to the Bishop’s private collection museum in Spoleto…

The Gothic collection in the Perugia museum is spectacular. And it included a great many crucifixes like this… 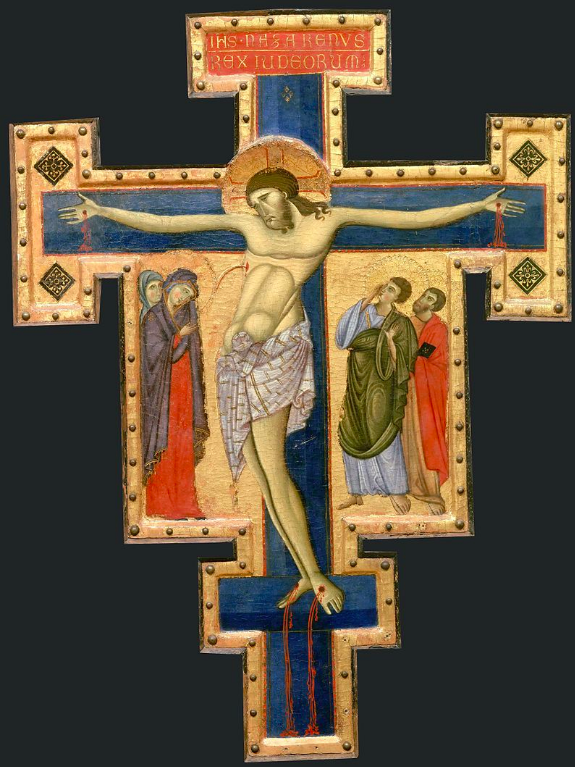 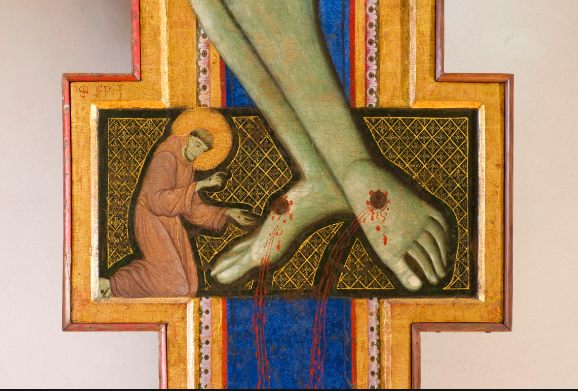 I had a sort of insight about the difference between the Gothic and the Baroque, in the context of the Feast of the Precious Blood…

Gothic art was for mystical contemplation. Baroque was for showing off technical painting skills of the artist. (I’ll write about this later.)

I think a lot of people sort of think of Gothic art, especially in Italy, as nothing more than a kind of half-way point between Byzantine and the Renaissance. I think we think of Gothic art as a sort of imperfect, un-developed proto-renaissance. But live in Umbria for a while and go see the churches here. I have started to think of the Renaissance as a corruption of the purity of Gothic art. The former was the start of the long march of secularisation that ended in the horrors of the modern period; the latter was the peak, the pinnacle of specifically Catholic devotional art that both taught and naturally inspired devotion – and at a time and in a place (Umbria) that sprouted mystic saints like mushrooms in a rain. People of the middle ages here understood that devotion was a good deal more than mere personal, emotive sentiment – a modernist conceit. Humanism was the beginning of the corruption of the purpose of Catholic art.

And about that Feast…

It was one of those that got nuked out of existence by the “reformers”. Until then, the month of July was dedicated to the Most Precious Blood of Jesus. Of which John XXIII says, “From infancy this devotion was instilled in us within our own household. Fondly we still recall how our parents used to recite the Litany of the Most Precious Blood every day during July.”

This is the great medieval tradition of devotion – and of rock-solid belief in its efficacy – passed down through the generations, through the family, through the Catholic community – intact into our own time. I’ve bene thinking more and more lately, “How can I engage daily with this great tradition? How can I slough off modernity and become more medieval?” This is how. Do the things they did. Believe the things they believed. Live life for the purpose they lived it.

The feast was instituted by Bd. Pius IX after the revolutionaries were expelled from Rome, and he was able to return to the Eternal City, so it seems like a good devotion for the likes of us. Pius XI raised the rank of the feast to a double of the first class. It was heavily promoted by John XXIII. A few years later, the Bugniniite “reformers” simply removed the Feast of the Most Precious Blood entirely.

…because, you know… you can get enough of all this religious stuff, amirite?

“Father, by the blood of your Son you have set us free and saved us from death.

Continue your work of love within us, that by constantly celebrating the mystery

of our salvation we may reach the eternal life it promises.

We ask this through Christ our Lord.

Traditional collect for the Feast:

the Redeemer of the world and willed to be appeased by his blood.

Grant, we beg of Thee, that we may worthily adore this price

of our salvation and through its power be safeguarded from the

evils of the present life so that we may rejoice

in its fruits forever in heaven.

Through the same Christ our Lord.

I renounce the Novus Ordo…

I renounce all its works…

I renounce all its empty promises…

Following our predecessors’ example we have taken further steps to promote the devotion to the Precious Blood of the unblemished Lamb, Jesus Christ. We have approved the Litany of the Precious Blood drawn up by the Sacred Congregation of Rites and through special indulgences have encouraged its public and private recitation throughout the Catholic world. Amid today’s most serious and pressing spiritual needs, may this latest exercise of that “care for all the churches” proper to our sovereign office awaken in Christian hearts a firm conviction about the supreme abiding effectiveness of these three devotions.

Litany of the Most Precious Blood of Jesus
For private recitation.

V. Thou hast redeemed us, O Lord, in Thy Blood.
R. And made us, for our God, a Kingdom.
Let us pray.
Almighty and eternal God, Thou hast appointed Thine only-begotten Son the Redeemer of the world, and willed to be appeased by His Blood. Grant we beg ofThee, that we may worthily adore this price of our salvation, and through its power be safeguarded from the evils of the present life, so that we may rejoice in its fruits forever in Heaven. Through the same Christ our Lord. R. Amen.