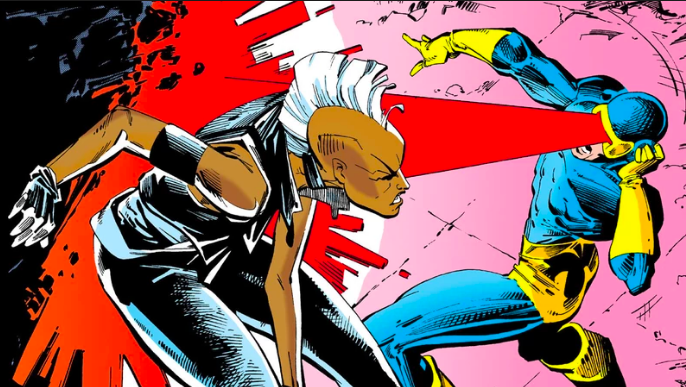 So, a friend and I were discussing the other day how many of the Avengers are just regular humans. Highly trained and multitalented, to be sure, but not “enhanced” in any way, so they rely on tech to be super. Hawkeye, Black Widow, Sam the Eagle, Ant Man, Tony Stark… they’ve all got specialised training, but they’re just normal humans.

Comics have tackled this issue. I remember in the 80s when I was reading X-Men every month they had a long sequence when Storm lost her powers and became “just plain folks” and it was a big deal for her. They had to work out how to keep her as leader of the X-Men with no mutant superpowers. There was this issue when she and Cyclops had this big fight to see who’s boss, and she won by being just smart and agile and brave. (Seriously, Cyclops was always a bit of a dolt. Trying to be like Captain America but without the strength of character. Dude, whining is not a leadership quality, mkay?)

The Message For The Kids was that leadership qualities, and even superheroism, was something you got by having a strong character and working hard to build up your skills and devoting yourself to the cause of Good, not out of some weird quirk of genetics or magic or getting bitten by a spider or being a test subject of mad scientist experiments. Which I guess was a pretty good Message as far as these things go.

Now it’s making me think about the saints, who are fairly described by some as Catholicism’s superheroes. Some of them had superpowers. We have bilocating saints, flying saints, saints who carry around their own severed heads while preaching under their own arms. And all that’s great. We love that stuff. But the ones that really resonate with modern people are the guys like Thomas More and Maximilian Kolbe and St. John Fisher. Even modern mystics fascinate us because of their hiddenness, their “just plain folksness.” I’m thinking of Annamaria Taigi, one of the great mystic saints of the modern period. No one in her own time knew anything about her mystical experiences. To all outward appearances she was just a regular housewife, with normal  housewife challenges. Devout, sure. But that was at a time when the modern journalistic definition of “devout” could have been applied to nearly every person in Christendom. (Believes in God; goes to church.)

Do you think it’s fair to say that Tony Stark’s “superpower” is his engineering genius? Maybe that was one of the take-away things from Iron Man 3 – that Tony didn’t have his suit, and had to rely on his wits and engineering ability. He became “the Mechanic.” He had to be reminded by The Kid (Everyman) that he wasn’t a superhero because of the suit; he was a superhero because 1) he was The Mechanic – the engineering genius and 2) he had devoted himself to the cause of righteousness. (Btw: Isn’t this the kind of Home Hardware midnight shopping trip that gets you arrested by Homeland Security these days? And kind of for exactly this reason?)

This was revisited in Civil War when he recruited Peter Parker, a younger version of himself… Peter isn’t recruited because he’s got the spider-powers, but because he’s already dedicated himself to the same cause.

Did you notice? Tony’s lines in all his scenes with Peter Parker are actually addressed to his own younger self.

“If you’re nothing without the suit then you shouldn’t have it.” I laughed a bit when he said, “This is the adult talking…” He’s turning into the dad he always wanted for the fatherless Peter, and at the same time for his own fatherless self, the young self he’s been carrying around all this time. “Who do you think called the FBI?” – the thing the _adult_ does.

Robert Downey Junior is about my age, and has been through his own belated coming-of-age horror show. He has said in interviews that he got into drugs in a big way because it was a way to bond with his hippie, druggie father. Which I guess is why he is such a natural fit for this role, and also why he’s so popular with all us children-of-hippies, Gen-X orphans. The script puts the line we all grew up with into Peter Parker’s mouth, “If you even cared you’d actually be here.” And there’s Tony, the guy who knows what that means, making reparation for all the sins of all of absentee Boomer-fatherhood, by being there.

In Avengers, Steve asks him, “Big man in a suit of armour… Take that off what are you?” “Genius billionaire playboy-philanthropist.” I’m ME, dude! You could say it was Tony’s narcissism talking. (I don’t think he demonstrates any of the textbook narcissistic traits, btw. Those guys are a___s. No one would ever want to watch 18 films starring a narcissist. Tony’s just a bit spoiled, insecure and has a bad case of mad-at-his-dad syndrome.) But of course Steve had a point, and Tony’s lame retort about the bottle is a lose and everyone in the room knew it.

You can see that Steve knows he just won the argument. Good acting by Chris Evans. He doesn’t overplay the look, but we know he’s thinking, “Gotcha.” And Joss Whedon – who knows a thing or two about the coming-of-age genre – kept the camera close in here so we could get the point.

Steve was talking about interior strength, not superpowers. Everyone there, including Tony, knew he had already gone through his whole life as a man for others. He had character before he had superpowers. Hell, he was hero-worshipped by Phil Coulson, for pete sake!

Tony was just now, in his fifties, learning not to be the “cool guy” egotist lone-wolf. That stuff plays OK with the chicks in high school where it doesn’t matter much, doesn’t have apocalyptic consequences, but then he met Ultron. And we know Tony has been a mental and moral teenager most of his life – probably to try to force his dad to be a dad – and is just starting to deal with becoming the adult by becoming a superhero.

The subtext here? “Oh really, you two knew each other? He never mentioned that…” With the return of Steve Rogers from the ice, his re-appearance as the now-anachronistically sterling-charactered Captain America – the man Tony knew his dad always wanted him to become – and the creation of the Avengers, Tony’s dad-issues must have reached a kaleidoscopic crescendo of confusion.

So of course, he knew what Steve was telling him was true. And by Infinity War we see that Tony has interiorised that message. He’s become the guy who _would,_ and does, throw himself on the wire for another guy.

One of the big strengths of the first Avengers movie, and then the rest of the MCU*, was their dive into these kinds of issues – essentially issues of moral and spiritual growth – that are, believe it or not, often talked about in the comics. The interaction, the leadership rivalry between Steve Rogers and Tony Stark is interesting this way. This whole scene was about character vs. powers. In fact, you could say that the whole film, and then the whole MCU was about this. Certainly the three Iron Man movies were about this. (Not to mention the Thor-Loki-Odin thing…)

I like this aspect of comic books – and I think this is why it is a genre that appeals so much to teenaged boys trying to find ways to be men in a world that increasingly hates the manly virtues. Or pretends to.

*****I haven’t seen Guardians of the Galaxy 2, but I understand it was about more or less this; Gen-X getting over the loss of the worthless hippie father, the guy who abandoned the family to go and “find himself,” that we all know and love/hate.