Back in Dallas in 2002, the US bishops gave themselves a pass. They put this Dallas Charter on clerical sex abuse up in front of the cameras, a thing that brazenly shifted blame, and said the whole affair was over and-can-everyone-please-go-back-to-respecting-us-now…

Frankly, the only people fooled were themselves. The Dallas Charter specifically excluded their own from the regulations, focusing on the media-generated phantasm of “pedophile priests”. LifeSite and a few others climbed wearily back onto the housetops to start shouting – again – that the whole thing was a whitewash, and that the facts clearly indicated that 1) it was the preponderance of homosexuals in the priesthood and episcopate that was to blame 2) the victims were almost never children, but adolescent males 3) that bishops were guilty of collusion by shifting blame and covering up.

Of course, LifeSite were among the majority who had known about McCarrick all along. It was the worst kept secret in the Church. In fact, the same could be said for the entire homosexual nightmare in the Catholic institutions. 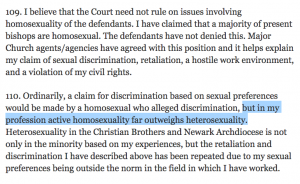 Rod Dreher is collecting data on how much this was true, and how much everyone knew, and how tightly controlled the bishop-silence was, and remains. And how this includes the “good” bishops, the men most people who hold the simplistic “conservatives vs. liberals” narrative have always held to be the “good guys”.

The level of denial required to imagine that there is a group of “good bishops” out there working against the badness in the Church reaches into the range of the psychotic. But it is out there still. And the men who want to be seen as the good guys, making all the right noises, are capitalising on it.

Today this post from Bishop Thomas Joseph Tobin, dubbed the “good Tobin” (with increasing irony, it should be noted) turned up in my feed today, and it’s hard to believe.

Despite the egregious offenses of a few, and despite the faults and sins we all have, I’m very proud of my brother bishops and I admire and applaud the great work they do everyday for Christ and His Church.

I think the “good” Bishop Thomas Joseph Tobin of Providence Rhode Island learned an uncomfortable lesson today from the responses he got. I think we’re up to 94 responses, and I only saw two that were praising him for it. 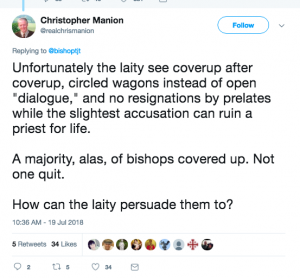 The only apt description of the response: “blinding hot rage.” Most people there, with the possible exception of myself, were pretty polite about it, there weren’t any Bad Swears, but it’s easy to see that this kind of self-congratulatory PR blither isn’t going to fly ever again.

We want you gone. That’s the long and the short of it. The well is poisoned. The bishop brand is toxic. We’re pretty much here: “They are corrupt, they do abominable deeds; there is none who does good. They have all turned aside; together they have become corrupt; there is none who does good, not even one.” And we’re about ready to run the entire boatload out on a rail.

It shows me that my suspicion is correct: in their polite little bubbleverse they have no idea that the peasants are getting ready with the pitchforks and torches, that plans for DIY gallows are being Googled…

In seriousness, I think they don’t understand that there are laity who are working right now on creating financial endowments to build churches and fund priests completely outside the episcopal structures. That laymen are grouping together to buy convents for nuns because they’re sick of bishops destroying religious orders. It’s been decades since they started grouping together to do homeschooling so they could keep their kids out of (what remains of) Catholic schools, to safeguard them bodily and spiritually.

So, I thought I’d try to be fair. I thought maybe I’d assume that Bishop GoodTobin is actually a decent guy who means well, (I know; stop laughing) and that this little thing was just a bit of bad timing or a misplaced effort to help. A bit of totally tone deaf PR, maybe on the suggestion of a lawyer or chancery official. Completely, utterly, inappropriate – like making a bawdy joke about the deceased to the widow at a funeral. But not completely malicious. (Let’s pretend, anyway…)

To all bishops taken aback by the current seething rage of the laity, here are some things you can do, for realsies and no irony, that would win back a modicum of trust.

Fly to Italy in a charter plane, pick up Fr. Manelli and any surviving FFIs & FSIs you can find, and fly them back to your diocese and set them up so they can get the apostolate going again.

In general, stop smiling and nodding into the cameras as we all watch your wonderful “Brother bishops” destroy what’s left of the Church.

Understanding that this is just the first stuff that comes to mind, I’d say this is the minimum. This is the VERY LEAST it is going to take.