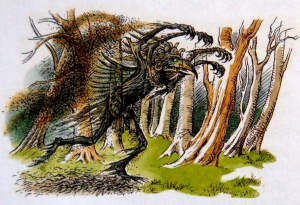 What makes me so outraged about the Bergoglian heresy is that it proposes a different God, and no God I recognise. If the Bergoglian god is God, then life is over. There is nothing at all to live for.

Fortunately, I know it isn’t. The god of Bergoglian surprises is an imposter, not the great Son of the Emperor Oversea.

It enrages me to watch now while simple, innocent people are told that Shift the Pope can just change who and what Aslan is by the obvious trickery of saying He isn’t a tame lion.

What is this contradictory monster Shift is trying to sell us as the true Lion? A thing – a demon – that no Narnian would recognise as the One who shed His blood for them.

Not the Aslan they knew and longed for. It is something else entirely.

“He is not a tame lion,” said Tirian. “How should we know what he would do? We, who are murderers. Jewel, I will go back. I will give up my sword and put myself in the hands of these Calormenes and ask that they bring me before Aslan. Let him do justice on me.”

“You will go to your death, then,” said Jewel.

“Do you think I care if Aslan dooms me to death?” said the King. “That would be nothing, nothing at all. Would it not be better to be dead than to have this horrible fear that Aslan has come and is not like the Aslan we have believed in and longed for? It is as if the sun rose one day and were a black sun.”

“I know,” said Jewel. “Or as if you drank water and it were dry water. You are in the right, Sire. This is the end of all things. Let us go and give ourselves up.”

“There is no need for both of us to go.”

“If ever we loved one another, let me go with you now,” said the Unicorn. “If you are dead and if Aslan is not Aslan, what life is left for me?”

Shift had told the Narnians that a thing and its opposite could indeed both be true, that Aslan and Tash could be one. But it was only a ruse intended to create confusion and to increase his power. Shift didn’t believe either in Aslan or Tash, but there were some there who did.

How if they have called upon Tash, unbelieving, and Tash has come?

Someone on a Narnia forum asked, “How could Tirian have been so blind, and why did people believe the ape? How could Narnia have reached such depths?” It must have been going on for some time, don’t you think? With people being slowly lulled into a state of somnolence. The Narnians weren’t fools and they weren’t wicked, but they had failed in vigilance. They had failed to teach their cubs and kittens and pups the truth about Aslan. Perhaps they only remembered vague things about him. Happy stories but nothing of real substance. Perhaps this laxity had been going for a few generations, with only a few, like Roonwit the Centaur, remembering the full truth. Why, indeed, was Tirian so easily taken in at first?

Why were there so few in the crowd of animals to stand up to the Ape? Why was the lamb the only one to pose the awkward dubia?

“Please,” said the Lamb, “I can’t understand. What have we to do with the Calormenes? We belong to Aslan. They belong to Tash. They have a god called Tash. They say he has four arms and the head of a vulture. They kill men on his altar. I don’t believe there’s any such person as Tash. But if there was, how could Aslan be friends with him?“

And to this, we recall, he received a typically Bergoglian answer.

We know Narnia had long been in a prosperous peace and there was a period of false diplomatic peace with the perfidious Tisroc of Calormen, a neighbour who had for centuries desired to annex the northern lands to his empire. We know that before Shift’s sudden and unexpected ascension as the “Sapient Mouthpiece of Aslan,” he had “long been in secret traffic with the Tisroc.”

The whole thing was a set-up.

And it took time. It probably took decades for the infiltration, the creation and spread of the lies, through carefully placed fifth columnists like Ginger the Cat and Shift the Ape. And the faith of the Narnians was weakened – perhaps even that of the royal house – by the slow and stealthy spread of these falsehoods, so that when the crucial moment came, the Dwarves refused the True Aslan when he came, preferring their radical doubt.

Other beasts may not have been so obviously corrupted, but when the King called for aid in the battle before the stable door, the very last battle, very few joined him. Though not many fought on the side of the Ape and Tash, quite a lot simply slunk away into the night.

We are between the Lion’s paws.