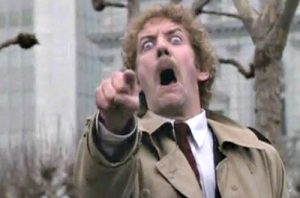 I will never forget the time I was visiting a young Quebecois monk friend of mine at the great Benedictine Abby of Oka, near Montreal. We were talking about the possibility of me following my vocational aspirations in Europe. I said I would like to visit Le Barroux. At that point, he acted like he’d been stung by a bee. He jumped up out of his chair and said, “But, they are integrists!!!” in a tone that implied I had suggested going to visit a tribe of cannibals.

I lost touch with my friend, but recently learned that Oka has closed, for lack of vocations. Non-integrist Catholicism is, quite simply, failing, in both its “conservative” and “liberal” guises. (An increasingly contentless distinction.) It’s drying up like a garden in the Sahara. I think this is because the New Paradigm of VaticanTwoism, built on arid and drifting sand, offers the human soul nothing it cannot get, on much better terms, in irreligion.

And in irreligion, one can at least listen to a Palestrina Mass in peace, without being called all sorts of names.

In a very short while, there will only be “integriste” Catholicism left. I wonder what my friend will do then.

As we watch the disintegration of all our modernity-adjusted civilisational proposals, it’s funny that I’ve been seeing more of this stuff. Enough, in fact, to be sending certain “conservative” Catholic commentators into weird little tizzies. Guys, your ideas aren’t working. Try something else.

In Defence of Catholic Integralism

“Integralism—the need for a confessional Catholic state—is part of Catholic teaching about grace. Grace is required to repair and perfect all of human nature. Human nature involves the political not as a mere expression and instrument of the private, but as a distinctive sphere of existence and understanding in its own right. Unless we commit ourselves to Christ as a political community, a vital part of human reason will remain untransformed by grace. The result will be spiritual conflict and degradation.”