Monsignor Jean François Lantheaume, is the former first counsellor at the apostolic nunciature in Washington D.C. when Vigano was nuncio there.

He spoke yesterday to CNA 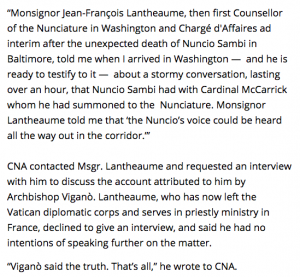 And this was passed on to me from his Facebook feed today:

Is what he says true? His accusations against the Pope are very serious.
Jean François Lantheaume
All says the whole truth. I am a witness. The nuncio Vigano is the most honest Prelate that I know in the Vatican
Julien Fafart
That’s terrible, pray, the storm will be terrible
Jean François Lantheaume
Worse that you think Juju. Ready yourself…
Charly Blainville
You’re not reassuring us dear Father !
Jean François Lantheaume
My goal is not to reassure you, but to tell the truth ! Bishops are neither unscathed nor untouchable: they are all just as much sinners as are others !!! let it be said once and for all… they do not enjoy papal infallibility…! But of course as soon as one tries to tell the truth, you have your head cut off, or you “have a bad spirit”…. it’s been over twenty years since I said what I had to say…. now believe what you want, but I can tell you as being the direct witness that Vigano is telling the truth: I was the direct witness ! these may be the last lines I write… if I am found chopped up by a chainsaw and my body sunk in concrete, the police and the hacks will say that we have to consider the hypothesis of suicide !!!

Apparently, he’s quoting this, a comedy sketch from French TV