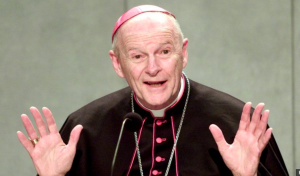 “Hey, no harm; no foul. They were all over the legal age…Except that one time…”

There is a lot of squid ink being squirted out on the innernet about the Vigano thing. One of the talking points seems to be, “We’re not talking about crimes because McCarrick’s victims were not minors.”

Uh… guys? Let’s just ask the female acquaintances of Harvey Weinstein, shall we? Can you imagine the response if a Hollywood producer had used the excuse for his casting couch, “Well, she wasn’t under age…” We live in a time when looking at a woman the wrong way is a prosecutable offense. How is this even flying?

As a friend of mine said, “Emphasizing the age of consent is a form of what we now call ‘victim-shaming,’ implying that being sexually assaulted is somehow not a violation because you’re over a certain age.

“When your defence is, ‘Well, canon law doesn’t specifically state that raping and sexually assaulting seminarians is against the law,’ you really need a new strategy.”

But why are the Bergoglians so insistent about the age of McCarrick’s victims? 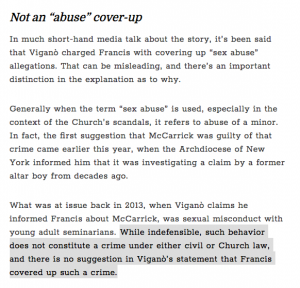 Why are people like John Allen making such a big point that only one of them was “a minor”? So, like, it barely even counts, right?

What’s the implication here? Why is it all just fun n’ games as long as the men involved were over some arbitrary “legal age limit” set by secular law? Secular law, moreover, that hasn’t given a stuff for moral realities for the last 200 years? It’s not like we’re talking about Hollywood types; these guys are all supposed to be Catholic priests,  bishops and cardinals. They’re supposed to care about more than the strict letter of the secular law.

Moreover, it’s bullshit. What I’ve been seeing described is clearly assault, even by secular standards. I’ve read the testimony of the people who have been contacting Rod Dreher. I’m thinking about that young guy McCarrick got gropey with under the sheets who got up and vomited and then had to pretend to sleep in a chair all night. That doesn’t sound consensual to me.

In RealworldLand, that’s what we call “aggravated sexual assault,” and as far as I know it’s a crime everywhere. Seriously, John Allen/Austen Ivereigh/James Martin, how is sexual assault not a crime? I’m guessing some of McCarrick’s lads consented, but as far as I understand it sodomy in the Catholic moral law is always a violation, whether the person consents or not. (Sorry about getting gross here.)

A friend with theology degrees explained to me about “crimes” in Canon law:

“Canon law doesn’t spell out most crimes, because it’s not that kind of law code. It doesn’t have laws against simple assault, or robbery, or jay walking or whatever.

“It’s a code for running the Church. All those other things, unless they have a specifically ecclesiastical aspect, are not specifically illegal – they’re covered in the catchall laws of church administration.

“So it’s technically true that some of these things may not be specified in the code, but that’s very much beside the point.

“The Church absolutely has legal means, per the code of Canon Law, too address crimes that are not specified by name in the code.”

To you and me, this tack seems absurd, and false. So, why are they doing it?

Because they don’t believe in God.

It seems like a non-sequitur to us because we look at it through a Catholic lens, through which any sexual immorality of a prominent prelate is a horror, utterly to be abominated.

But these are godless men. To the godless, such as the likes of Francis, Cupich, John Allen and Wuerl, it is an extremely important distinction. They are concerned only with what the secular law says because the law of God means nothing to them. They are positivists in every sense, because to them, for whom there is no God, only the actual letter of the man-made law counts.

Don’t forget that Francis himself, when explaining Ricca, made the distinction: “These were not crimes, eh?” because Ricca’s partners were always over the legal age, so that made it OK.

Here’s John Allen making a point of it again. This was July 2013 in NCR.

It is therefore quite interesting to see who is making this distinction as if it’s important. And who isn’t.

Every day and in every way, for those with eyes to see, the two sides in the Church are lining up, and the difference between them is increasingly being demonstrated to be godless materialists on one side, and believers in supernatural realities on the other.