The story is loved, especially by lots of young girls, as one of love, and properly so. But it is also, and more importantly, one of hope and the fulfilment of the promises of suffering. 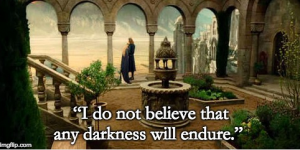 It’s the nature of the Real to win. Moral reality is no different from other kinds, like math and physics. It always wins.

One characteristic of the sides in LOTR was the different approaches to suffering. The choices put before the good guys were hope or despair. Sam was the exemplar of the first, Frodo the second. Frodo went forward assuming he would fail and that evil would win. For Sam this was just not on the plate, and it was Sam’s “fundamental option” for hope that won the day for everyone.

The difference between the two brothers, Boromir and Faramir, is like that. Boromir the valiant, like his father, knew who the enemy was but trusted his own strength, the strength of men and horses and arms. It was a form of false worship and left him open to the temptation of despair, the temptation of the Ring. And when these failed, they both despaired (though Boromir repented.)

Faramir trusted something higher than that and the Ring never tempted him at all.