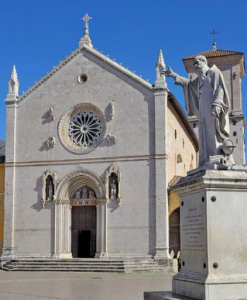 Many people know about the proposed plan to rebuild the Basilica of Saint Benedict in Norcia in some kind of as-yet-unspecified chimeric style, a blending or “fusion between ancient and modern.”

This plan, however, is forcefully opposed by the people of Norcia themselves who only want the return of their basilica as it was before the quakes. These have formed a committee and are asking for the people of the world who love Norcia and St. Benedict, to bring forward this request – that the basilica be rebuilt exactly as it was – and for it to be spread as far as possible.

The international competition was opened this summer to submit architectural plans. Nicola Alemanno, the mayor said,

“The Basilica of San Benedetto is the symbol of our identity, our culture, our history and involves our community in the deepest feelings. We have thought about this moment when our Community has the opportunity to know, express and discuss in the presence of the Technical Commission. We want to continue to develop important attention because the Basilica is not only the heritage of Norcia but of Italy, Europe and the World its reconstruction must be an example of quality and guarantee.“

The letter is addressed to Prof. Antonio Paolucci, a representative of the Beni Culturali, the government ministry that oversees the cultural patrimony of most of Italy’s churches. Prof. Paolucci is the head of the commission for reconstruction. 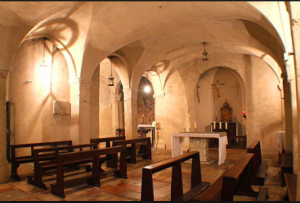 Personally I didn’t care much for the Baroquified upstairs basilica, though I thought the monks had made great improvements. The real blow, the loss hardest to bear, was the ancient crypt church underneath, where there are remnants of the 1st century BC house believed to be the family home of Benedict and Scolastica. Whenever we had Vespers in the crypt it was always a great treat. The crypt was completely buried in rubble. The bell tower fell on to the church, collapsing the roof, then the weight of all the masonry of the tower plus roof made the floor give way, so the whole thing crashed into the crypt.

To join your voice to that of the authors, I have been told the way is to send an email with your name and where you live to

Here is the rough (Google) translation of the open letter.

Attention of the the Commission
for the Reconstruction of the Basilica of St. Benedict of Norcia
President Prof. Antonio Paolucci

Dear members of the commission, eminent prof. Paolucci, we address this appeal to your working group, in relation to the future reconstruction of the Basilica of St. Benedict of Norcia.

The assumption of what we will say below is to relate to you with civility and courtesy. We have set up a spontaneous committee of Nursini and people from this town, a casket of history, culture, art, and victim of the earthquake.

Our intent here is to express fully and in writing what we have in various places up to now expressed by many voices and at the level of public opinion, not just citizens. Therefore, on all the following text we will start a free subscription that you will receive as soon as possible.

We are Nursini. Some of those who will subscribe to these lines are Nursini by choice. We belong to Norcia for various reasons, and we are in love with this place and its own people, tenacious and frank. In fact, our core identity is that of the strength to resist and then rebuild, that of study, of industriousness.

Some of us, like Benedict, have had to leave this wonderful land to go elsewhere, following one’s own vocation, without ever forgetting our own provenance, our ancestors, who rest here in peace. Others stayed to lead our own young people, to make hospitable, welcoming, fertile, a territory capable of showing, almost without human intervention, a landscape and places, which the word alone sometimes manages to describe only partially as to beauty and atmosphere; places certainly, for us, impossible to abandon and forget.

Benedict is our great Patron Saint. For those of us who are believers, he has one extraordinary spiritual function. He has saved and passed on the nuclei founding the culture of the West. It is the saint of the strength to believe in a heavenly Jerusalem to aspire to also on earth, peace and dialogue between men and nations. For those who are secular, his example of luminous rationality guides daily action in work, in families, in society.

Benedict is a giant. We are little men.

In love with the context and place that gave birth to him, we are always linked to space where tradition has it that his father, Eutropio Anicio, Roman prefect and Abundanza Reguardati, noble Nursini, inhabited giving it light. Far be it from us to forget that Norcia is the homeland of his twin, Scholastica, sweet support of the Great Founder.

The Basilica, in relation to which you are called with a high intellectual task to identify the basic reconstruction criteria, scarred by the destruction of October 30, 2016 but remained intact in some of its fundamental parts, it has assumed an aspect over the centuries harmonious, perfectly integrated, almost miraculously, in relation to colour, shape, proportions, in our main town square, with the other monuments that they are our history.

For those present and future signatories of this appeal, our Basilica is much more than a simple artefact, of an aggregate of stones, motifs, styles, works of art contained in it. In its simple and candid form, seen from the Piazza, we recognized each time our gaze found it, a friendly form and the point of confluence of deep “energies”.

In it, almost all our identity pride could materialize, almost physically, therefore, our being of believers and citizens. Under his portico, sitting between his medieval measures, we could enjoy coolness and sip, almost without making steps, the pure water of our mountains.

In its crypt, we could honour the birth of the patron of our continent and put ourselves there in contact with the depth of our self even without practicing religions, thanks to the reception and priestly care, made perfect by a long-awaited arrival of Benedictine monks.

Sitting in the churchyard sun, in the spring, after Mass, we liked to read the newspaper and meet our friends.

The existence of this place is, therefore, for us, something infinitely expensive.
A place of identity, of encounters and emotions of which we now feel, in
a harrowing way, defrauded.

From its ancient form, it does not matter if composite as for styles, we can not do in any way less; nor would we want them to do without our children who, a
tomorrow, they might reproach us for not having clearly expressed the thought about one well, not just material, that we love so much.

We therefore invite you to take due account of what we express in the mode that it follows.

We would like the ancient Basilica of San Benedetto, as we have known it before the earthquake, to have it reconstructed identically.

We are not sentimental people who deny reality and look at the past. Instead we show our attachment to identity of memory and we feel definitely human in trying this.

We are aware, as a testimony of our concrete and rational spirit, that what is
happened at the same time, an extraordinary attention to compliance with the rules and rigorous reconstruction technologies that are extremely up-to-date and able to preserve Norcia for the centuries to come.

***
Dear members, I am prof. Paolucci.
We address in particular to you, known luminary called to coordinate the work group.

We know that the task of those who will be called to rebuild is particularly difficult.

But we also believe that, in the complex context of opinions on what has happened, this our voice – although not foreseen by bureaucracy, written protocols and regulations – it has a value and an objective weight, of type, let’s say so, very particular with which to compare; opinion of awareness that, by synthesizing our ideas in a strong and clear way, we can enucleate:

“We rebuild the Basilica of San Benedetto as it was and where it was, for our community of Norcia and for the whole world, respecting the most severe and advanced standards and technologies earthquake-proof “.

We look forward to your kind feedback, wishing you the best and the most accurate thoughts, together with the most fruitful work on this ancient jewel of the heritage of humanity.