This latest retelling of the grisly story of St. Luke’s NuChurch re-education gulag for recalcitrant priests is reminding me that we need to talk about something.

Let’s talk about the abuse of holy obedience, and how Holy Obedience doesn’t count if we’re talking about spiritual suicide; obeying your superiors right over the cliff to perdition.

This from Zed has been gaining some traction in the wake of the horror story of Fr. Kalchik (which I think we haven’t heard the last of, and don’t know the half of…)

The pattern is alarmingly similar. The priest has some sort of dust up in the parish (or wherever). For example, a woman gets angry because he preached about contraception, someone claims that he as “boundary issues”, somebody on the staff says that he is “cold” or “remote”. They complain to the bishop. The bishop tells the priest – pressures the priest – to go for “evaluation”. With great trepidation the priest obeys (an important point). He goes for a week or two of evaluation, at the end of which he is told that there isn’t much wrong with him. He goes home, thinking that all is well. Shortly thereafter, he is called in to the bishop’s office, where he is told that the clinic sent the bishop a very different assessment. The priest is diagnosed – and it is always about the same – narcissism and borderline bi-polar. The bishop then really puts the screws to the man to go back that clinic for “treatment”.  He is told for three months or so. But when he gets there, and they confiscate his mobile phone and even his shaving kit, and start pumping him full of drugs and monitoring/controlling email, he is told that he’ll be there for six months. The horror show begins.

I’ve said before that the horrors of this pontificate – and the trickle-down effect of creatures like Cupich being made bishops and cardinals – are starting to wake people up, even priests. There’s certainly been enough bad press for a place like St. Luke’s to warn priests who might be ordered there that it’s in their interests to disappear instead of go there voluntarily. But it is still happening. Priests, seminarians and religious are still being manipulated by a false understanding of Holy Obedience.

Here’s the one key missing factor, the one error being made by “conservatives” that has allowed the entire take-over:

If your superior wants you to obey him in opposition to Christ, or to the Faith that Christ founded for the salvation of souls, then your obedience is false.

We’ve been hearing the phrase “abuse of trust” quite a bit in relation to the homosexual abuser situation. It’s one of the favoured euphemisms we hear from official diocesan statements. Such and such a priest is accused of “boundary violations” and “abuse of trust.” This is code for he raped choir boys who were over the legal age limit, (“under age,” “abuse of minors” is in a separate category because then the secular authorities – with their very real prisons – become involved) or, as we have seen, pressured seminarians into unwanted sexual contact. (It seems to be failing to impress on their brains that this actually constitutes aggravated sexual assault, which also involves secular authorities and, at least in theory, their prisons.)

But what does all this mean in the larger context. Everyone’s paying attention to the Cardinals n’ Choir Boys show right now, but we have bigger and, frankly, more difficult fish to fillet.

Because “abuse of trust” in the context of the Holy Catholic Faith means “abuse of holy obedience.” And that’s how the Church has been infiltrated.

That’s how the Church in every institution has come so close to being destroyed.

We believing Catholics – and this is multiplied a thousand-fold in female religious – are taught that “holy obedience” is the highest virtue. Nuns especially are taught to hold this virtue above all others, enforced by pious tales of novices ordered to plant dry sticks only to see them miraculously flowering the next morning. Mary’s “Fiat” – “Let it be done unto me according to thy word…” is held as the model of absolute religious perfection. We are told, “If you obey, you can do no wrong, and any hesitation you might have is a temptation of the devil. If the superior is wrong, God will sort everything out and bring good out of it.”

The problem of course, is that without a correct understanding, without the correct balance between holy obedience and a right knowledge and understanding, this is a recipe for brainwashing. Yes, I really mean actual  brainwashing.  It’s a means of infantilising, rendering a person completely helpless when a real crisis comes.

And we may have noticed that we are in a crisis.

This external crisis – that we have a manifest heretic, an evil man, on Peter’s throne, and are governed in the main by similar characters, men utterly bent on destroying as many souls as possible – is being enormously exacerbated by the internal crisis of faith this situation presents for the faithful, most of whom emphatically DO NOT have a correct balance between holy obedience and right knowledge. None of these very bad men could function at all if they were not followed by people who refuse, out of a distorted notion of obedience, to face up to the reality.

The Devil’s greatest trick was not convincing the world he does not exist; it was convincing good Catholics that they can obey their lawful superiors into sin and heresy, that everything will be fine – they can be heretics – as long as they are practicing holy obedience. There has been a long history, all sorts of historic circumstances, that has brought us to this. A big part of it was the lack of deep formation available to Catholics before Vatican II. A lot more of it was the response of faithful “conservative” Catholics after the Council looking to the bishops, “the Vatican” and the pope for rescue from the chaos of heresy we fell into. A great mythology was built up that “the Vatican will save us,” that as long as there were “good bishops” and a “good pope” out there everything was going the right way. All we had to do was be “the pope’s men” and it would all turn out.

This brainwashing is how they destroyed the convents. This is how a small cadre of revolutionaries could get hold of an entire global institution. It’s a damn clever little key that opened every lock we had.

What’s the missing factor? What is the one aspect of Holy Obedience that keeps the locks secure? Right knowledge. Essentially, the Holy Catholic Faith in its entirety.

Taking only the example of the nuns, the locks were only broken because of the poor quality of formation – of education in the Faith – of nearly all sisters. Most people in the lead-up to the cataclysm were given no more than simple catechism; a recitation of formulas that left them unable to respond intelligently to the devious manipulations of the Modernists. The Modernist MO is to twist, deconstruct and slyly misdirect through the manipulation of language and definitions. If a Modernist uses terms from Thomas Aquinas, he is using them to mean something Thomas never did. Simply being able to recite the answers in the Baltimore Catechism was never going to be sufficient defence.

This weakness of Catholic formation – knowledge of the Faith – was quickly exploited. And make no mistake, the targeting of the nuns was a deliberate and calculated assault. Naturally they went after the teaching orders so they could gain access to the entire Catholic world; kids from the earliest ages. But they did it to contemplatives as well. This is how you get entire ancient orders of cloistered nuns turned into – not to put too fine a point on it – idiots; infantilised nitwits, rubes, gullible, credulous fools, who will fawn with breathless, weepy adoration over anything and everything that comes from the Vatican, as though the men there are somehow magically transformed into angels as soon as they’re given a curial sinecure.

The abuse of Holy Obedience created this absolutely cringeworthy spectacle:

It’s good to be innocent.

But it’s bad to be stupid.

And is the reason there are so few monastic communities alert to the danger – the determination of these evil men to utterly destroy their way of life. The reports I’ve had of nuns gushing and fawning over Cor orans is the result of this infantilisation. I’ve been told that they are just so very, very pleased that the Vatican has noticed them, that they’re being told over and over by their superiors that “the Holy See loves us…”

Oh yes, they do indeed. Much like a lion loves an antelope. 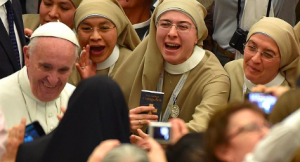 The nuns themselves are responsible for the destruction of the religious life. They gave it away. This is especially true of the “conservatives” whose aim in these times is to demonstrate not their faithfulness to the Catholic religion or to their charisms, or even to Christ, but to the person of the pope, whoever he is, and whatever he wants to do.

A Sister Speaks: ‘Cor Orans is the Death-Knell of Carmel {.itemTitle}

The papacy has become a cult of a man; a cult of adulation that was started by John Paul II. This pope has been opportunistically using this distortion. It’s dying down among the general public – who have daily access to news and information about the things he’s saying and doing. But nuns don’t use a lot of social media, and they read the kinds of institutional periodicals that are only interested in perpetuating the mythology.

But I have to wonder if their poor Catholic formation would allow them to understand what’s wrong with this:

Pope Francis breaks Catholic traditions whenever he wants because he is ‘free from disordered attachments.’ Our Church has indeed entered a new phase: with the advent of this first Jesuit pope, it is openly ruled by an individual rather than by the authority of Scripture alone or even its own dictates of tradition plus Scripture. 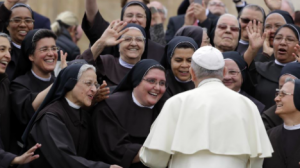 … and how many of the sisters, screaming at the sight of this pope like swooning teenagers at a rock concert, would agree.

Time to start being grown-ups, ladies.