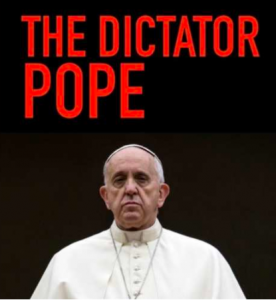 Here’s a question no one seems to be asking so far: why does Jorge Bergoglio think it’s OK to be a tyrant?

It’s not often these days that I have the concentration to read though something on a screen all the way through, but this from my friend John Lamont is a real grabber if you know even a little about what is going on in the Church right now.

Restoration of discipline among clergy and religious was one of the main goals of the Counter-Reformation. The theories of law and authority that guided this restoration differed from a pure nominalist position, but these differences were lost when the practical principles for training in obedience were devised. These principles embodied a tyrannical understanding of authority, and a servile understanding of rightful obedience as consisting in total submission to the will of the superior. The most influential formulation of these principles was given in the writings of St. Ignatius Loyola on obedience.

I’m doing a thing on all this for the Remnant’s next print edition. It’s very complicated and of course it’s written in John’s usual academic style, which can be daunting for a lot of us who are used to reading things intended for the internet.

The intellectual origins of this conception of authority and obedience are largely to be found in nominalist theology and philosophy. William of Ockham notoriously came down on one side of the Euthyphro dilemma by asserting that good actions are good simply because they are commanded by God, and that God could make idolatry, murder, and sodomy good, and abstention from these actions evil, if he commanded that they be performed. This conception of divine authority lends support to a tyrannical understanding of authority in general as based on the arbitrary will of the possessor of power, rather than on law.

Like other writers, Rodriguez makes the usual exception for obedience to commands that are manifestly contrary to the divine law. It has however been noted that the Jesuit doctrine of probabilism tends to nullify this exception. According to this doctrine, there is no sin in doing any action that a reputable authority maintains to be permissible; and one’s religious superior normally counts as a reputable authority. There is also a psychological fact that tends to make this exception nugatory. Internalising and practicing this notion of obedience is difficult, and requires time, motivation, and effort. When it has been done successfully, it has a lasting effect.
Once one has destroyed one’s capacity to criticise the actions of one’s superiors, one cannot revive this capacity and its exercise at will. Following the directive to refuse obedience to one’s superiors when their commands are manifestly sinful then becomes psychologically difficult or even impossible – except perhaps in the most extreme cases, such as commands to murder someone, which are not the sort of sinful commands that religious superiors often have an interest in giving in any case.

One of the main tasks we bloggers/commenters have is to translate this kind of writing for a broader audience. This one is so important that my usual reluctance to get into things is going to have to be set aside. (It was how I started all this, back in 1999 when I started learning the implications of our civilisational acceptance of the 18th century materialist philosophy of Utilitarianism. I discovered that something horrifying and invisible was eating everyone’s brains, like a damn Lovecraftian monster.)

It’s a bit of a slog, though. And as we all know, these days none of our attention spans are what they were. But as I wade through it, I’ll toss up some notes here so we can all start getting an idea of how to come to grips with it.

For now I’ll just say that John’s article is extremely important. The thing we’re all going through right now has a great deal to do with what is clearly an erroneous, and very harmful, concept of holy obedience. It has incredibly far-reaching implications, and he’s put me on to some more material. I think the most important thing to ask is how to fix it.

More and more I think we need to focus on solutions; what can we do? is starting to become the most crucial of all questions, and a big part of the answer is going to be to “re-train” our Catholic minds in a more authentic spirituality than has been largely unavailable for a long time, and offer the start of a way through it all.

Hi John…I am in communication with some nuns who are right now having a mighty struggle against their programming with regards the terrible goings on in Rome. One of the things we have identified is precisely this “infantilisation” in their conception of holy obedience that you wrote about in your piece for Rorate Caeli. As soon as I read it, I realised this is a big key to the problem. They know with their intellect that they cannot follow the path to auto-destruction that Cor orans and that pack of vultures would have them take, but the emotional and psychological toll it is taking on them to overcome this mental training is fearsome to behold. They are coming to understand that it was something that was done to them deliberately and amounts to a form of brainwashing. I passed along your article and they said yes, they had in fact been given Rodriguez to read as the main source of the novitiate training.

What we need now is more of the earlier, Thomistic/medieval idea of obedience this militaristic Jesuit thing replaced. Or at least some sources to find it. Your exposition of the problem was masterful (and damning!). I guess we just need to have more on the solution. As I’m sure you know, I’m a big believer in the Restoration theory that flatly proposes that we do indeed turn back the clock. As a Benedictine I’m not that sold in the Tridentine reforms, and am pretty keen on digging down to pre-tridentine ways to see what they have to offer. What could the medievals have for us that has been lost. What, for instance, was their response to the wicked Ockham?

A great many religious are having a terrible struggle right now, and are faced with having to make momentous decisions for which they have been quite deliberately stripped of all psychological and emotional preparation. I think at least for their sake more on this subject that can be useful in a practical sense is greatly needed right now.

I hope we can answer some pressing questions. A lot of us want to know, for instance, where did “papal positivism” really come from? Why are the great majority of the remaining believers so eager to jump off the Bergoglian cliff?

I and others have been saying it comes from the John Paul II period in which the structures of the Church were crumbling into Modernist chaos following Vatican II and Catholics ceased trusting their local bishops, turning instead to the pope and “Rome”. This keystone of the “conservative” narrative is what has fuelled the monstrosity of the current pontificate and all its attendant horrors. We traded the actual content of the Catholic religion, the Holy Faith, for “The pope says…”

But that explanation is insufficient. It doesn’t account for why all the bishops who attended the Second Vatican Council went in Catholic and came out Modernist. It doesn’t explain why ALL the religious orders obediently stuck their heads into the noose of Novusordoism, and even the ones who still want to save their orders and charisms even now continue to _absolutely refuse_ to look fearlessly at the obvious causes of their own destruction. Virtually all religious orders in the Catholic Church are hovering on the edge of extinction, and they brought it on themselves and seem eager to finish themselves off.

Why, even now are famous “conservative” communities of cloistered nuns insisting on going along with the plans for them by these manifestly evil men? Why, for example, is the Benedictine monastery of St. Cecilia of Ryde – perhaps the only Benedictine house of nuns in the UK worthy of the name – now requiring TWO YEARS of letter writing from potential candidates before even considering admitting them to the postulancy, citing Cor orans as the reason? Can they really afford to lose so much?

The entire Church has adopted this corrupted, Jesuit conception of Holy Obedience – alien to the Faith before Trent – and infantilised ourselves.

I am only now starting to understand that the training that nearly all religious undertook was in fact a form of brainwashing. From one of the sisters I communicate with, to whom I sent the article by John, I received the following shocking information. I hesitated a bit to share it because it is so horrifying, but I think its important for the whole Church to start understanding how much we’ve been harmed by this quite frankly evil misconception of obedience:

Never question, never criticize, just accept. Get your own thoughts out of the way and conform your mind and will to that of the Superior. All will go well if you simply obey and never ever question. Never voice your opinion. Always try to have the same opinion as the superior. Yep. That’s what many of us have been taught. We read it in practically every book. These ideas have crept in everywhere. They are completely devastating. I have experienced it first hand. There is so much to say about this, but I really don’t know how.

With a concept of obedience like this, you lose the ability to think on your feet. Decision making, especially split second decision making, becomes very difficult because you never want to make a decision without your superior’s permission or approval. You would rather not make a decision than make the wrong one. You are rendered totally helpless.

Making decisions in very critical moments is almost impossible because obedience is the first thing on your mind. One example comes to mind. There were many circumstances that contributed to the tragic fire at Our Lady of the Angels School in 1958, and you cannot blame it on just one thing.

But, one thing that contributed to the high death toll was the fact that the smoke alarm had to be rung manually. And in order to ring it, you had to have the permission of the Superior. Unfortunately on that awful day, the Superior was not in her usual place and no one could get to her quickly (she was teaching in a different building on campus). There was a delay in ringing the alarm. Finally a lay teacher just rang it. But precious minutes were lost and so were 95 lives.

How much more is this Jesuit corruption going to cost us?