Found a neat YT site with the words and the little squares together so you can sing along. 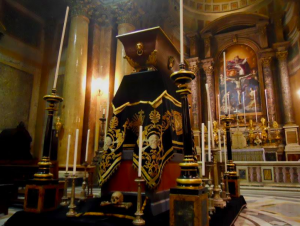 This is what a Mass for All Souls is supposed to look like. That thing is called a “Catafalque.” It symbolises the dead for whom we pray at every requiem Mass (a thing that Catholics used to do). This is the one they do, a little bit taller every year, at my parish in Rome, Santissima Trinita dei Pellegrini. Yes, that’s  real skull and cross bones. No, no one knows who it was or how old, but it’s always been in this church that was built in the 16th century. The pall is black velvet and hand embroidered with skulls and crossbones, and is also Baroque. It’s enormous, and very heavy. Properly speaking the candles should be unbleached beeswax. I believe the sacristy at Trinita is still trying to source these. They are not often made in the required size and if they were would, of course, be immensely expensive. Anyone with bees who wants to make a little money would do worse than making requiem candles.

Here’s Dr. Peter K. on why the Novusordoist funeral rite should be abolished immediately.

The scandal of the modern Catholic funeral
my family and I had gone to a traditional Requiem Mass, sung by a priest friend. The contrast was not just profound, but shocking. Between that day and the following, we were emotionally suspended between two radically different offerings for the dead: one that took death with deadly seriousness, that cared about the fate of the departed soul, and allowed us to suffer; another that shuffled death to the side with platitudes and empty promises. The contrast between Friday’s black vestments, Dies irae, and whispered suffrages and Saturday’s stole-surmounted white chasuble and amplified sentiments of universal goodwill seemed to epitomize the chasm that separates the faith of the saints from the prematurely ageing modernism of yesterday.

I found myself thinking: The greatest miracle of our times is that the Catholic Faith has survived the liturgical reform.

It reminds me of the funeral Mass for my mother in Vancouver, performed by the Franciscan priest who helped her through. I’ll always be grateful to this priest who made sure she had the sacraments. But when he handed me plastic ring binder and asked me to choose the readings for the Mass I was completely nonplussed. What was I supposed to do? Weren’t there proper readings for a funeral Mass in the new rites? He didn’t seem to know what I was talking about. I did my best, but I was immensely relieved to get back to sanity of the Toronto Oratory where one of the fathers came over and offered a proper Requiem for mum at our house chapel.

It was so strange, talking to that kindly but clewless Franciscan. The two of us sitting across the table from each other, looking blankly at each other. Speaking two entirely different ecclesial languages.