I haven’t had much to say about the bishops’ meeting in Baltimore, I guess mostly because there’s little to say about an event whose conclusion was obvious before it began.

I offer only a few links to various items that seem interesting enough to be worth a few minutes, if for some reason we still think these people are relevant at all. 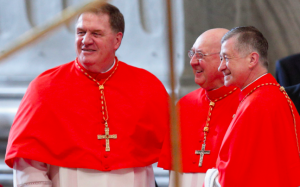 “After delivering a report on the investigations into ‘Uncle Ted’ McCarrick in his Newark archdiocese (it’s complicated), Cardinal Tobin wondered aloud why people don’t trust their bishops. ‘What was there before?” he asked rhetorically. “What was our credibility built on, that it could be so swept away?’”

Let me attempt to answer that question. The credibility of Catholic bishops was built on the presumption that they would be honest with their people, and courageous in defense of the truth. It was “swept away” by twenty years of non-stop revelations that the bishops were not being honest, and not defending the truth. And the remaining shreds of credibility were washed down the drain when, rather than coming clean, prelates asked the public to accept implausible explanations of questionable conduct—such as, just to pick one example, claiming that a “Nighty-night, baby” Twitter message was intended for a sibling.

“The credibility of Catholic bishops was built on the presumption that they would be honest with their people, and courageous in defense of the truth.” 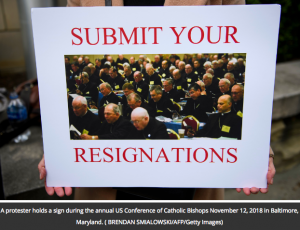 If the bullish heir-apparent to his mentor McCarrick had taken a moment to look up from his mobile he’d have seen a bunch of people standing outside the hotel carrying signs who would probably have been happy to clarify it for him. I think it was something to do with the refusal to own up to the complete moral collapse of the hierarchy… Or something.

Or if he’d listened to this guy’s presentation he might have been assisted.

Francesco Cesareo, chair of the U.S. bishops advisory panel on abuse, says that some bishops must resign pic.twitter.com/1dXEglr7sx

Then Cardinal Rog showed up and brought the house down by telling them all his one weird trick for staying out of jail.

Cardinal Roger Mahony, who has been barred from public ministry in the Archdiocese of Los Angeles for the mishandling and cover-up of abuse cases involving minors and priests there, opened up the comments from the bishops, urging them to seek a greater collegiality amongst themselves as “brother bishops.”

He said the bishops should look to the example of St. Charles Borromeo, who said “we are not bishops alone or separate, we belong to a college and have a responsibility to it.”

I think it was something along the lines of “Pour titanic amounts of money into your lawyer’s pockets, and equal quantities into the Vatican Bank. Oh, and also,  blackmail everyone. EVERYone. Srsly, this works.”

Anyway… the giant nothingburger is over, they’ve all downed the last drop of whiskey in the place and gone home.