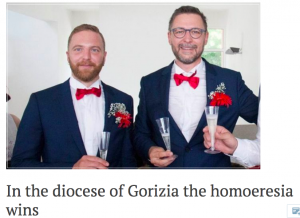 A little googling has quickly revealed the character of the bishop who made the intervention calling for the abolition of the traditional Mass.

Carlo Roberto Maria Redaelli is Metropolitan Ab. of Gorizia, the last diocese on the very furthest north eastern edge of the country, almost on top of the Dalmatic coast, a short drive to the border with Slovenia. Most recently Redaelli made the news by refusing to back up one of his parish priests who objected to having an adult male scout leader of the parish who was in a same-sex “civil union”.  The parish priest, upon discovering this, asked the guy to resign. Guy refuses, backed up by the curate. Parish priest appeals to bishop, bishop tells him to “make a discernment”. Priest discerns that the bishop is a homoheretic and resigns.

Demonstrating that this is a national test-case Redaelli played the “pastoral discernment” game, very loudly in the official newspaper of the Italian bishops’ conference, Avvenire, giving a long speech urging the parish to discover “where’s the grace” in this situation.

“Taking inspiration from the Acts of the Apostles, and in particular from the description of the Council of Jerusalem ( At15) – in which we found ourselves deciding how to organize coexistence between Christians coming from Judaism and those converted by paganism – Redaelli proposes to follow the same indication. Listening to the Spirit, without pretending to find pre-packaged recipes in the Scriptures or in the canonical tradition. The passage is found in a text by Carlo Maria Martini ( courageous Christians: lay witnesses in today’s time, Milan 2017) which Redaelli defines as ‘a great master of discernment’.”

It’s funny how these same issues and same names keep coming up again and again, isn’t it? Redaelli was ordained by Martini, as it happens. And of course, the same foggy, fuzzy language… We must avoid “pretending to find pre-packaged recipes in the Scriptures or in the canonical tradition” … that sodomy isn’t marriage… Ahem…just to clarify, in case anyone was falling asleep, what we’re actually talking about…

Redaelli’s pastoral intervention drizzled on and on, so I thought I’d slot in a few clarifying comments in blue italics:

“Redaelli recalls Paul’s passage in the Letter to the Romans (‘We know that everything contributes to the good, for those who love God.’ […including sodomy, apparently…]) But certainly not to conclude that everything – and in particular the choices made by the protagonists […to sodomise each other and undertake a mocking parodic sham of natural marriage and demand that everyone in the parish accept it…] of the story [the previously-mentioned butt-porkers] – can be defined well “in a simplistic way,” […sodomy and mockeries of the holy sacrament of marriage being very complex…] but to retrace the affair with the lamp of that discernment which, apart from Martini, is indicated as a virtuous practice also by Pope Francis in Amoris laetitia […hang on a sec your grace… we’ve lost the thread in all the obfuscation and blather… can you clarify? You mean discernment is the “virtuous practice” right? Not the butt-porking sodomy and mocking of the sacraments?]. The post-synodal Exhortation on the family [Amoris Laetitia] is explicitly recalled, summarizes Redaelli, that “whoever expects or always demands clear, abstract and unchangeable principles … can only be disappointed”. [Ssssooo, butt-porking is OK? Yes or no?] The criterion of humility and realism is all the more valid when one does not confront abstract principles, but with the intimacy of people’s feelings. Precisely the opportunity for comparison is the first of the aspects of grace indicated by the Bishop of Gorizia. As grace “is the progressive maturation of the conviction that discernment is increasingly becoming the fundamental cipher of pastoral action“. But also “respectful, participatory and sometimes suffered attention to the personal paths of each person”.

Right… so butt-porking is OK then?

Anyway, it seems his parish priest, Don Francesco Fragiacomo (ten years in the place), had asked similar questions and probably received the same gobbeldygook and interpreted it correctly to mean “yes.”

And the result, as the author of the Cattocomunismo blog put it, was “The ‘homophobic’ parish priest leaves, the scout leader remains.”

“The bishop had asked to make discernment. Well. I did it. The head scout is still in its place and I have concluded that I would feel conniving with this situation if I could not do anything. So it was and then, despite feeling morally in pieces, in April I resigned as parish priest.”

And did the bishop reject this?

Don Francesco explained to his parishioners that in this way, “I was prevented from exercising my ministry as parish priest in charge of pastoral care as I should speak with the scouts and instead I have to pretend nothing happened. The Bishop has deserted me and has not supported me,” he vented. And he added: “With this scandal under the eyes of all I can not fully and serenely exercise my mission as parish priest.”

And these days that also nearly always means a love of the “homoheresy” and it’s funny too how it always circles back to the principles of Amoris Laetitia, doesn’t it?

Because no one thought that thing was going to be used to justify approving homosexuality, or to persecute and remove priests who want to uphold the teaching of the Church in their parishes… No. One.